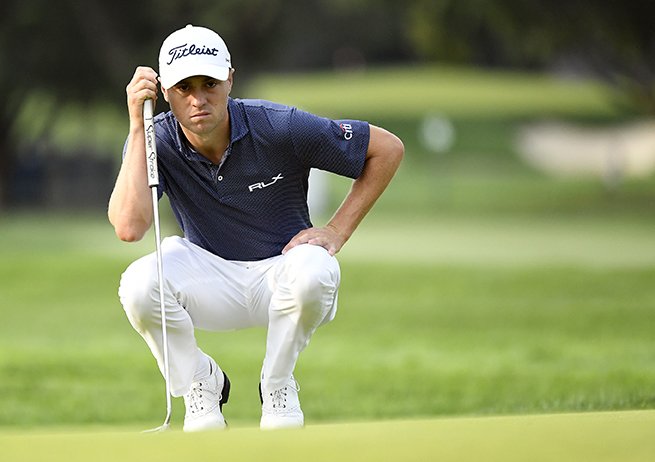 World number three Justin Thomas fired his lowest opening score in a major and held a one-shot lead after the first round of the U.S. Open

World number three Justin Thomas fired his lowest opening score in a major and held a one-shot lead after the first round of the U.S. Open on Thursday, while Phil Mickelson and Tiger Woods were among a slew of big-name players well off the pace.

Thomas, who has one top-10 finish in five U.S. Open starts and missed the cut last year at Pebble Beach, drained a 24-foot birdie putt at the 18th for a five-under-par 65 at a Winged Foot layout that has yet to bare its teeth.

“It’s one of the best rounds I’ve played in a while tee to green,” said Thomas, who needed only 28 putts on Winged Foot’s wildly undulating and speedy greens.

“There are a couple things here and there that definitely could have been better, but I made sure all of my misses were in the right spot, and that’s what you have to do at a U.S. Open.”

Four-times major champion Rory McIlroy, in his first start since becoming a father on Aug. 31, was among a group of three golfers two shots off the lead and the Northern Irishman later credited a new approach for his solid start.

“First round of a major you’re always anxious to play well, and maybe I’ve overthought it at times,” said McIlroy. “I just went out today and just took what was given to me a little more relaxed and played really nicely.”

Mickelson, who suffered one of his record six U.S. Open runner-up finishes at Winged Foot in 2006 and entered this week seeking the final piece of the career Grand Slam, birdied his first two holes before struggling to a nine-over-par 79.

“Yeah. I don’t know what to say. It’s a disappointing day,” said Mickelson, who also carded nine bogeys and a double-bogey.

“It’s a spectacular golf course, great design, awesome setup, and I thought it was a good opportunity to score low today. I just played terrible.”

Woods (73) made a bogey at 17 and ended his round with a double-bogey as his approach rolled off the front of the green before he chunked a chip shot and missed a breaking bogey save.

“It was a bit of ebb and flow to the round today,” said Woods. “I did not finish off the round like I needed to.”

The U.S. Open was originally scheduled for mid-June but was postponed because of the COVID-19 pandemic and is being played in September for the first time since 1913 and is the first of six majors that will be held over the next 10 months.

Condensed Champions League to start under shadow of Covid-19