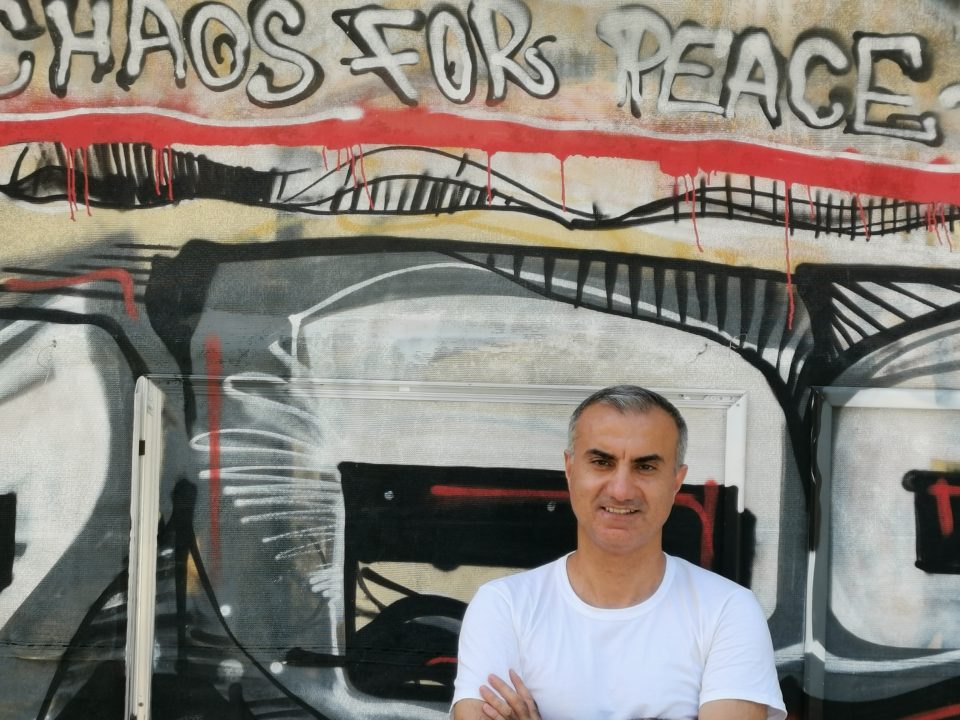 A renowned 46-year-old Iranian singer, songwriter and music producer has been stranded in the Ledra Palace buffer zone since Wednesday after the Greek Cypriot authorities repeatedly denied him access to the asylum services of the Republic.

Omid Tootian, persecuted in his own country for his anti-regime songs, arrived in the north of the island from Turkey some two weeks ago. He was quarantined for a week at a hotel and had his PCR test done three times. The first was in Turkey before his departure for Tymbou (Ercan), the second, after his arrival in the north, and the third in time to have the test results in his possession when he appeared at the Ledra Palace checkpoint asking for asylum.

After the initial refusal of entry into the Republic, Tootian tried his luck again next day, Thursday, with the help of a representative from Kisa but was again rejected. Finally, on Friday, he renewed his efforts only to be turned back into the buffer zone twice by Greek Cypriot police despite the best efforts of the Unficyp Ledra Palace Unpol unit to help negotiate his right of passage.

“We cannot let him through because we have orders from the Chief of Police not to allow anybody in,” of the RoC police guarding the Ledra Palace crossing checkpoint responded when asked why Tootian was refused entry. “We were told not to allow in anybody who came from Turkey”, he explained.
Tootian. an artist who has thousands of followers on YouTube, told the Cyprus Mail that he had left Iran about two years ago.

“Before that I tried to stay in my country because it is important for me be there. Sometimes, when the situation was difficult and I thought they could arrest me I would go to Turkey for a couple of weeks or months but then when I knew that the situation was better I would go back to Tehran. Two years ago, I knew

I had to leave for good. Unfortunately, now the situation in Turkey is not good either. The Turkish government started deporting some of the Iranian activists back to Iran. Two of them were sentenced to death in Tehran in July. That is why I decided to come here.”

According to the International and European Human Rights Law, the Republic of Cyprus authorities have an obligation to allow anybody who seeks asylum in Cyprus to have access to its asylum services.

“If somebody approaches one of the crossings and says he or she wants to apply for asylum the authorities have an obligation to allow then in and to direct them to the right procedures,” Corina Droushiotou, a senior legal adviser with the Cyprus Refugee Council, told the Cyprus Mail..

The Immigration Office is responsible to the Chief of Police while the Asylum Services fall under the umbrella of the Ministry of Interior.

Doros Polykarpou of KISA told the Cyprus Mail that before the pandemic that there have been cases of people approaching the crossings asking for asylum. Even though the authorities initially caused “some difficulties”, at the end of the day, they were allowed to pass. “But now they say they cannot allow Tootian to pass because of the Covid which is totally wrong because to start with he has had three tests done and he passed a quarantine. Furthermore, even if he didn’t have these certificates, he should have been given access because there are other means to ensure the public health safety.”

However, a migrant expert who wants to stay anonymous disagreed.
“The decision of what to do with him should have been made by the ministry of interior and not police to start with. It is their responsibility to ensure that all the norms related to international protection and access to the asylum process are observed,” said the expert.

Police spokesman Christos Andreou told the paper he was unable to comment because he “hasn’t heard about the case”.

The Unhcr has been briefed by Kisa about the situation. The Cyprus Mail was told they are trying to negotiate with the RoC authorities to let the artist in.

Meanwhile, Tootian has been sleeping in an abandoned building in the buffer zone next to the Home For Cooperation since Wednesday. He says he has no other option since he is afraid that if he goes back to the north he risks being deported to Turkey and from there to Iran where his life is in danger.

According an article published in The Times last July, at least seven dissidents have been deported from Turkey to Iran since 2017, potentially in breach of the international law that prohibits states from returning individuals to countries where they will face persecution or torture. All are now in prison back in Iran. A further five are detained in Turkey and awaiting deportation.

In July, Iran’s Supreme Court upheld death sentences for two of those who were deported from Turkey. Saeed Tamjidi, 28, and Mohammad Rajabi, 26, were sentenced for taking part in widespread protests in Iran last November.

Following an international outcry, including tweets from US President Donald Trump, it was later announced that their appeal for a retrial at the Supreme Court has been accepted.
Relations between Turkey and Iran have been improving since 2017 when they started to work together with Russia on a process to end the Syrian conflict.