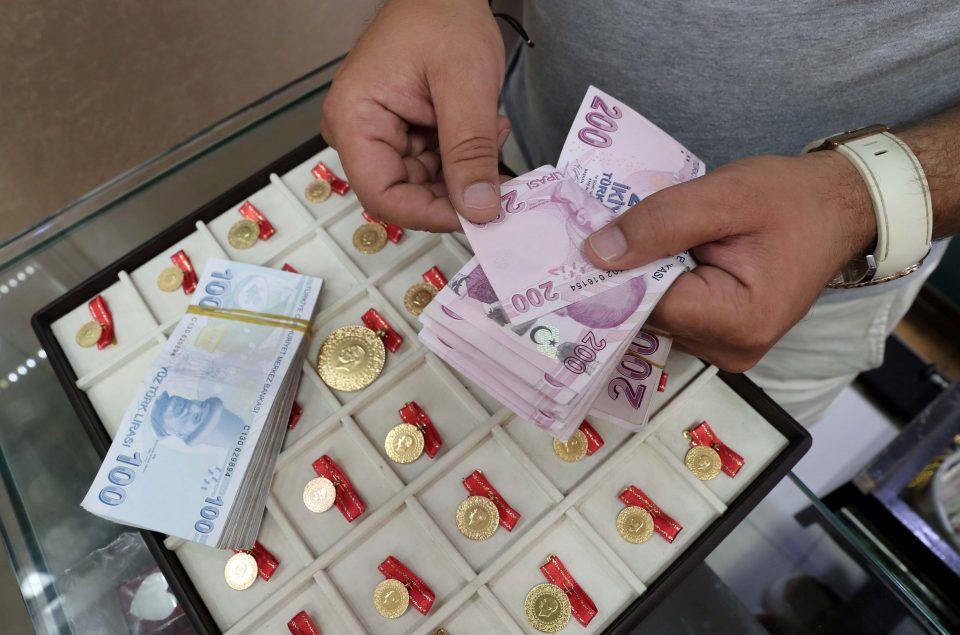 Although President Recep Tayyip Erdogan may have told supporters in Istanbul last Saturday that, “Turkey is currently at a peak economically – not at the bottom, but the ceiling,” these days, many ordinary Turks may have cause to disagree.

The Turkish Lira (YTL) has lost nearly a third of its value against the euro since the start of the year, while youth unemployment now hovers around 25%, with many out of work for more than a year.

The key tourism industry lost around a third of its custom this summer, due to the pandemic, which also caused a collapse in demand globally for goods and services, impacting Turkey’s export-driven economy particularly badly.

At the same time, foreign investors – once responsible for around 40% of the Turkish bond and equity markets – now represent just 5%, with a recent downgrade from ratings agency Moody’s bestowing ‘junk’ status on much of what remains.

After months of trying to prop up the YTL, too, the Turkish central bank and many of the country’s commercial banks are dangerously short of hard currency – and increasingly cut off from the international financial markets that might help them.

“This isn’t just a fluke or a glitch, either,” Aykan Erdemir, a former Turkish MP and Senior Director of the Turkey Programme at the US-based Foundation for the Defence of Democracies, told Cyprus Mail. “Since well before the pandemic, there has been a deep economic crisis going on, triggered by major flaws built into the economic management of the country.”

Ironically, however, those same flaws may also now be obstacles to any serious attempt to address the crisis.

After nearly two decades in power, Erdogan’s Justice and Development Party (AKP) has removed many of the regulatory mechanisms and independent authorities set up after the last big, Turkish economic crisis, back in 2000-2001.

Lucrative government contracts have often been given to loyal, AKP supporters, while members of Erdogan’s own family have powerful positions in the economy.

Changing all this, critics say, is both necessary to address the deep structural problems of the economy – and impossible to do now, without undermining the very power structure on which Erdogan’s rule has come to depend.

“This is where Turkey’s erratic foreign and security policy comes in,” adds Erdemir. “For Turkey’s neighbours, too, this is really bad news.”

Indeed, “Erdogan and his government have always been good at distracting people from their economic woes by getting them to rally round the flag,” Davide Luca, Turkey specialist and Visiting Fellow with the London School of Economics Middle East Centre, told Cyprus Mail.

The Turkish government’s increasing troubles at home now march alongside increasing belligerence abroad – and “Erdogan has never shied away from using force,” warns Erdemir. “In Syria, he certainly didn’t stop at just rhetoric.”

For Turkey’s economy, recent years have seen the end of a long boom time.

Turkey saw strong economic growth and a major building boom, with the AKP benefitting from both.

Yet, “Economic growth was kept alive by debt,” adds Luca. “And now the country’s running short of money.”

A currency crisis in 2018 – partly triggered by a growing spat with the US and the threat of sanctions – shook the YTL, with the central bank making major efforts to try and shore it up since then. This has emptied the country’s dollar reserves, while the YTL has continued to fall.

The COVID-19 crisis has also hit demand for Turkish exports and hit tourism revenues – usually paid in dollars or euros.

The government also undertook similar policies to other countries when it came to trying to keep businesses and jobs afloat during the partial pandemic lockdown.

This, however, meant a major jump in government expenditure, again at a time when the budget was already under strain.

“It will have to continue to spend, too, as the pandemic continues,” Enver Erkan, Economist with Tara Yatirim in Istanbul, told Cyprus Mail. “The government will have to protect economic activity and the labour force, going forward, particularly if there’s a second wave of infections and another lockdown.”

Daily COVID-19 cases have been rising steadily since a July low, with the Turkish Medical Association chair, Sinan Adiyaman, saying Wednesday that the country was “back to square one in the fight against the pandemic,” with numbers of infections now similar to those in March.

At the same time, uncertainty over the Turkish authorities’ responses adds to a sense of unease amongst global investors.

In recent times, the central bank has lost much of its independence, coming increasingly under pressure from Erdogan to keep credit easy and cheap by setting low interest rates.

“Heavy handed interference has been Erdogan’s response,” says Erdemir. “Along with a drift away from the rule of law, transparency and accountability.”

This also makes an appeal for outside aid less and less likely.

“An IMF bailout would come with strings attached,” says Erdemir, “and Erdogan cannot afford that. It would undercut his domination of the Turkish political system.”

For some, the actions of the credit agencies, the IMF and other international institutions are part of the problem, however, rather than the solution.

“The general public here divide the blame for economic problems into three,” Can Selcuki, leading analyst and pollster with market research company Istanbul Economics, told Cyprus Mail. “First of all, they blame foreign actors out to ‘get’ us. Then it’s coronavirus and finally its economic mismanagement – but not necessarily by Erdogan, more his ministers.”

Foreign – mainly Western – institutions are widely mistrusted, with these often coming under attack from government and AKP officials.

Finance Minister Berat Albayrak – Erdogan’s son-in-law – railed against an “unjust and unfair system,” in an August debate on Turkish TV, which Turkey “revolts against”. An earlier, 2018 currency crisis he blamed on “an attack planned in a foreign capital”.

“Everything these days is described as an ‘existential threat’ to Turkey,” says Erdemir. “The point is to keep the country on the edge of immanent war at all times – to keep the population constantly on edge.”

Whether Turks will tire of this is perhaps now the central political question in the country, with the fortunes of the economy itself now weaponised into a national struggle, rather than a matter of imports and exports, market rules and exchange rates.

“It’s the million dollar question,” says Luca. “What will be the consequences? The government is in serious trouble, but distracting the public from that is something Erdogan has been doing successfully for a very long time.”