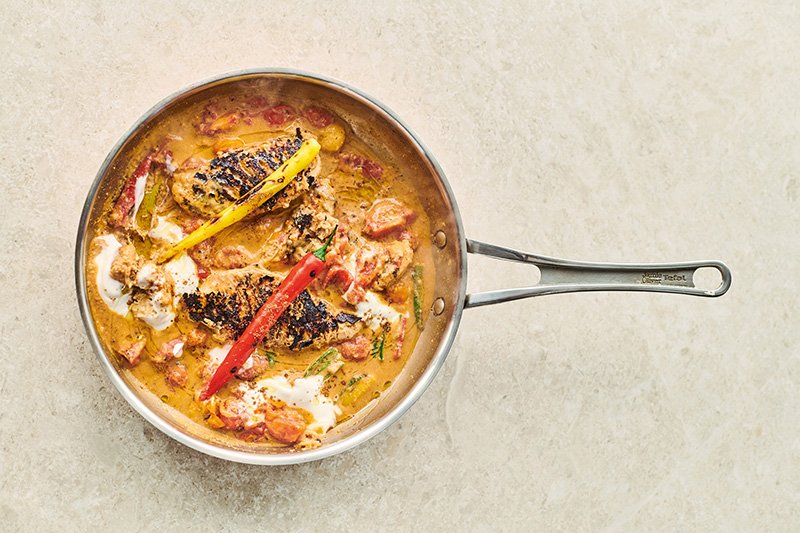 The concept behind Jamie Oliver’s new cookbook, 7 Ways, is to take staple ingredients and elevate them.

He champions 18 ‘hero’ ingredients and provides a week’s worth of recipes for each – that are likely to stretch your culinary imagination slightly. Think Bombay jacket spuds, crispy sweet and sour salmon, a prawn toast toastie, and a steak sandwich, Japanese-style.

To see just how versatile, tasty and straightforward Oliver’s latest offering is, we tested two recipes (hero ingredients: eggs and chicken breasts). Here’s how we got on…

I do eat a lot of eggs (mainly because I’m vegetarian) and always have them in stock. But I do use them in a lot of the same old ways – poached and plonked on toast, whisked up into a frittata or crustless quiche, or simply boiled to dippy perfection, so soldiers can be dunked into them. But on a hot, summery day, this ‘sunshine salad’ makes a great midweek meal.

Though I most definitely always have eggs in, there were other ingredients in this recipe I had to buy specifically. Jarred peppers (I would normally just roast my own), pomegranate and especially the dukkah, needed to be sought out especially.

Making the recipe is pretty straightforward – as is Oliver’s style. You only really need to toast the dukkah then cook off the grains and peppers, wilt the spinach and poach the eggs. The only part that didn’t quite work out was the juicing of the pomegranate, which just didn’t happen. The tiny amount of juice I did manage to get out of it squirted its way across my worktop. I didn’t really fancy scraping it up and stirring it through the yogurt (though I agree, it would have looked much prettier) and I’m not convinced it would have been enough anyway.

The finished dish was utterly delicious – and hugely elevated by the dukkah and pomegranate, so genuinely worth seeking out those extra additions.

Butter chicken is not, admittedly, the most exciting curry out there, but for an easy weeknight bowl of something comforting, it’s a solid choice for a ‘fakeaway’.

This one relies on fridge staple chicken breasts.

Oliver tries to mitigate any issues with a thick yoghurt, garlic, ginger and garam masala marinade, which definitely helps. Charring the chicken on either side also brings a depth of flavour and pleasing smokiness that might be lacking otherwise (there’s no whole ground spices involved).

From start to finish, it’s a pretty swift operation, and the only ingredient I needed to make an effort to track down was cashew butter (peanut would have worked in a pinch though, I reckon). And it would have ended up quite mild if we hadn’t used homegrown cayenne chilli peppers (arguably, these were slightly too hot).

We scooped up the sauce with toasted pitta, and I added a handful of chopped coriander and a spritz of lime for a bit of acidity, zing and greenery. Some mango chutney wouldn’t go amiss either. Substantial and straightforward, if not revolutionary.

Put a large pan of salted water on to simmer for your eggs. Toast most of the dukkah in a large non-stick frying pan on a medium heat for 2 minutes, then tip in the grains. Drain, finely chop and add the peppers. Cook and stir for 5 minutes, season to perfection, then divide between your plates. Return the pan to the heat and quickly wilt the spinach. Season to perfection and divide over the grains.

Halve and deseed the chillies. Place in a large non-stick frying pan on a high heat with the tomatoes and blacken all over, turning occasionally. Meanwhile, peel the garlic and ginger, and finely grate into a large bowl. Add most of the garam masala, a pinch of sea salt and black pepper and 1 tablespoon of yoghurt. Deeply score the chicken breasts at 1cm intervals, then massage with the marinade.

Once charred, remove the tomatoes and chillies to a board, returning the pan to a medium heat with ½ a tablespoon of olive oil and the chicken. Cook and char for 10 minutes, turning halfway, while you pinch off and discard the tomato skins and roughly chop 1–2 of the chillies, to taste. Remove the gnarly chicken from the pan and go in with the tomatoes, chopped chillies and cashew butter. Pour in 250ml of boiling kettle water and stir to pick up the sticky bits. Let it bubble vigorously for 2 minutes and once it starts to thicken, return the chicken to the pan, turning in the sauce for a final 2 minutes, or until cooked through, then remove to a board. Off the heat, season the sauce to perfection, then ripple through the remaining yoghurt. Slice the chicken and serve with the remaining chilli and garam masala.

7 Ways by Jamie Oliver is out now