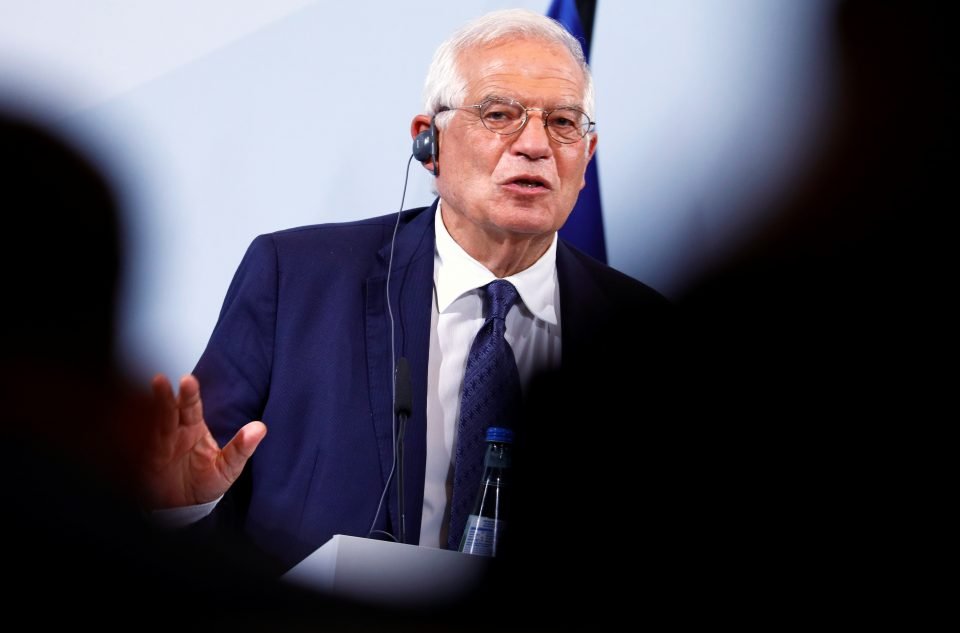 Despite  an appeal by the country’s main opposition leader, European Union foreign ministers failed to agree sanctions against Belarusian officials on Monday, as Cyprus dug its heels in, demanding sanctions against Turkey in return.

“Our reaction to any kind of violation of our core, basic values and principles cannot be a la carte. It needs to be consistent,” Foreign Minister Nikos Christodoulides said.

Though the EU announced plans for the sanctions last month, enacting them requires support from all 27 member states. Cyprus wants a deal first on measures in its dispute against Turkey over gas exploration.

“Although there is a clear will to adopt the sanctions, the required unanimity was not reached,” the EU’s top diplomat Josep Borrell, who chaired the meeting of foreign ministers, told reporters, referring to EU rules that all 27 states must agree. “It is no secret that we do not have unanimity because one country does not participate in unanimity.”

He noted that it was not even on the agenda as Coreper acknowledged that since Friday there has been no unanimity.

Approval is still possible by EU leaders at a summit on Thursday and Borrell said that by the next time foreign ministers meet on October 12, the sanctions would be agreed. But he also acknowledged the paralysis was damaging for the EU’s image.

“If we are not able to (approve Belarus sanctions), then our credibility is at stake,” Borrell told a news conference.

“”I have not accused Cyprus of anything. When did I do it? “We just miss Cyprus in order to have unanimity,” Borrell told reporters after the meeting.

Latvian Foreign Minister Edgars Rinkevics lashed out on Twitter against Cyprus. “It is regrettable that today we could not decide on sanctions on violations of human rights there due to ‘a hostage taking’ by a member state. Sends a wrong signal to Belarusians, our societies and the whole world,” he said on Twitter.

Borell said it was a “high-voltage political problem that the European Council must address.” “I understand the position of Cyprus,” Borrell said, referring to the talks in Berlin and recalling that it had been decided that if Turkey did not change its position – “and it did not change it”, he noted – the additional listing would proceed.

He added: “there are discussions (with Turkey) now.”

Asked to explain the parallel sanctions process against Turkey and Belarus, based on Gymnich`s decision, the high representative replied that “the decision was that the new listings would be prepared as soon as possible.”

“We did not say that before Belarus we would do it for the eastern Mediterranean and vice versa,” he added.

“It is up to the European Council to look into the relationship with Turkey,” Borrell said, adding that the foreign ministers would be instructed by the heads of state and government.

Of Belarus, the 27 Ministers sent the message that they do not recognise the result of the elections due to the violence and fraud by the regime and called for new free elections under the supervision of the OSCE, Borrell said.

Borrell emphasised that the 27 were calling for a national dialogue, the avoidance of interference of third parties in the country, and reiterated their support for the people of the country`s right to self-determination, saying the EU had no “hidden agenda”.

After a sixth straight weekend of huge protests against President Alexander Lukashenko, opposition leader Sviatlana Tsikhanouskaya travelled to Brussels to try to convince the EU to follow through on a sanctions threat it announced last month.

Back in Minsk, a city court rejected a legal appeal from the defence team of Tsikhanouskaya’s political ally, Maria Kolesnikova, against her detention.

Kolesnikova was jailed after ripping up her passport to prevent the Belarusian authorities from forcibly expelling her to Ukraine. She was charged last week with calling for “actions aimed at undermining Belarusian national security”.

About a hundred supporters gathered in and around the courthouse. Kolesnikova was not in court in person but when she appeared on a video screen people inside began to applaud.

The presidents of Lithuania, Poland and Romania said on Monday they will ask EU leaders at this week’s summit to offer an economic support package for Belarus if it holds a democratic election. That would include a favourable trade regime with the EU, visa-free travel and support as a candidate for the World Trade Organization.

“EU leaders have reasons not to push sanctions but I asked them to be more brave,” Tsikhanouskaya, who fled to Lithuania after the election, told reporters after meeting foreign ministers.

“Sanctions are important in our fight because it’s part of pressure that could force the so-called authorities to start dialogue with us in the opposition council.”