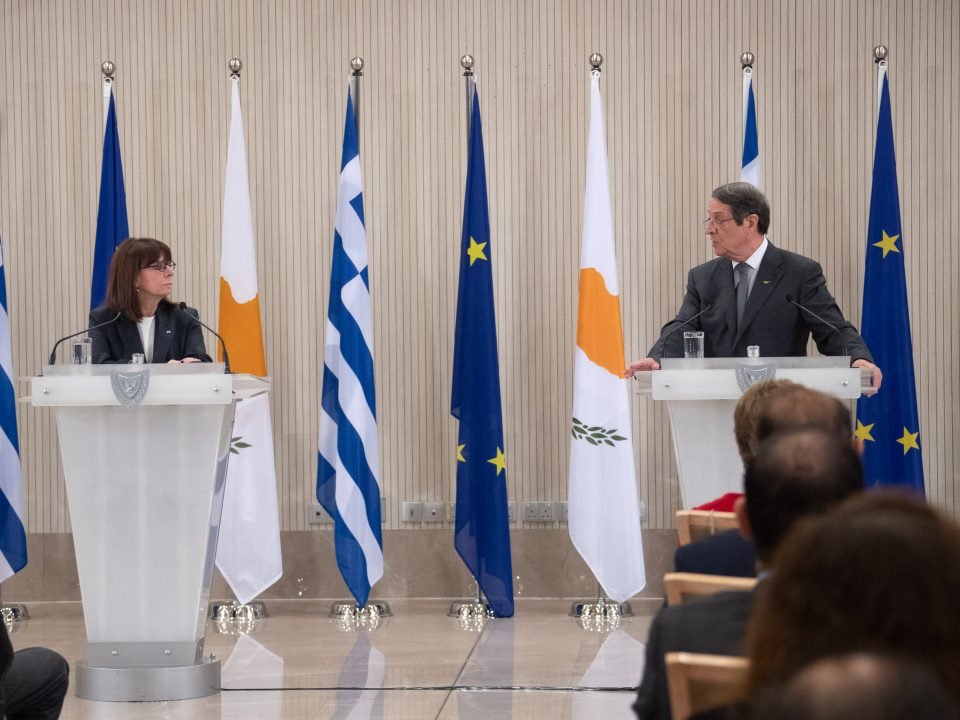 Greece’s President Katerina Sakellaropoulou started a two-day visit to Cyprus saying she had discussed the EU’s response to Turkey’s unlawful actions in the eastern Mediterranean with President Nicos Anastasiades.

This is the Greek president’s first visit abroad since taking up her duties in March, demonstrating she said the importance of the Cyprus issue in Greece’s national policy and coming only days before an EU Summit on Turkey.

The visit comes at a critical juncture given Turkey’s provocations and proves that Greece and Cyprus have a united diplomatic front, driven by national interest and with absolute respect for international law, she said.

Her talks at the Presidential Palace on Monday focused on the situation in the Aegean and east Mediterranean, the Cyprus issue and the migration issue, she added.

The departure of Turkey’s seismic ship Oruc Reis from the Aegean was a positive first step toward de-escalation, but it remains to be seen whether it was a short-term tactical move.

The two presidents also discussed prospects for a Cyprus settlement with Sakellaropoulou voicing Greece’s readiness to contribute, under the right conditions, for the resumption of the peace process where it had stopped art Crans-Montana in July 2017.

The fenced city of Varosha, which Turkish Cypriots have said they plan to reopen in contravention on UN resolutions was also discussed as was the question of the missing.

On the migration issue, she said the new EU policy now being drafted should give tangible proof of the principles of EU solidarity and provide for equal distribution of the burden among member states.

Greece and Cyprus have had to carry more than their fair share of the burden and this must be understood, she added.

Welcoming the Greek president to Cyprus, Anastasiades said Turkey’s violations in international law and destabilisation of the region were a problem not only for Greece and Cyprus but the EU itself, as the two countries are external borders of the bloc.

Earlier at the Presidential Palace, Anastasiades also presented Sakellaropoulou with the Grand Collar of the Order of Makarios III as a gesture of gratitude to Greece’s longstanding support for a Cyprus settlement.

Later Sakellaropoulou will meet with Archbishop Chrysostomos and will hold a meeting with Parliament President Demetris Syllouris and the leaders of the political parties. She will also address a special plenary of the House.

Speaking in parliament, the Greek president said her country fully shared concerns over the dangerous and potentially catastrophic consequences on efforts to reunite the island if Turkey carried out its threat to settle Varosha, in violation of UN Security Council resolutions.

Sakellaropoulou said Greece’s top concern remained the termination of Turkish occupation and finding an agreed solution to the Cyprus problem.

“The unwavering focus on this peaceful goal … strengthens Greece, unites, rallies, and mobilises my country’s social and political forces,” she said.

Settling “this important international issue of invasion and occupation would contribute decisively to the security and stability of the wider area of the eastern Mediterranean.”

The Greek president said her country has made it clear to everyone that there cannot be a solution to the Cyprus problem without abolition of the obsolete and unsustainable system of guarantees and unilateral rights of intervention in Cypriot affairs.

“The main aim today is the resumption of negotiations when the suitable conditions are created,” she added.

Coronavirus: US donates PPE worth €15,000 to Famagusta hospital