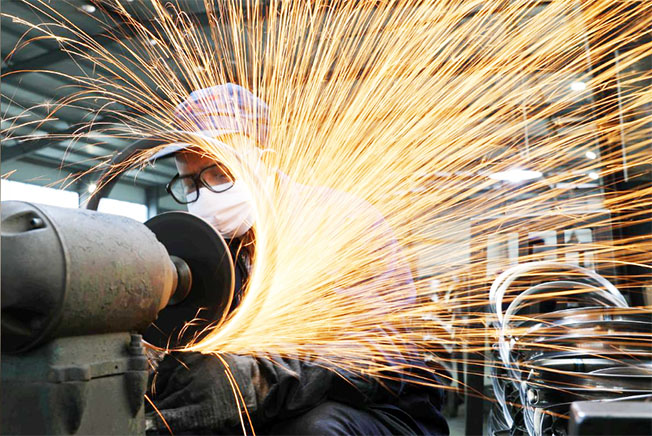 British manufacturers see no evidence of a ‘V’-shaped recovery from the coronavirus pandemic underway and many are planning to slash investment, a business survey showed on Monday.

The Make UK industry association and accountants BDO said output and orders had improved from historic lows struck last quarter during the depths of the pandemic.

But the survey’s quarterly gauge of investment intentions fell to -32 per cent from -26 per cent, almost touching depths last seen in the financial crisis.

“Manufacturing has begun to climb away from the abyss that it stared into earlier in the year,” said Stephen Phipson, chief executive at Make UK.

“But, make no mistake it is going to be a long haul back towards normal trading conditions, with talk of a ‘V’-shaped recovery nothing more than fanciful.”

The possibility that Britain and the European Union fail to agree a trade deal before the end of the Brexit transition period would be a “final nail in the coffin” for many manufacturers, Phipson added.

Output in Britain’s manufacturing sector was still 8.7 per cent below its pre-pandemic level in July, according to official data published earlier this month.

Like other indicators of the labour market, manufacturers’ employment expectations deteriorated in the latest Make UK/BDO survey, although its gauge of future output improved somewhat.

The resurgence of coronavirus across Europe is likely to slow the UK’s economic recovery which had been exceeding expectations, the Bank of England’s rate setting committee said after its September meeting. Trade is also disturbed by the ongoing, and so far unsuccessful negotiations for a Brexit free trade agreement — these negotiations are still ongoing, but major issues remain to be agreed upon.

The survey of 364 companies was conducted between Aug. 5 and Aug. 26. Make UK is an organisation for UK manufacturers which works to create a supportive environment for a competitive manufacturing sector.

U.S. fuel demand has fallen 13 per cent year-on-year, according to the U.S. Energy Information Administration. Autumn is typically when use of heating oil and diesel rises, but with more than 179 million barrels in storage, nearly a record, refiners have no incentive to keep units running.

The Paris-based International Energy Agency cut its forecast for global oil demand for 2020 for the second time in two months last week due to the faltering recovery. The energy watchdog forecast global consumption of petroleum and liquid fuels will average 91.7 million barrels per day for all of 2020, a reduction in its previous forecast of 200,000 bpd and down 8.4 million bpd from 2019’s 100.1 million bpd level.

U.S. refiners are still producing 20 per cent less fuel than before the pandemic. Chinese, Indian, Japanese and South Korean refineries cut their utilization rates from July and August.

“Even with a U-shape economic recovery, demand potentially is going to be around 2 million bpd below where it was in the fourth quarter of 2019,” David Fyfe, chief economist at Argus, said on a webinar earlier this month.

Asia’s fuel output could fall further during seasonal maintenance between September and November, and several facilities worldwide are expected to close.

Average utilization rates at Chinese state-owned refineries were at around 78.6 per cent by end-August, down around 3.6 percentage points from July, data compiled by China-based Longzhong consultancy showed.

Australia’s Viva said it may be forced to permanently shut its Geelong Refinery in Victoria to curtail losses unless coronavirus-led restrictions are eased and demand picks up. The Australian government has proposed spending billions of dollars to keep the country’s four remaining refineries open.

Singapore’s complex refining margins, a bellwether for Asia, were negative in the first half of September, after turning slightly positive in August following four straight months of losses.

In the United States, the refining margin is hovering around $9 a barrel, near its lowest levels in April. Refiners typically do not turn a profit on products unless the crack spread – the difference between crude and fuel – is higher than $10.

Several refiners in the Philadelphia and Chicago area have put off planned work this autumn to save cash, according to sources familiar with those plants. In total, fewer refineries than usual will shut for seasonal maintenance.