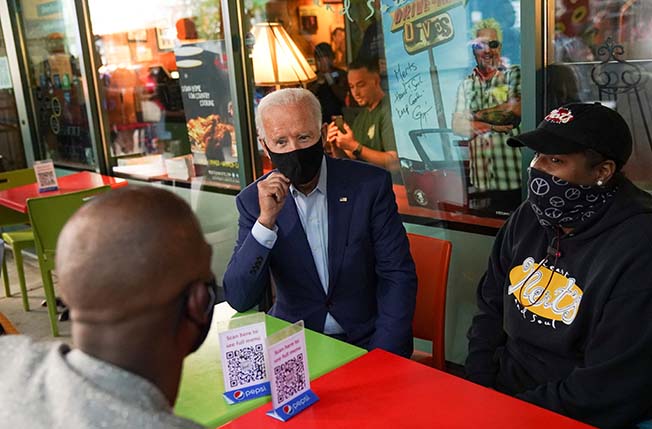 Democratic presidential nominee Joe Biden on Wednesday said black turnout was the linchpin to his hopes of winning the White House in November and reversing economic and social inequities that have held back African Americans.

Noting that the coronavirus pandemic had hit the minority community especially hard, Biden said black Americans would only achieve equality once they were in a position to build wealth, and voting was the starting point.

“There’s only one way to do it. We gotta show up and vote,” he told a black economic summit in Charlotte, North Carolina, where he vowed to boost black home ownership and push other policies to help African-American workers and businesses.

Biden has targeted North Carolina, where Republican President Donald Trump won by about 4 percentage points in the 2016 election, as a state he might reclaim in the Nov. 3 vote.

Wednesday’s trip was Biden’s first to North Carolina since winning the Democratic nomination. Trump has visited the state a number of times recently.

A Reuters/Ipsos opinion poll shows Trump and Biden running neck and neck in the state, which also has a crucial U.S. Senate race.

About one-fifth of the electorate in North Carolina in 2016 was black, according to exit polls, and turnout among African Americans in the state could decide the vote.

The first dip in black turnout in 20 years contributed to Democrat Hillary Clinton’s surprise loss to Trump in 2016.

Some of Biden’s supporters, however, worry that the Democratic candidate has waited too long to engage Black voters in North Carolina.

“I don’t think they are hollow observations. He could have been more aggressive early on,” said Dan Blue, the Democratic minority leader in North Carolina’s Senate and a Biden supporter. “That being said, things are really ramping up right now and people are feeling the urgency.”

Race relations have re-emerged as a flashpoint in U.S. politics this year in the wake of killings of Black Americans by police, including George Floyd in Minneapolis and Breonna Taylor in Louisville, Kentucky.

A Kentucky grand jury voted on Wednesday to indict one of three white police officers involved in the shooting death of Taylor for wanton endangerment.

Democrats have accused Trump of inflaming race relations with divisive rhetoric and are hoping to galvanise black support at the polls. The Republican president counters that his policies have helped Blacks.

Voters in about half a dozen states have begun casting early in-person ballots, and election officials predict a surge of early and mail-in voting this year as people try to reduce their risk of exposure to the coronavirus.

Biden has slammed Trump’s handling of the pandemic, which has killed more than 200,000 Americans, while Trump has said his actions saved lives.

The pandemic has fueled a slew of lawsuits across dozens of states over efforts to ease mail-in voting restrictions. On Tuesday, North Carolina election officials agreed to count absentee ballots received up to nine days after Election Day, as long as they were postmarked by Nov. 3.

Courts in several other key states, including Michigan, Wisconsin and Pennsylvania, have also extended absentee ballot deadlines despite Republican opposition.