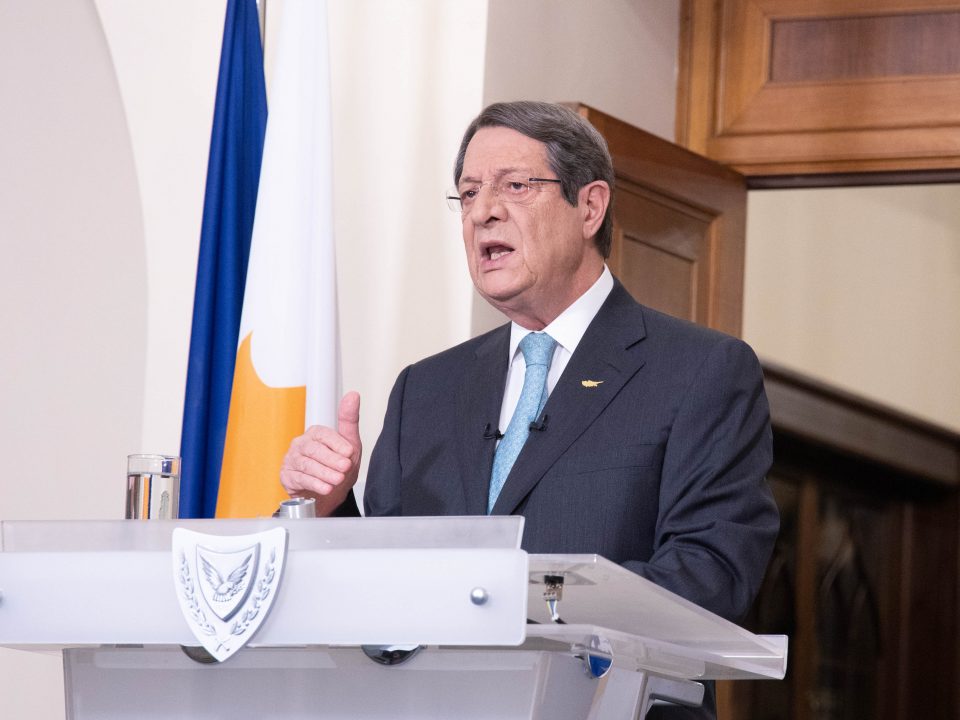 Cyprus expects diplomatic and political solutions to the Turkish issue from the EU Council summit, which has been postponed until October 1 and 2, President Nicos Anastasiades was quoted as saying on Thursday.

The president, in an interview with French daily Le Figaro, also said Cyprus was not blocking EU sanctions on Belarus in exchange for sanctions on Turkey, despite reports last week from the EU foreign affairs council saying as much.

Politis, citing political analysts and sources close to the government on Thursday, reported that Nicosia was now having second thoughts about playing the veto card following pressure by other EU members.

The paper said that despite the presidential palace’s position that it would keep the same line as it believes that a message must be sent to Turkey, on Wednesday a slight shift was observed after Foreign Minister Nicos Christodoulides said that the postponement of the EU summit was a good opportunity to allow consultations to continue for the de-escalation of tensions.

The statements hinted that the government expected results from initiatives with Ankara undertaken by Germany, France and the EU.

“But we insist that there be no selective sensitivity to violations of international law or human rights.”

This is why the government wants a diplomatic and political solutions coming from the EU.

The president said that for quite some time, Turkey has been trying to impose its illegal claims in the Eastern Mediterranean violating Greece’s maritime space and the exclusive economic zone (EEZ) of Cyprus.

“We are witnessing an expansionist policy of Turkey throughout the region, up to Syria and Libya,” he added.

“Let us be clear now, Turkey’s challenges are, in fact, an invasion of the Cypriot EEZ. That is why, at the informal meeting of the Council of Foreign Ministers in Berlin, we all reached an agreement on the extension of some existing sanctions against Turkey, because we want to send a clear message to it: that its behaviour cannot go unanswered and without consequences. We will respond with deeds, not just words.”

As far as the EU dragging its heels on initiating a stand-off with Turkey, Anastasiades said Turkey has become a troublemaker in the region, endangering security and peace, as well as the EU.

“I regret to note that the EU has not acted unitedly and decisively in tackling this situation,” he added.

However, the position of France, of President Emmanuel Macron, was the most decisive as it showed a clear and strong determination to oppose Turkey’s illegal actions.

He is a ray of hope to save the principles and values ​​of the European Union and to defend international law, Anastasiades said.

If the EU decisions were such as to prompt Turkey to end its illegal activities in the territorial waters of Cyprus, as well as its threats and plans to settle the fenced-off area of Varsha in Famagusta, then the necessary conditions would be on the table for a constructive dialogue on the Cyprus issue, the president said.

He added that the Greek Cypriot side had responded positively to the intention of the UN Secretary-General to convene a new conference on Cyprus. “Unfortunately, Turkey rejects it.”

Anastasiades also welcomed the prospect of a dialogue between Athens and Ankara, saying Cyprus had also asked for such a dialogue with Turkey clarifying that Cyprus would be ready to refer the maritime dispute to the International Court of Justice in The Hague.

“Unfortunately, Turkey did not respond and preferred to violate the EEZ of the Republic of Cyprus,” the president said.

He also made it clear that despite the ongoing issues with Ankara, Cyprus’ energy programme had not changed. Due to the pandemic, the government was currently in the process of redefining the schedules.

“This is a sign of confidence on the part of these companies,” he said.