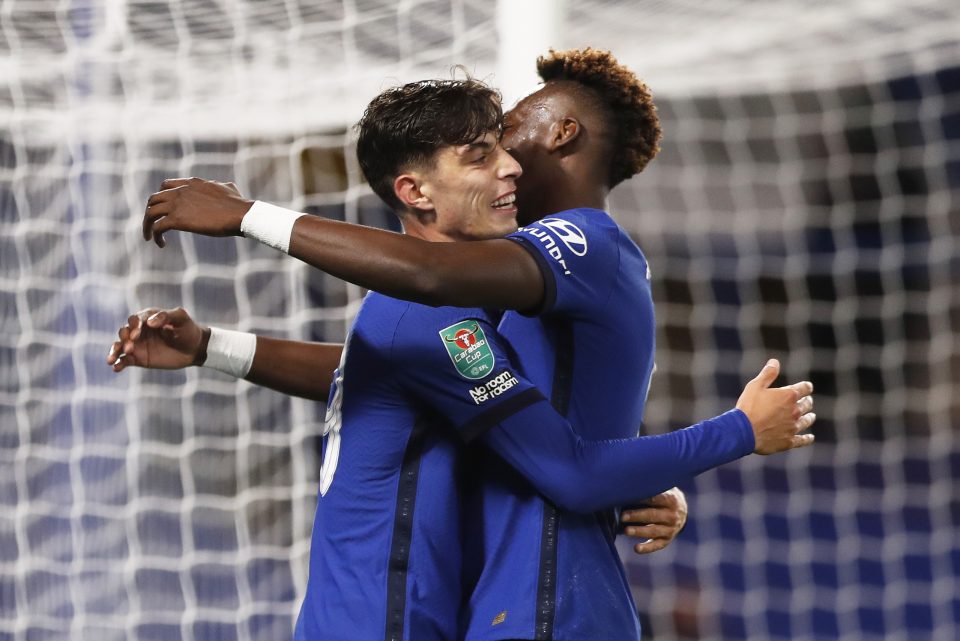 Havertz spearheaded Chelsea’s 6-0 hammering of Barnsley with his first goals for the Blues since joining from Bayer Leverkusen earlier this month.

Joelinton’s brace helped Newcastle to a 7-0 demolition of 10-man Morecambe, who had Toumani Diagouraga sent off after 33 minutes.

Miguel Almiron, Jacob Murphy and Isaac Hayden were also on target – Newcastle scoring five first-half goals in a match for the first time since 1993.

Jamaal Lascelles headed a sixth and a Sam Lavelle own goal completed Morecambe’s anguish to hand Newcastle a fourth-round tie at Newport.

Everton’s impressive start to the season continued with a 5-2 win at League One side Fleetwood.

But Everton, who led 2-0 at half-time, secured a home tie with West Ham as Richarlison (2), Alex Iwobi, Bernard and substitute Moise Kean found the target.

Arsenal set up a potential fourth-round clash with Liverpool by beating Leicester 2-0 at the King Power Stadium.

A Christian Fuchs own goal and a last-gasp Eddie Nketiah tap-in saw the visitors wait on the outcome of Thursday’s tie between Lincoln and Liverpool.

Brighton booked a fourth-round meeting with Manchester United next week by easing past Preston 2-0 at Deepdale.

Second-half goals from Alireza Jahanbakhsh and Alexis Mac Allister were enough for the Seagulls to advance and set up a second home meeting with United in the space of a few days with Ole Gunnar Solskjaer’s side due at the Amex Stadium on Saturday.

Fulham made light of Aleksandar Mitrovic’s absence in a 2-0 win over Sheffield Wednesday at Craven Cottage.

Josh Brownhill’s first Burnley goal since his January move from Bristol City helped the Clarets to a 2-0 win at Millwall.

Brownhill opened the scoring with a 30-yard screamer on the stroke of half-time, and Matej Vydra’s late effort sealed a home tie with Manchester City or Bournemouth at Turf Moor next week.

Stoke saw off Gillingham 1-0 with Tyrese Campbell’s first goal of the new season – a clinical finish after 37 minutes – enough to secure their progress to the last 16.

The case of the ‘blasphemous’ artist