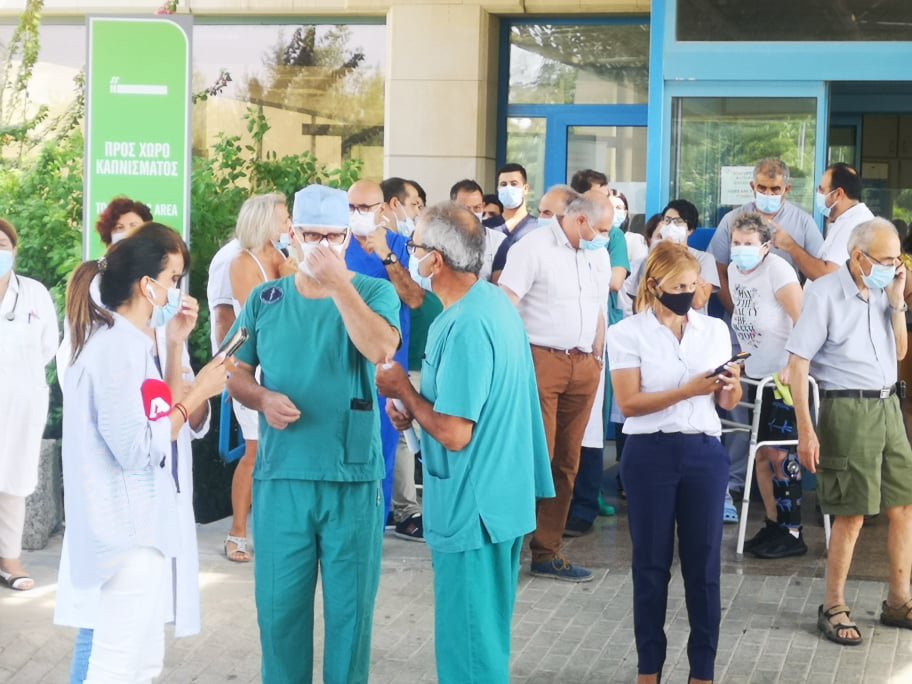 A meeting between the government health services organisation (Okypy) executive director Christis Loizides, the mayor of Paralimni Theodoros Pyrillis and several MPs was held on Friday afternoon at the Famagusta general hospital to discuss the expansion of the facility, which is being used as a reference hospital for Covid-19 cases.

Before the meeting, at around noon, staff at the hospital staged a short protest claiming the recent spike in cases has taken a toll on the staff with doctors and nurses complaining that they are being overworked in recent months. They stopped working for half an hour.

Following the meeting, Loizides said the council of ministers is currently discussing the possibility of expanding the facility by adding an additional floor designated exclusively to coronavirus patients, but that decisions still have not been taken.

“We will have a meeting with the health ministry on October 5, where we will discuss the best possible scenario to adopt in this situation,’ he said.

“There might be a possibility to reserve the third floor to Covid-19 cases, so the rest of the hospital can function normally.

“However, I cannot make promises whether the hospital will remain the only reference facility for coronavirus in Cyprus, that decision is up to the council of ministers.”

On Friday morning, prior to the protest, the scientific director at the hospital Amalia Hadjiyianni said the hospital staff is feeling the effects of months of continuous hard work in the fight against the pandemic.

“We respect the decision of the council of ministers to use our hospital as the reference facility for Covid-19 cases,” Hadjiyianni said.

“But I cannot ignore the cry for help from our doctors and nurses, who have been working tirelessly and without rest for the past weeks.”

“The hospital needs more staff if we want it to continue to operate at a satisfactory and efficient level.”

Hadjiyianni added that many of the people working at the Famagusta general hospital were separated from their families for months during the peak of the pandemic back in spring and that the situation does not seem to have changed.

“We are not getting enough support. The staff at the hospital, doctors, nurses and paramedics, have all reached their limits, she said.

Paralimni mayor Pyrillis said he understands the situation regarding the hospital staff and urged the government and Okypy to allow for more hiring of key roles at the facility.

“Doctors and nurses at the Famagusta hospital worked extra hard in the past months to save lives. They stayed away from their families and they succeeded in keeping the situation in the country under control,” he said.

“We all agree that the hospital needs additional staff and not more doctors leaving the facility to go work in Larnaca, like some MPs shamefully suggested on Thursday during the parliamentary health committee,” he said.

Finally, a spokesperson for the nurses’ body at the hospital, who was also present during the meeting, said that the idea of keeping the hospital as a Covid-19 facility only is not fair to other patients in need of attention in the Famagusta district.

“We have elderly people, children and others belonging to vulnerable categories who cannot get treated anywhere else,” the spokesperson said.

“The Famagusta hospital cannot just treat coronavirus patients, this is unthinkable. Everyone who pays taxes has the right to be treated in his area and not travel to other districts.”

A total of 14 coronavirus patients is currently being treated there.

Out of the 14 patients, one is in the intensive care unit, while the conditions of all other patients are being closely monitored by doctors. Two more people were expected to be admitted at the hospital later on Friday.

At the start of the pandemic, the hospital was treating 28 patients, five of whom were in intensive care. Famagusta hospital has 110 beds plus another 10 in the renal unit.