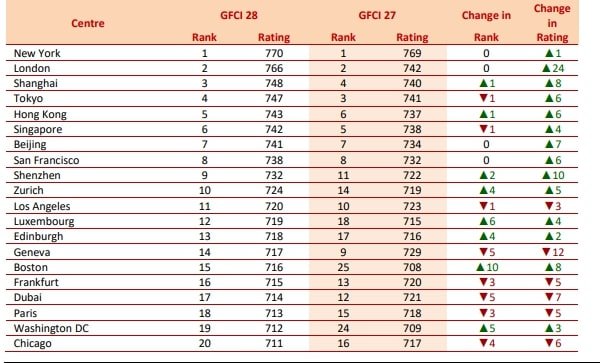 New York retained the top spot in a survey of global financial centres on Friday, with London strengthening its position in second place just over three months before Britain’s full departure from the European Union.

The Global Financial Centres Index (GCFI) is based on a survey by the Z/Yen Group in partnership with the China Development Institute of more than 54,500 assessments collected from 8,549 professionals working in the sector.

“GFCI 28 shows increased confidence in the leading financial centres, but a general reduction in confidence in other centres,” said Michael Mainelli, executive chairman of Z/Yen said in a statement.

Uncertainty about trade, political stability, and the economic impact of the pandemic has injected more volatility into the index results, he said.

“New ways of working are challenging the concept of a traditional financial centre. For example, the physical City of London has had an economically torrid Covid-19, while financial services in Southeast England have had a bumper year.”

While London closed the gap with New York in the latest survey, some respondents said that the impact of Brexit could reduce the attractiveness of the UK capital, hitherto used by global banks as their EU gateway, in the short to medium term.

The City of London loses unfettered access to the EU on Dec. 31 after Brexit transition arrangements end, with future access to EU customers set to be patchy.

For the region of Western Europe, London is still ranked first, ahead of Zurich, Luxembourg, Edinburgh and Geneva.

Cyprus is ranked fifth in Eastern Europe, with Warsaw getting the top rating, followed by Moscow, Istanbul and Prague.