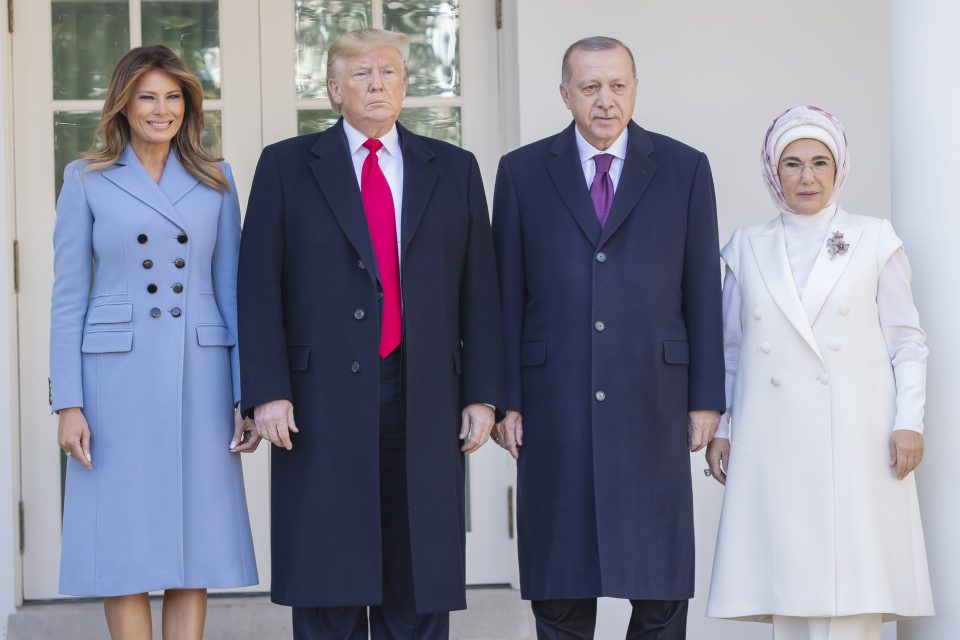 “It’s funny,” Woodward reports the US leader as saying, “the tougher and meaner they are, the better I get along with them.”

Amongst those “tough and mean” world leaders Trump reportedly gets along with is Turkish President Recep Tayyip Erdogan – “even though you’re not supposed to,” Woodward quotes Trump as adding.

Erdogan, too, clearly sees a ‘special relationship’ between himself and the US leader, often speaking directly with him on key international matters.

Yet, at the same time, wider US-Turkish relations have been far from smooth in recent years, despite the presidential ‘bromance’.

The detention and 2018 release of Pastor Brunson and the continued US residence of Fetullah Gulen, whom Ankara accuses of being behind the failed 2016 coup d’etat in Turkey, have been just two bones of contention.

In addition, the US investigation into alleged Iranian sanctions-busting by Turkey’s Halkbank, Ankara’s purchasing of Russian S-400s and ejection from NATO’s F-35 fighter aircraft programme – plus tension over Syria – have all been additional stresses for the ‘special relationship’ between Trump and Erdogan.

Yet, “Just like in a family fight,” Erdem Aydin, Director of London-based political risk consultancy RDM Advisory and a former journalist for CNN Turk, told Cyprus Mail, “they can get very angry with each other, but then make up quickly, too.”

This has enabled them to both escalate and de-escalate crises swiftly, using a range of personal similarities – and dislike of the previous US president and his policies – to navigate
the complex world of international politics.

Yet, this also brings with it a risky volatility – with consequences for this region in particular, as Trump’s US seeks to disengage, while Erdogan’s Turkey looks for a much more powerful role.

Bumpy Road
That Trump and Erdogan ‘get along’ is likely based on a number of factors.

First, although Trump comes from a wealthy background and Erdogan from a working class one, both share a history of being outside their country’s ‘elite’ political and cultural establishment – a group both wish to remove from power.

“Trump is a disrupter of the US political system and sees a similar leader in Erdogan,” Ozgur Unluhisarcikli, Ankara Office Director with the German Marshall Fund, told Cyprus Mail. “Trump sees Erdogan as someone who has successfully disrupted and dismantled the old political system in his country. He’s someone Trump would therefore very much like to be.”

In addition, “As they have both been out of the system for so long,” says Aydin, “they are both highly reliant on family and close confidants, which makes for another bond.”

Both men also have a strong dislike for collegiate, institutionalised decision-making.

“They both detest their country’s bureaucracies and the limitations this places on them,” says Aydin. “In Turkey, there is now a presidential system based on the US model, but without the checks and balances. If Trump could have a political system, it would be like Erdogan’s.”

Love and Hate
At the same time, Trump’s dislike of his predecessor, President Barack Obama, has also been a strong influence on his policy decisions – with Erdogan one of the main beneficiaries.

“Trump loves to scapegoat Obama,” says Unluhisarcikli, “so his foreign policy has basically been an anti-Obama policy.”

The clearest example of this is Syria, where Obama deployed US troops to support the Kurdish Syrian Democratic Forces (SDF) against Islamic State.

Turkey sees the SDF’s main component, the People’s Protection Units (YPG), as part of the Kurdish Workers Party (PKK), the separatist group it has been fighting against for decades in south-eastern Turkey.

Erdogan has thus long lobbied Washington to remove its support. In this, Trump has proved obliging.

After a phone call with Erdogan in October 2019, Trump ordered US troops out of Syria, abandoning the SDF and effectively ‘green lighting’ a Turkish invasion of SDF areas.

At the same time, “The decision to allow Turkey to drive deeper into Syria stemmed from Trump’s instincts and impulses to withdraw from the region,” Jonathan Schanzer, Senior Vice President of the Foundation for the Defence of Democracies think-tank in Washington DC, told Cyprus Mail. “Trump was looking for a reason to cede ownership of the fight against Islamic State and get out of Syria – and Erdogan provided him with that.”

Another example of Trump as the anti-Obama president has been the case of the Turkish state bank, Halkbank.

During Obama’s second term, this became entangled in a series of US court cases, in which it was alleged to have taken part in a complex Iranian sanctions-busting scheme.

The case had also seen allegations made against leading members of Erdogan’s entourage, including his son-in-law and now Turkish finance minister, Berat Albayrak.

Erdogan has therefore long lobbied the US to drop the case – and under Trump, the US administration has appeared to support this lobbying.

The recent book by former-US National Security Advisor John Bolton, The Room Where it Happened, quotes Trump as telling Erdogan he would “take care of things” and replace “Obama’s people” in the court system with his own.

“Trump wanted to show Erdogan he could be as arbitrary as him,” Aydin says.

Protect the Family
Yet, the Trump-Erdogan relationship has not always been smooth.

In late 2016, a US pastor, Andrew Brunson, was arrested in Izmir by Turkish police, accused of being involved in the failed coup d’etat of that year.

US evangelical Christians – one of President Trump’s main domestic support bases – were outraged and demanded action.

“With this, we saw how harsh Trump could be in defending his own people,” says Unluhisarcikli.
Trump’s response eventually escalated into a full blown attack on the Turkish economy, sparking the 2018 Turkish currency crisis.

“Traditionally,” says Schanzer, “there has been a concerted effort by both Democrat and Republican administrations to maintain good relations with Turkey – almost at whatever the cost. The Brunson episode absolutely disrupted those efforts.”

Brunson was eventually released, despite being found guilty, winning praise for Trump from some of his core supporters.

“Trump knows what his electorate wants, just like Erdogan does,” says Aydin.

Shifting Alliances
The Trump-Erdogan relationship also comes at a time when old certainties – and alliances – have been shifting dramatically.

“The core problem is that the strategic framework of US-Turkish relations is now outdated,” Unluhisarcikli says.

That framework was based on the Cold War alliance, in which NATO member Turkey was a key US ally against the Soviets.

Yet, as Turkey’s recent purchase of Russian S-400 anti-aircraft missiles – and consequent expulsion from the NATO F-35 fighter jet programme – demonstrates, “we live in a different world now,” says Unluhisarcikli.

With US elections coming up fast, how either a second-term Trump presidency, or a first-term Joe Biden one, handles this fundamental shift will be key to a whole range of regional issues.

Meanwhile, “I don’t think there’s much doubt about who Erdogan hopes will win in November,” says Aydin.