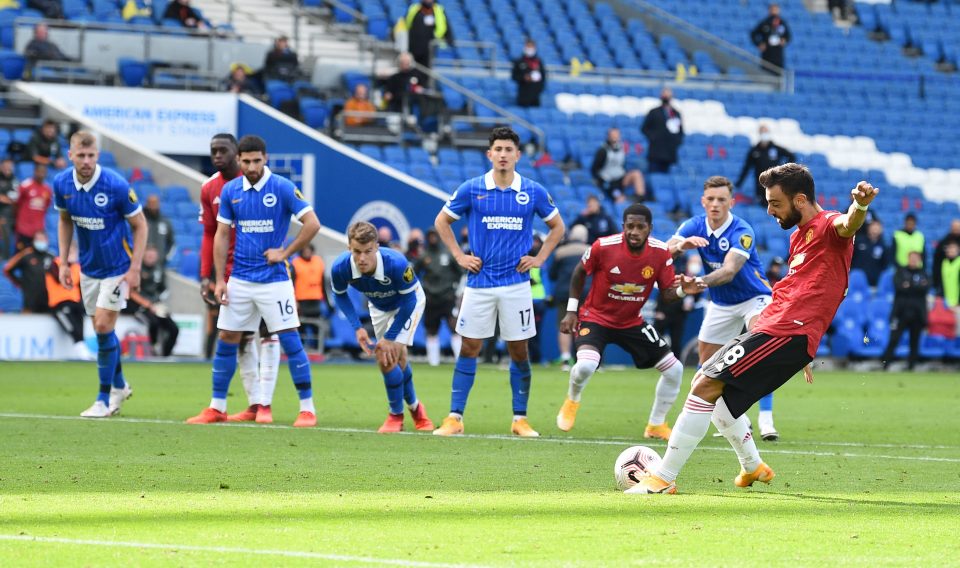 Manchester United snatched a remarkable 3-2 win at Brighton with a penalty from Bruno Fernandes deep into stoppage time to settle an incident-packed encounter.

The Seagulls hit the woodwork three times – twice from Leandro Trossard – inside the opening half an hour, before United forward Mason Greenwood had a goal ruled out for offside.

On 40 minutes, Neal Maupay gave the home side the lead from the penalty spot after Fernandes had fouled Tariq Lamptey.

United, though, were level just 194 seconds later when Brighton captain Lewis Dunk knocked the ball into his own net following a free-kick.

Brighton thought they had been given another spot-kick early in the second half when Paul Pogba appeared to trip Aaron Connolly – but referee Chris Kavanagh reversed his decision after watching the incident on the pitchside monitor.

Marcus Rashford then saw a goal ruled out for offside following a VAR review.

The England striker, though, was soon on the scoresheet when he then collected the ball on the left, powered into the penalty are and danced around the Brighton defenders to fire United in front on 55 minutes.

Brighton were denied twice more by efforts hitting the woodwork before Solly March finally nodded in an equaliser during the fifth minute of added time.

There was, however, more late drama to come after Harry Maguire headed against the outstretched arm of Maupay.

Players from both teams surrounded match official Kavanagh, who had initially blown for full-time only for VAR to indicate a penalty.

Portugal international Fernandes kept his cool to lash the spot-kick into the top-right corner and hand United a first Premier League win of the new campaign.

Chelsea fought back from 3-0 down at half-time to draw 3-3 at West Brom with a stoppage-time equaliser from Tammy Abraham.

The Baggies, looking for a first point since promotion back to the Premier League, were in front after just four minutes.

Marcos Alonso lost the ball to Matheus Pereira and he found Callum Robinson, who drilled in to the bottom corner past Willy Caballero with number one Kepa Arrizabalaga dropped to the bench.

Timo Werner clipped the crossbar, but it was soon 2-0 following another defensive mistake by the Blues.

Thiago Silva, who had been named captain, let the ball go under his boot and Robinson ran clear to produce another smart finish in the 25th minute.

West Brom found themselves 3-0 up just a couple of minutes later when Kyle Bartley converted from close range after a corner.

Chelsea started an unlikely comeback five minutes after the restart when Mason Mount drilled into the bottom corner from 25 yards.

Callum Hudson-Odoi, one of two second-half substitutes, played a neat one-two with Kai Havertz to sweep home a second with 20 minutes left.

Chelsea’s continued pressure finally told when Abraham knocked the ball in from two yards after goalkeeper Sam Johnstone palmed out a low shot from Werner.

In Saturday’s only 3pm kick-off, Everton won 2-1 at Crystal Palace to maintain their perfect start to the Premier League campaign and move top of the table.

Carlo Ancelotti’s men – who followed up their win over Tottenham by thrashing West Brom 5-2 – opened the scoring after 10 minutes.

A slide-rule pass from Colombian James Rodriguez put Seamus Coleman into the right of the Palace penalty area and his cut-back was knocked in by Dominic Calvert-Lewin for the striker’s fifth goal of the new campaign.

VAR again made a crucial intervention four minutes before half-time.

Joel Ward – having earlier seen one handball claim go in his favour – was adjudged to have blocked Lucas Digne’s header with an arm after referee Kevin Friend took another look on the pitchside monitor.

Richarlison fired in from the penalty spot to send the Toffees into the break with a 2-1 lead, which proved enough for all three points following a low-key second half as the Eagles saw their unbeaten start come to an end.

Che Adams set up Danny Ings after five minutes for a strike which proved enough for all three points on a bitterly cold evening at Turf Moor.

Burnley felt they should have equalised on the hour through Chris Wood, but the goal was ruled out for what looked to be a marginal offside against Matej Vydra in the build-up.