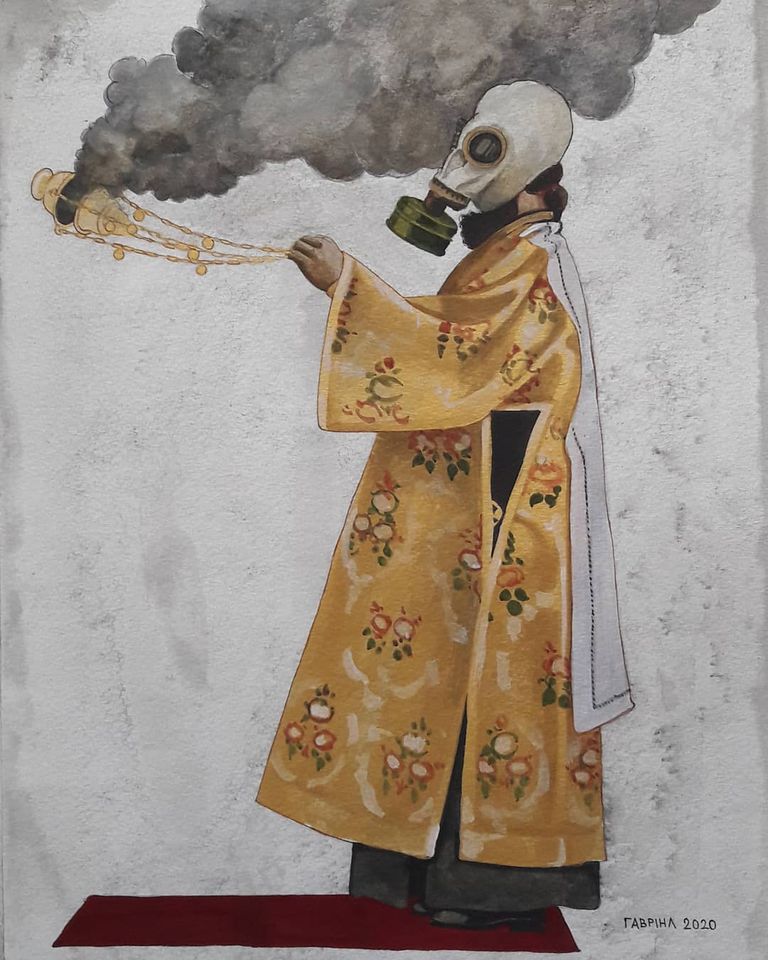 One of the paintings By George Gavriel

ARCHBISHOP Chrysostomos’ demand for the sacking of head-teacher George Gavriel for his ‘sacrilegious’ paintings proves once more that Orthodoxy, in contrast to Protestant-Catholic Christianity, is incompatible with modernity, democracy and the ideals and values of the European Union.

Merely the fact that a disciplinary investigation was ordered on the demand of the archbishop should worry us and keep us awake for two reasons.

First, the persecution of a teacher, or anyone for that matter, who paints pictures that according to the view of a group (in the majority conservative and religious) are offensive to what is held sacred appears to be lawful in Cyprus despite us being in the 21st century.

One would have thought that the spirit prevailing in the European Union would have rendered the letter of the law, as defined in the Cyprus constitution a dead letter, but unfortunately this did not happen. As mentioned in the announcement by Tepak university’s Fine Arts School “restrictions to the freedom of expression could emanate from the fact that Cyprus is one of the few European countries that still maintains – unfortunately – an article in its criminal code that criminalises blasphemy.”

It is encouraging, though, that the academic world stood up and offered full support to the persecuted teacher, as the announcements of the state universities made evident.

Second, the archbishop is acting like an uber-minister of education and the impression created is that every minister is just a watchman for the head of the church at the ministry. This was why Prodromos Prodromou hastily ordered a procedure for a disciplinary investigation, which could be the prelude for sacking the teacher and perhaps – who knows – also his excommunication.

The separation of church and state and the creation of secular states in Europe led to the abolition of laws on blasphemy in EU countries, except Cyprus. This is why the church is so dominant and often behaves like a state within a state. And this time we have a tangible example – the archbishop issues a missive and the education minister promptly executes it.

The reasons blasphemy and defamation of religion laws were scrapped in the EU was because they negatively affected freedom of expression and their existence created problems that sociologists described as ‘chilling effects’. In other words, the existence of such laws creates the fear that what someone expresses could be interpreted as blasphemy and this fear limits the power to criticise while also promoting censorship.

The Venice Commission, an advisory body of the Council of Europe, in 2010 closely examined EU legislation relating to blasphemy and concluded that the offence of blasphemy must be abolished in all EU countries and never be re-introduced. It also stressed that what should be prosecuted was the incitement to hatred, including religious hatred. Most importantly, as it relates to what is happening in Cyprus, there was no need for enacting legislation on causing religious offence (that is insulting religious feelings) without incitement to hatred constituting a basic component. (See Venice Commission, Blasphemy, insult and hatred: No.47, 2010)

The issue that has surfaced with the teacher-artist is not unprecedented. The history of Orthodoxy is littered with confrontations with some of the most prominent individuals of Greece. Among those excommunicated were the leader of the Greek Revolution, Alexandros Ipsilantis; the greatest Greek politician of all time, Eleftherios Venizelos, and the greatest Greek writer of modern times, Nikos Kazantzakis (even though his excommunication was not accepted by the Ecumenical Patriarch Athinagoras). I could add other prominent Greeks that suffered a similar fate such as Theodoros Kolokotronis, Emmanuel Roidis, Andreas Laskaratis, Theodoros Angelopoulos. …

What is astonishing are the curses that accompany many excommunications. For example, when the Holy Synod excommunicated Venizelos it cursed him thus: “regarding this traitor Venizelos we read an excommunication for him to be afflicted with the rashes of Job. The leprosy of Jehovah. The withering of the dead. The trembling of the mentally infirm. The thunderbolts of hell. The curses and anathema of people. We will read the same verses against those who in the coming elections want to give a blank vote to the WORTHLESS TRAITOR Venizelos…” The curse was also of course a warning to voters not to vote for Venizelos because they too would be cursed.

In Cyprus we have quite a few examples. One of our best poets, Tefkros Anthias, was excommunicated by the Church of Cyprus for his poetic collection, ‘Second Coming,’ through the verses of which the workers sat in judgement of God. In 2015, Andreas Pitsillides, an enthusiastic and charismatic theologian with modern views, was excommunicated because he backed homosexuals and abortions before the third month of pregnancy. Unfortunately, his colleagues kept quiet instead of supporting him.

It is a depressing thought that the Church of Cyprus banishes from its ranks a sensible, open-minded reformer determined to eliminate the suffering of the victims of prejudice, while at the same time tolerates the backward and idiotic sermons of some of its bishops.