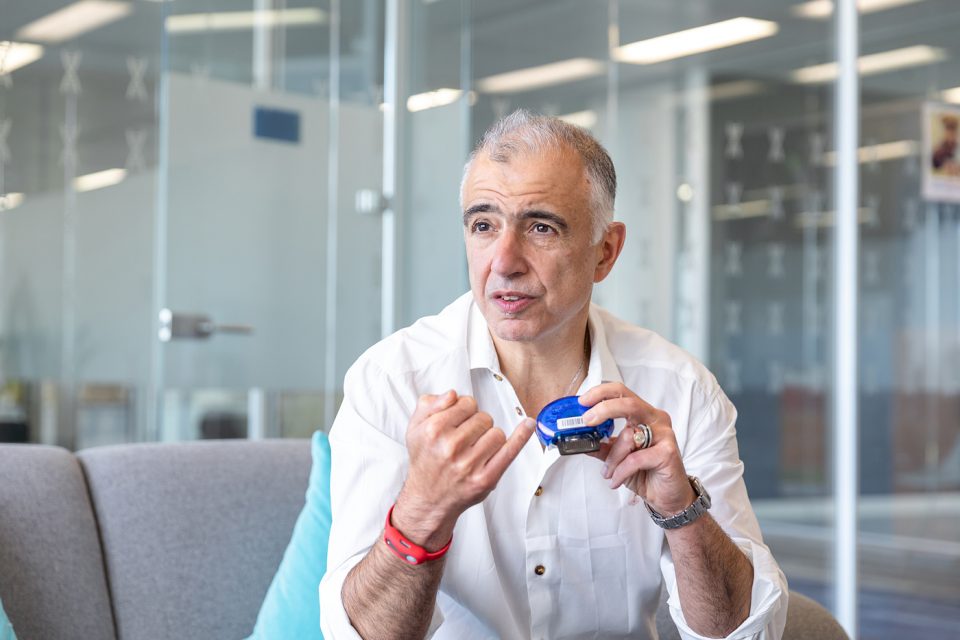 The Work Of Chris Toumazou, Pictured With The Dna Kit, Was Inspired By The Medical Condition Of His Son (Thomas Angus)

A breakthrough in the battle against Covid-19 has been achieved by a British Cypriot tech entrepreneur and professor, who has pioneered a much-heralded lab-free test that delivers accurate results within 90 minutes.

The brainchild of Chris Toumazou, of Imperial College London, the testing kit has been dubbed “a lab in a cartridge” and the British government has ordered 5.8 million of them from his start-up company, DnaNudge.

Toumazou, the company’s co-founder and CEO, spent the height of the pandemic – back in March, April and May – driving up and down the British motorways, evaluating his testing kit in various hospitals.

“The beauty of the test we’ve got is that it’s real medical grade quality,” Toumazou told the Cyprus Mail.

“We initially tried 10,000 tests within London hospitals, we got a CE mark which is a medical approval. It was really quite emotional,” he said.

Toumazou, an award-winning inventor and innovator, already has over 80 granted patents in the field of consumer healthcare and microchip technology.

And if that doesn’t impress you, he was the youngest professor to ever be appointed to Imperial College, aged 33.

But his path to professorship was far from certain. As a child, he always expected to go into the famed Greek Cypriot catering business – his father ran a taverna, which Toumazou himself worked in after school.

“I come from a typical Cypriot background – you know – family left Cyprus, lived in the north (Yialousa), came to the UK and my family went into the catering business,” he recalls.

His aunt married an Englishman, who happened to be an engineer, and this opened up a new world of possibilities.

Asked what inspired him to get into the field of biomedical engineering, specifically for preventative testing, Toumazou said it was partly due to the health complications faced by his son.

“Marcus, lost his kidney when he was very, very young to a renal genetic disease and I couldn’t have prevented it from happening but I could have managed his lifestyle differently if I knew that he had the genes for this condition,” he said.

“And then that got me very much interested in prevention and early detection rather than necessarily a cure.”

Fast-forward to the novel coronavirus test itself, a study published by The Lancet found that the DnaNudge test has an average sensitivity which means being able to correctly identify Covid-19 cases of 94.4 per cent and its specificity – correctly identifying those without it – of 100 per cent.

“These results suggest that the CovidNudge test, which can be performed at a patient’s bedside without the need to handle any sample material, has comparable accuracy to standard laboratory testing,” professor Graham Cooke, lead author of the study from the Department of Infectious Disease at Imperial College London, said in the Lancet recently.

But why is this coronavirus test so important and don’t we already have reasonably accurate tests?

The key here is speed, while not sacrificing accuracy, which aims to liberate many from the standard 48-hour wait for results.

The implications cannot be overstated and Toumazou outlined just a few of the key beneficiaries: those awaiting urgent surgery, airports, maternity wards and even those who are sometimes forgotten such as mental health patients.

But the question on many people’s lips will inevitably be: why was Toumazou and his start-up able to create this Covid-19 test kit and not somebody else?

Essentially, Toumazou had most of the tools ready and slightly tweaked them.

His Covid-19 test was adapted from a previous iteration of his testing kit, DnaNudge’s consumer test, which launched last year. It analyses a user’s genetic profile to display their biological map and identifies traits such as obesity, hypertension and cholesterol.

It then aids users by “nudging” them towards lifestyle choices which aim to minimise potential risks.

He explained that it works like a traffic like system, whereby a person downloads the app or uses a wearable and scans food items in supermarkets. According to your profile, goods then come up as either red or green.

“But you know, the best diet is the one you don’t know that you’re having, the whole point was to demystify the whole process so that people are closer to the science,” he said.

“If you know that your own biology is saying ‘that’s green for you and not red for you’ then it’s a biological traffic light system and not a marketing one, you know you’re not being conned into a one suits all.”

But how did he recalibrate this system?

“We repurposed the test and most of the technology had already been developed, it was a matter of just changing the chemistry on the chip to detect Covid-19,” Toumazou said.

“So, we then just repurposed it so that [it functions] almost like a fishing bait, and if you got it, it bites. Very binary, you’ve either got the genes of Covid-19 or you don’t,” he said.

Toumazou previously worked with Public Health England as the chief medical officer on the epidemic of obesity in the UK.

As he explained: “They knew about my work for a simple consumer test, the utility of our test was borne from the consumer world, so when Covid-19 came along, it seemed almost like a marriage in heaven to repurpose it for Covid-19.”

Toumazou’s innovation might not be a silver bullet in itself. Many hope that will come in the form of a vaccine at some point in 2021. But the 90-minute test kits offer both greater freedom and security in our uncertain world.

The road to economic recovery and resilience