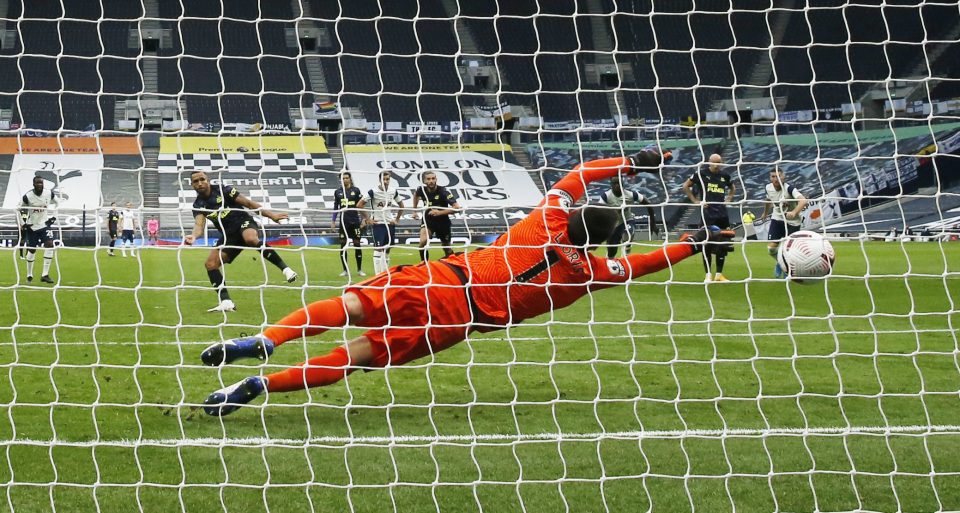 Another controversial handball decision gave Newcastle United a stoppage-time equaliser by Callum Wilson from the penalty spot and a 1-1 draw at Tottenham Hotspur in the Premier League on Sunday.

Spurs had led through a 25th-minute Lucas Moura goal and Newcastle had not managed a shot on target but deep into stoppage time Newcastle’s Andy Carroll and Eric Dier challenged for a ball and the forward’s header brushed the arm of the Spurs defender.

A VAR review led referee Peter Bankes to look at the incident, in which Dier had his back to the ball as he jumped with Carroll, and point to the spot.

Wilson’s spot-kick squeezed past Hugo Lloris and earned Steve Bruce’s side a point that had looked unlikely for most of the match.

Jose Mourinho’s side started brightly and Newcastle keeper Karl Darlow had to produce a superb double save to keep out a Giovani Lo Celso free kick and Harry Kane’s follow-up.

Darlow also did well to save a Kane header but Spurs broke through in the 25th minute — Son Heung-min fed Kane on the left and his low ball across the face of goal was turned in by Moura at the far post.

Son fired a left-foot shot against the post before striking the woodwork again with a drive against the bar three minutes before the interval.

Mourinho took Son off at the break, perhaps taking into account the team’s busy schedule with midweek League Cup and Europa League matches on the horizon, but without the South Korean there was a more pedestrian look to Tottenham.

Still, Mourinho’s side appeared to have done enough until the latest handball drama which caused the Portuguese manager to storm down the tunnel.

Jack Harrison whipped in a superb cross from the left wing and Bamford rose well to score for the third straight game and leave Chris Wilder’s side without a point or a goal this season.

The game had been a story of excellent goalkeeping at both ends.

Leeds‘s French keeper Illan Meslier produced a superb save in the 29th minute from a close-range effort by John Lundstram after good work from Ben Osborn down the left.

Marcelo Bielsa’s side threatened before the break, though, and United keeper Aaron Ramsdale did well to keep out a lofted shot from Stuart Dallas.

Meslier was alert again after the break when George Baldock turned sharply on the edge of the box to lose his marker and unleash a powerful drive but the 20-year-old keeper parried well.

Helder Costa then threatened with a stinging volley that was kept out by the diving Ramsdale.

Bamford’s fine header, however, ensured that Leeds move to six points from their first three games on their return to the top flight after a 16-year absence.

“It was a just result,” Bielsa said. “The first half was even. We could’ve scored but also conceded. The second half was a lot better for us. I think we created a small but just difference to create the victory.”

Sheffield United had lost to Aston Villa and Wolves before the Leeds game and manager Chris Wilder said it had been a tough month.

“We’ll be glad to see the back of September, Fresh start in October at Arsenal away. I can’t fault a lot of things the players did in the game. I thought it was really tight, you have got to take the chances in the Premier League.

“We have to be more clinical, the best chances fell to us, we know how Leeds play, high energy and high tempo. We ultimately got punished by a fantastic ball and a great header,” Wilder said.