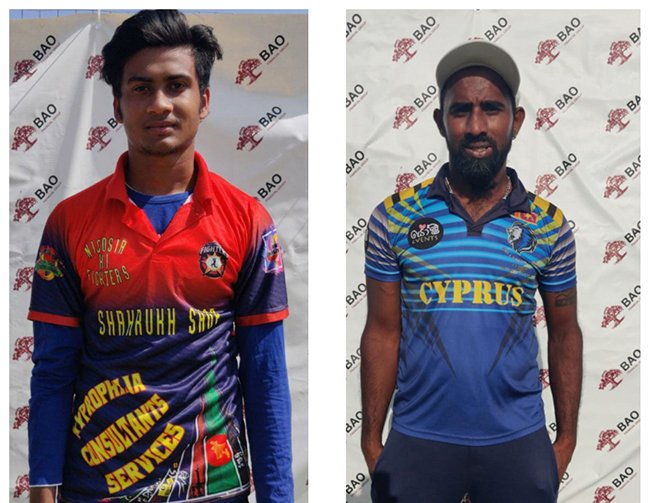 In the first match Nicosia Fighters and Limassol Gladiators were both looking for their first win, but this did not stop the batsmen on both sides playing in aggressive style.

Murtaza Khan (24) and Abbas (36) counter attacked for Gladiators as they reached 44 in the 5th over for 1 wicket. The experienced Faheem Rehan (81) then combined with Abbas to chase down the target but they were unable to keep up with the asking rate as the innings finished on 196-8 in 20 overs. The 39 extras conceded by Gladiators proved to be the difference as the winning margin was 38 runs.

Abdullah Al Tasmin was man of the match for his half century and 1 wicket.

The second game was one to forget for Amdocs, who – along with Gladiators – finished the competition without a win, as they suffered the wrath of the Limassol Sri Lanka Lions batsmen, who plundered 267-3 in 20 overs.

BLCS Kumara (115) and Sadun (61) starred in a second wicket stand and laid the platform for their captain Nalin (30*) and Asanka (14*) to add brief cameos as the Lions prepared themselves for their semi-final game.

Swaroop (50) with an aggressive half century led Amdocs reply and received good support from Chaitas Shah (12), Akash (32), and Shailender (30) but the target proved beyond their reach as they finished their innings on 165-6 in 20 overs.

Tharanga was the pick of the bowlers with 3 wickets, while BLCS Kumara was the man of the match for his century.

The semi-finals at Ypsonas this Sunday promise to be two fascinating matches between in-form teams. Moufflons will need to be wary of Punjab Lions’ powerful top-order batting, while Sri Lanka Lions will have to find a way to stop the Riyaan run-machine Rehman. The winners will meet in the final the following week. 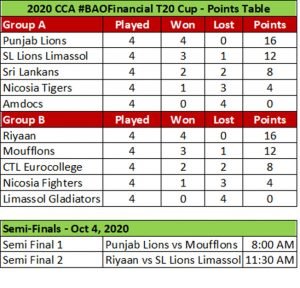