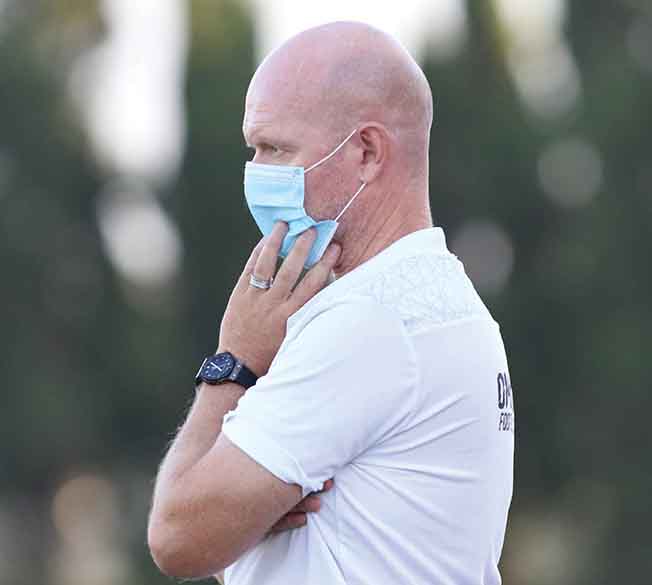 On the eve of the most important game in their recent history, the return leg of the Champions League qualifier against Greek side Olympiacos, Omonia Nicosia players have more than football on their minds.

On Sunday, a second Omonia player tested positive to Covid-19, days after news a teammate had contracted the virus following the team’s return from Greece last Wednesday.

Having to overturn a 2-0 defeat against a much stronger and more experienced team is hard enough without having other distractions on their mind, a source close to the club told Cyprus Mail.

“It’s difficult for players to focus on the game at the moment,” he said.

“They all have families, they all have their own lives away from the pitch and we at the club understand that.

“They are not robots and the most important thing for them and for us as well is to protect their health, regardless of how important the game is tomorrow.”

The source said the club is following the health protocol set by the health ministry and approved by the Cyprus Football Association (CFA) outlining the measures in place regarding possible cases of coronavirus within football clubs.

“We are strictly adhering to it, but we cannot deny we are worried. Unfortunately, there is always a possibility there will be more cases,” he said.

“Regardless, tomorrow remains a huge game for us and the first leg showed that we are strong enough to compete with a club as good as Olympiacos. We will have to score soon in the match and, if we do, we will be in with a chance.”

Elsewhere, following the announcement on Sunday that a footballer who plays for the second division club Asil Lysis was found positive to coronavirus, the match between his team and Omonia Aradippou, scheduled to take place on Monday at 4.30pm, was postponed.

Last Thursday, Omonia Aradippou’s youth team’s goalkeeping coach was also found to be positive. He is part of a cluster of cases announced last Wednesday linked to Ethinkos Achnas.

The Asil Lysis player was found positive as part of a programme of 3,000 tests being carried out for Larnaca district residents following a spike in the number of cases in the town and district.

The Ethinkos Achnas cluster increased last Saturday after two players, one of who presented Covid-19 symptoms, and a team official were found positive, bringing the current total cluster to 27 cases.

The Nea Salamina cluster presently stands at 24 cases, including 20 players and staff members.

After a meeting between the health ministry and the football association (CFA) last Friday, officials decided to start carrying out regular checks at clubs’ facilities to ensure teams were following the protocol in place for football correctly.

It was decided that 7,000 football players across all divisions apart from division one, will be tested for the coronavirus.

The current protocol will remain the same, but clubs were urged to be stricter in its application.

Health officials have also clarified and simplified the protocol with members of the government’s epidemiological team, in order to facilitate its implementation by the CFA.

Every team in Cyprus now must appoint one member of their staff who will be responsible and accountable for the proper implementation of the protocol and who will be trained by health experts under the CFA’s supervision.

During last Friday’s meeting it was also decided that all changing rooms that do not adhere to health and safety rules will be closed. This especially applies to lower league teams.

Lightworker physical appearance | Do you have all 3 Lightworker traits? – George Lizos