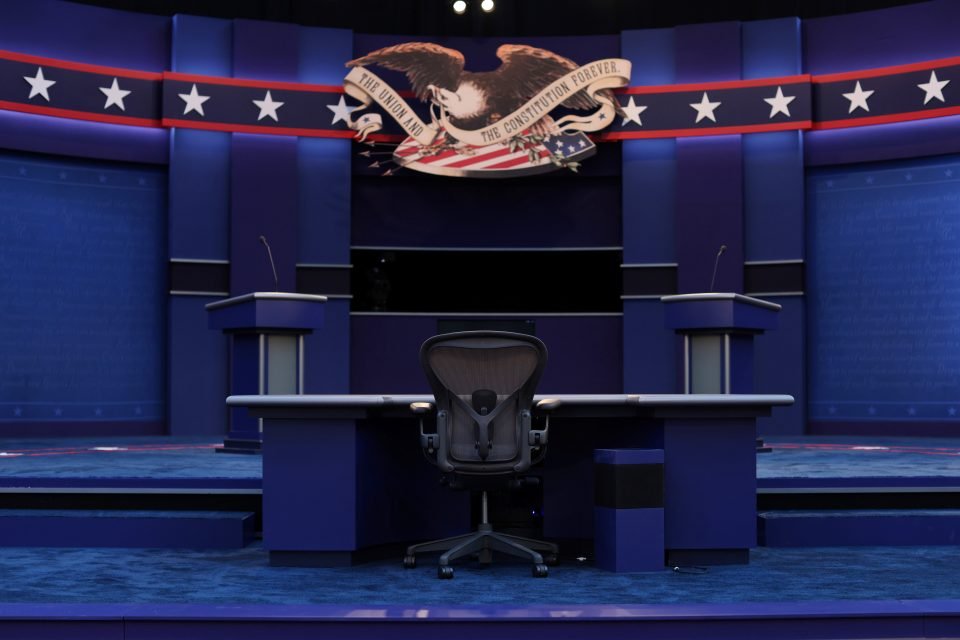 The stage awaits the first presidential debate between US President Donald Trump and Democratic US presidential nominee and former Vice President Joe Biden on the campus of the Cleveland Clinic in Cleveland, Ohio

President Donald Trump and former Vice President Joe Biden square off on Tuesday in their first presidential debate. With five weeks to go until the Nov. 3 general election, the stakes are high.

Here are five things to watch for during the 90-minute televised debate in Cleveland:

The report, which Trump called “total fake news,” gives Biden a fresh opening to make his case that his working-class roots better position him to understand the economic struggles of everyday Americans than the billionaire occupying the White House.

Trump also faced persistent questions, based on his statements about a rigged election, about whether he will accept the voting results should he lose. With millions at home watching, how will he respond if Biden pushes him to commit to a peaceful transfer of power?

Both candidates will scuffle over Trump’s nomination of Amy Coney Barrett to the U.S. Supreme Court. Trump is using his pick to rally his conservative voter base and distract from his record on the coronavirus and other matters, while Biden is warning of threats to health care and abortion rights.

For Biden, the debate will serve as sort of a reintroduction. While he has held limited events in some states and given media interviews, the coronavirus pandemic has largely rendered him off stage for months.

That has allowed Biden to keep the focus where he wants it: on Trump and his performance in office. But on Tuesday, the Democratic nominee will have to make his own case for the presidency, while giving concise answers and avoiding some of the verbal mishaps that have plagued him throughout his political career.

With Biden leading in polls, a strong outing could place Trump in even worse shape. A weak one could reshape the race.

Faced with alarming coronavirus statistics or unrest in the streets, Trump is quick to blame Democratic officials, activists, scientists – anybody but him. One of Biden’s goals will be making sure the public understands that Trump is the one in charge.

Trump could use his office to his advantage, as he often tries to do with the economy. Voters like to see a president take responsibility – for the good and the bad.

John Geer, an expert on voter opinion at Vanderbilt University, wonders if Trump will react poorly to sharp or unfriendly queries from moderator Chris Wallace of Fox News. “Will Trump have a tough time answering non-softball questions?” Geer said.

DOWN IN THE MUD

Biden has worried aloud about reacting to Trump’s propensity for ad hominem attacks. On the campaign trail, the former vice president has sometimes shown flashes of temper, getting his “Irish up” as he calls it.

Trump in a tweet on Sunday went as far as to suggest Biden will be on performance-enhancing drugs during the debate, signaling that perhaps there is little he will not do or say to rattle Biden and disrupt the proceedings.

Polls show that Trump’s frequent questioning of the 77-year-old Biden‘s mental fitness has registered with some voters. Trump’s team will be looking for moments where Biden seems flustered or unsure to exploit as viral video.