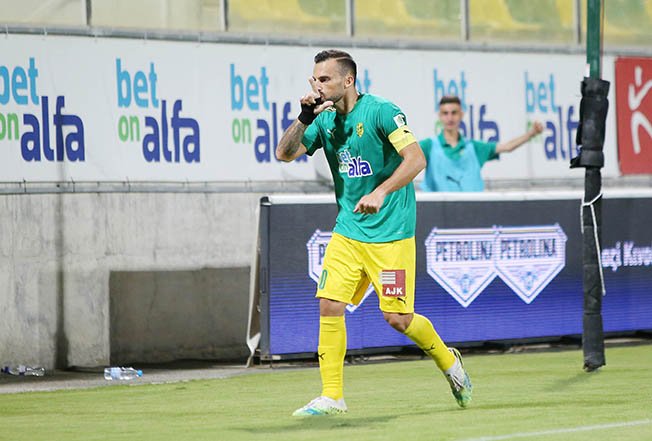 With his goal during AEK's 2-1 win over AEL, forward Ivan Trichkovski reached a century of goals for the Larnaca club

The fifth round of the Cyprus first division would have come to a close on Monday night, with a game between Olympiakos Nicosia and Pafos FC capping off the weekend matches before it.

Although Olympiakos beat Pafos FC 2-1 on Monday night, unfortunately, due to an alarmingly high number of positive coronavirus cases among top-flight football players, especially at clubs Nea Salamina and Ethnikos Achnas, four out of a total of seven fifth round games were postponed, with further rescheduling seeming like an unavoidable necessity.

On Friday night, Karmiotissa Polemidion recorded their first win of the season, defeating fellow relegation contender Enosis Neon Paralimniou with a final score of 2-1. This was the fifth consecutive loss for Enosis, while Karmiotissa’s win followed two draws and two defeats.

Enosis’ newly-appointed manager Carlos Alós Ferrer expressed disappointment at the outcome. “We nearly controlled the entire game, but we conceded two goals in the last 15 minutes, one of them being from a set-piece”, Ferrer said.

“We have to work hard. We are in a bad state mentally. We have to become more confident. We were close but lost on the details. Details matter in football”, Ferrer added.

With his goal during the weekend, forward Ivan Trichkovski reached a century of goals for the Larnaca club. “Although this honours me, I don’t care about individual wins, but collective ones”, said Trichkovski after the game.

“AEL are a club who have my endless respect, they work hard and give it all on the pitch. We have a new manager and it was important for us to win”, he added.

New AEK Larnaca manager Joan Carrillo was positive after the game, without failing to mention that his club can further improve in the future. “We are a team at a sound technical level”, he said, before adding that “we have much room for improvement”.

“I am happy with the win and I dedicate it to the fans who were not able to attend the game”, Carrillo concluded.

You can watch the full highlights between AEK Larnaca and AEL Limassol below.