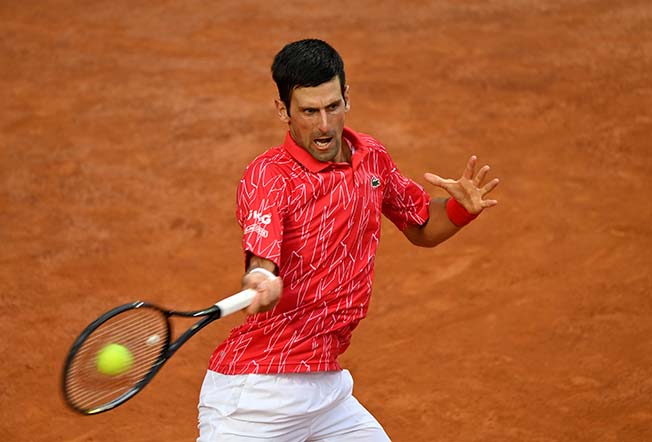 Three weeks after an acrimonious exit at the U.S. Open, world number one Novak Djokovic will resume his pursuit of an 18th Grand Slam title when he takes on Sweden’s Mikael Ymer in the first round at the French Open on Tuesday.

The Serbian had started as a heavy favourite to win the title at Flushing Meadows but was disqualified from his fourth-round match against Pablo Carreno Busta after inadvertently striking a line judge in the throat with a ball.

“I had to accept it and move on. Of course, it was a shock for me and a lot of people,” Djokovic told reporters.

The incident raised question marks over Djokovic’s volatile on-court behaviour in an otherwise perfect 2020 season, in which he has assembled a tour-leading 31-1 record.

Djokovic was relieved to turn a page on the New York chapter and looked right at home on his claycourt return in Rome, dropping just one set en route to his fifth Italian Open title.

“I don’t want to sound arrogant. I am very satisfied and pleased to win a title. I know I still have a couple of gears,” said Djokovic after sealing his record 36th Masters trophy.

Six-times Grand Slam champion John McEnroe said Djokovic had shown strength of character to respond so positively to his New York debacle and believes the 33-year-old has fixed his mind on surpassing the Grand Slam records of Rafael Nadal and Roger Federer.

“I think he’s very thoughtful, he comes out and says that he wants to make history and be the best of the best, which is putting even more expectation on yourself but he’s embraced that,” Eurosport analyst McEnroe said.

“He’s been able to break himself into the two all-time greatest players and be part of that mix where you decide maybe Novak will be the greatest.”

Ymer, ranked 80, will be facing a world number one for the first time when he walks out to play Djokovic and will take some heart from that fact that the Serbian lost to a lower-ranked player in a Grand Slam when he fell to number 117 Denis Istomin in the second round of the 2017 Australian Open.

It would represent a huge shock though as the damp claycourts, featuring a lower bounce than during the tournament’s usual May/June slot, appear tailor-made for the precision baseline power and accuracy that Djokovic boasts.

Order of play on the main showcourts on the third day of the French Open on Tuesday (play begins at 0900 GMT, prefix number denotes seeding):

Frederick Research Centre announces the launch of the DEFEAT project

Aguero ruled out for up to a month, says City boss Guardiola