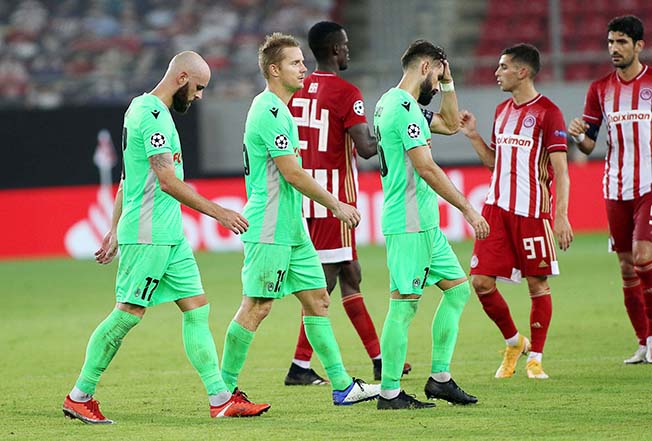 Omonia host Olympiacos Piraeus in the second leg of their Champions League playoff tie on Tuesday night in Nicosia (10pm), needing to overturn a 2-0 deficit if they are to reach the group stage of the competition.

To make matters worse, the Greens have to contend with two players becoming unavailable after they tested positive for Covid-19 following a round of tests after the club’s return to Cyprus from Greece after last week’s first leg.

It has been reported that the second incident has prompted authorities, including Uefas’s own health committee, to request that the entire squad be subjected to new tests on Monday, to make sure that no infected players take part in Tuesday’s game.

Olympiacos have included midfielders Fortounis and M’Vila in their travelling squad, however, both players are not fully fit and aren’t expected to play the entirety of the game.

Fortounis has already scored once this season from a total five shots on target. The attacking midfielder scored four times and assisted twice across all competitions last season.

Meanwhile, M’Vila also recorded two assists last season for Saint-Etienne, but from a much deeper playing position. In addition, the defensive midfielder also had an 87.5 per cent success percentage, although from a measly eight dribbles from 3425 minutes played, showing an aversion to dribbling, but being able to pull it off when the situation calls for it.

Further, while starting centre back Ruben Semedo has also travelled to Cyprus and will most likely start against Omonia, the player’s future at Olympiacos has been put in doubt by stories emanating from Portuguese outlets Record and O Jogo linking him with a move to domestic giants Benfica.

Benfica have just sold centre-back Ruben Dias to English side Manchester City and are looking for a replacement. It is likely that the player’s future will be decided following a prospective qualification to the group stage for Olympiacos and a subsequent official bid from Benfica.

Speaking to Greek outlet Fos before the game, Omonia legend Sotiris Kaifas said that the game will be very difficult for Omonia. “For me, it’s very difficult at this point. From the moment we failed to score in the first game. Only hardcore supporters can think of qualifying now. We have to be objective”, Kaiafas said.

“If the score was 1-0 then I would believe in qualifying. Now we have to score three goals. We’re not playing with any two-bit club. We are playing against Olympiacos Piraeus! And if Olympiacos score once, we will then need four goals”, he concluded.