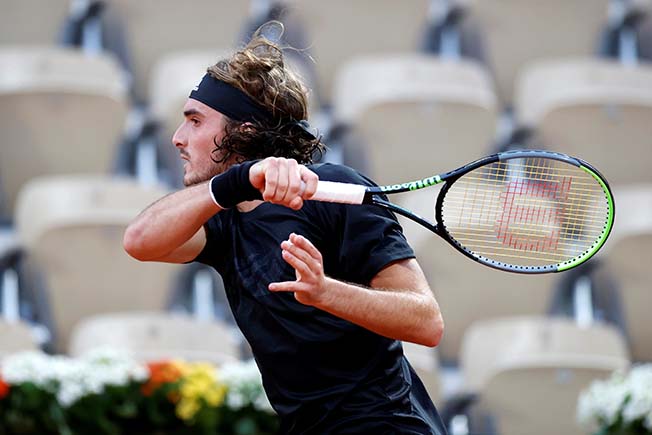 World number six Stefanos Tsitsipas clawed his way back from two sets down to beat little-known Jaume Munar 4-6 2-6 6-1 6-4 6-4 and survive a French Open first round scare on Tuesday.

The Greek star, a losing finalist in Hamburg on Sunday, looked to be cruising through the first set after breaking the Spanish clay court specialist at the start to go 3-1 up.

But his lead eroded as did his concentration and Munar countered the Greek’s power with some superb baseline winners to race back and win the first set 6-4.

Fifth-seed Tsitsipas, who lost in his first match at the Italian Open earlier this month, started crumbling under pressure, littering the court with dozens of unforced errors.

Trailing by two sets Tsitsipas buckled down, cutting back his mistakes and playing on his opponent’s weaker backhand.

He pulled a set back when Munar pushed a backhand into the net and kept up the pressure to level.

The pair traded blows in the fifth before Tsitsipas bagged a key break when Munar sent a forehand long.

The 22-year-old then finished off the contest with his first match point to win the battle after three hours and 12 minutes, another forehand error by the Spaniard handing him victory.

Highlights of the third day at the French Open on Tuesday (all times GMT):

Russian Andrey Rublev rallied from two sets down to beat American Sam Querrey 6-7(5) 6-7(4) 7-5 6-4 6-3. Rublev, the 13th seed, came into the contest having won his third title of the year at the Hamburg European Open on Sunday.

Australian Open champion Sofia Kenin made a strong start against unseeded Russian Ludmilla Samsonova before losing momentum after a rain delay but the fourth seed recovered to seal a 6-4 3-6 6-3 victory.

1120 PLISKOVA BATTLES PAST SHERIF, OSTAPENKO THROUGH

Second seed Karolina Pliskova of the Czech Republic overcame a sluggish start to beat Egyptian qualifier Mayar Sherif 6-7(9) 6-2 6-4 in the first round.

Pliskova retired during the final of the Italian Open in Rome last week after receiving treatment on her back and leg.

Jelena Ostapenko, the 2017 champion, eased into the second round with a 6-2 6-1 victory over American Madison Brengle.