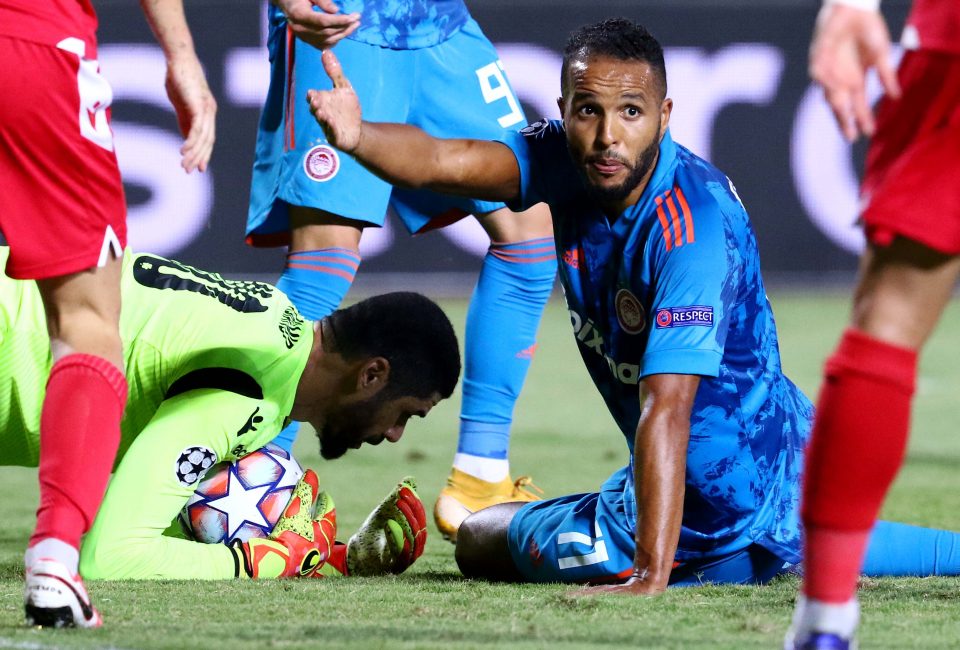 It proved to be a mountain too high to climb for Omonia, who did not manage to overturn the 2-0 loss from a week ago and ended the game against Greek giants Olympiacos on Tuesday night with a goalless draw at GSP Stadium in Nicosia.

Henning Berg’s team will not play in the Champions League group stage in the upcoming season, but his players can hold their heads up after a convincing game against a much stronger side.

It was a difficult build-up for the home team, after two of their players tested positive for Covid-19 in the last week.

Omonia fielded a slightly different team from the first leg, with Michal Duris upfront along with youngster Marinos Tzionis and Ioannis Kousoulos in the midfield instead of key payers Thiago, Jordi Gomez and Kaly Sene, all sidelined at the beginning of the decisive game.

Olympiacos started the encounter with good pace, prompting the first chance of the game in the fifth minute, when a shot by Youssef El Arabi, last week’s hero for the Greek side, was saved by Fabiano.

Omonia gingerly started taking control of the game, like they could not do in the first leg, and, in the 14th minute French winger Eric Bautheac came up short at the last moment as he failed to open the scoring after a quick counterattack and a great through pass by Fotios Papoulis.

Serbian winger Lazar Randelovic, one of the best players on the pitch last week in Athens, responded for Olympiacos when he missed the goal by a few inches from a very good position.

Shortly after Bautheac, one of the most proactive players on the pitch throughout the first half, saw the ball snatched away from him at the last second with the goal at his mercy after a great tackle by Ruben Semedo saved Olympiacos from conceding the first goal of the game.

The teams ended the first half goal less, with the home side much more aggressive and motivated than the one seen in Athens.

After the break, Berg’s men resumed the game with the same spirit shown in the first half.

In the 46th minute Spanish referee Antonio Mateu Lahoz booked the first player of the encounter, Olympiacos’ Ousseynou Ba, after a tackle on Duris, but Bautheac’s free-kick from a dangerous position whistled past goalkeeper Jose Sa’s goal post.

Olympiacos suddenly woke up in the 65th minute when Fabiano miraculously kept his goal intact after a penalty area scramble that saw him denying El Arabi and Randelovic in quick succession.

Three minutes later, Berg sent in Ernest Asante and Andronikos Kakoullis for Duris and Papoulis, hoping to change the tempo of the game.

However, Olympiacos’ better overall form and more experienced players proved decisive for the Greek side, which, as the match progressed, started threatening Omonia’s goal with more consistency. Only Fabiano’s impressive string of fine saves kept the home team level until the final whistle.

A bitter end to a great run for Omonia, but the qualification to the Europa League group stage is still undoubtedly an accomplishment for a team that only a few years ago seemed inevitably destined to disappear from the European football stage.

Condensed Champions League to start under shadow of Covid-19