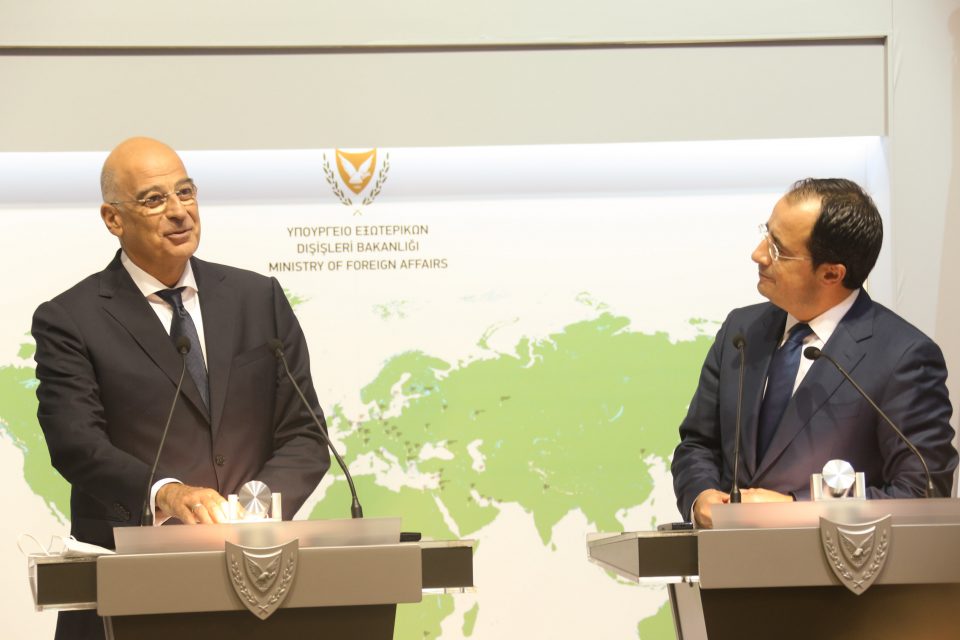 Dendias and Christodoulides in Nicosia on Wednesday

On the eve of a crucial EU summit both Turkey and Cyprus on Wednesday made competing claims for support.

The Special European Council is due to tackle the issues of European sanctions on Turkey called for by Cyprus and those on Belarus, which the island is alone in not backing.

Turkey said it expects the EU to take concrete steps at its meeting to update a 2016 migrant deal and a customs union, while Cyprus called for solidarity and action against Ankara.

On Wednesday Foreign Minister Nicos Christodoulides met with his Greek counterpart Nikos Dendias, with the latter saying that: “Greece supports Cyprus’ request for sanctions against individuals involved in the illegal activities within Cyprus’ EEZ”.

He also said that Greece remains open to imposing financial sanctions on Turkey.

Earlier in the day Christodoulides met his Spanish counterpart Arancha González Laya, with the latter stressing that the only way out of the sticky situation was through dialogue.

“Cyprus looks to the EU and its partners for solidarity in action,” Christodoulides said.

“Concretely upholding our common values and interests, and implementing our own decisions is of the essence,” he added.

The meetings took place as President Nicos Anastasiades travelled to Brussels to participate in the Special European Council on Thursday and Friday.

Anastasiades was also scheduled to meet President of the European Council Charles Michel on Wednesday.

Cyprus is withholding its consent to EU sanctions on Belarus because it wants tougher measures from the bloc on Turkey, which it says is violating its maritime territory in a search for hydrocarbons.

Greece supports Cyprus’ position, even though Athens has agreed to resume talks with Ankara to address the row that escalated in recent months. Turkey dismisses the criticism and says it is protecting its legal offshore jurisdiction.

He urged an update to the 2016 deal under which Ankara curbed migrant entries into Europe in exchange for financial help and visa-free travel in the Schengen region. “These things can’t be one-sided and that is our expectation,” he said.

EU leaders will address the eastern Mediterranean tensions on Thursday. Talk of sanctions on Turkey have faded since Athens and Ankara moved toward dialogue.

In an address read out at a school on Wednesday, Anastasiades said that it is necessary for Turkey to put aside any excessive action against the Greek Cypriots as well as ending its illegal activity within the Republic’s territory.

“It is the only road that will create the conditions necessary… that will bring about the end of this unacceptable situation and the restoration of peace in Cyprus,” he said on Wednesday.

Also ahead of the summit, Turkish President Tayyip Erdogan sent a letter to EU leaders – excluding Greece and Cyprus – saying Greece and Greek Cypriots caused the regional tension, adding he hopes they will show an unbiased approach on Thursday.

“Our expectation from the EU is to remain objective, treat everyone equally and back dialogue and cooperation,” Erdogan said in the letter sent on Wednesday.

Earlier in the day a rough outline of what to expect on Thursday was presented to the press in Brussels by a diplomatic source, who said that a strong message will be sent to Turkey.

The official stressed that Turkey will be called upon to commit to de-escalation, reaching a peaceful resolution to its disagreements with Greece and the end of illegal activities within Cyprus’ EEZ.

Otherwise, the official said, there will be sanctions.

He also stressed that Michel’s “goal is to express the EU’s desire for stability in the region and full solidarity with Greece and Cyprus.”

He further said that the EU welcomes the step towards Greece and Turkey beginning talks, as well as again calling on the end to drilling within Cyprus’ EEZ.

Last week, a diplomatic source said that: “The most you’ll get is a statement dressed up in generic lingo, something to the effect the EU calls on all parties to engage in dialogue and refrain from raising tensions in the eastern Mediterranean.”

But as the parameters for talks are being set, Ankara also pushed out messages – in this case in the form of a video on Wednesday – that it is willing to defend its interests in offshore waters via military means.

The video, shared on Twitter by the presidential communications department, glorifies a sixteenth century naval victory which led to the Ottoman Empire taking control of the Mediterranean.

This doctrine, called Blue Homeland in the video and accompanying song, has been championed by Erdogan’s government as it challenges Greek and Cypriot maritime claims that confine Turkey to narrow strips of Aegean and Mediterranean coastal waters.

Anastasiades said on Tuesday that Cyprus will seek to save Europe’s dignity and trustworthiness at the European Council meeting.

“We will seek to rescue the trustworthiness and dignity of both Europe and the European citizens of Cyprus during the upcoming European Council meeting.”

Commenting on the matter on Tuesday and whether Cyprus will use the sanctions on Turkey as a bargaining chip for sanctions on Belarus, Anastasiades said: “Sanctions are not an end in themselves. The aim is to finally realise the prevalence of what Turkey’s obligations as a candidate country are in line with EU principles and values.”

Ethiopia’s chapel in the sky