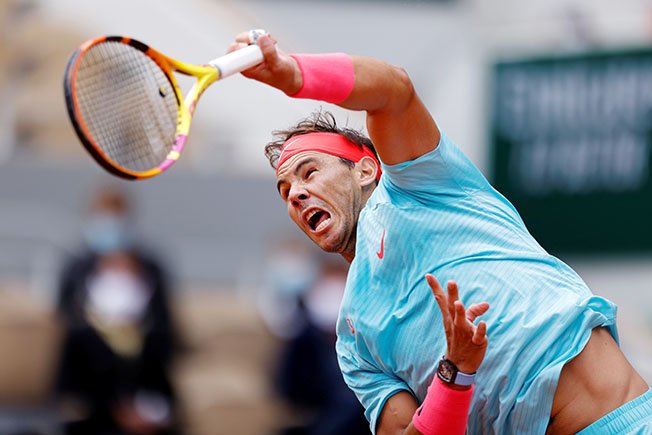 It was business as usual as Rafa Nadal continued his quest for a record-extending 13th French Open title with a 6-1 6-0 6-3 crushing of American Mackenzie McDonald on Wednesday to reach the third round.

The claycourt master played deep, using his forehand to devastating effect to set up a meeting with Japanese Kei Nishikori or Italian Stefano Travaglia.

After world number 236 McDonald won the second game, Nadal bagged 11 games in a row to move two sets up and despite some resistance from his opponent early in the third set, he had no trouble improving his win-loss record at Roland Garros to 95-2.

“My objective is to play as well as I can. It was a good match for me today. I’m very happy,” Nadal said.

“Then it’s another difficult match. We’ll see, I hope I’ll be at a good level. It’s always special for me to play here in Paris, on court Philippe Chatrier.”

The Austrian third seed, beaten by 19-times Grand Slam champion Rafael Nadal in the last two Roland Garros finals, was brimming with confidence on his favourite clay surface after winning his first Grand Slam title at this month’s U.S. Open.

Three-time Grand Slam champion Stan Wawrinka said he was ready to challenge for his second French Open title after a comfortable 6-3 6-2 3-6 6-1 win over German Dominik Koepfer to advance to the third round on Wednesday.

The 2015 Roland Garros champion put his muscular build to good effect to hit 51 crunching winners despite the slow conditions on Court Suzanne Lenglen in his first career meeting against the 61st-ranked German.

The 16th seeded Swiss suffered his only service break in the third set, which he went on to lose, and broke his opponent’s serve five times during the match to complete the victory in 2 hours and 8 minutes.

“I’m happy so far with my start at the French Open,” Wawrinka told reporters.

“I’m ready for it. I’ve been practising right. I’m feeling good. I like the condition here. I enjoy being back playing Grand Slam. It’s great to be able and have the chance to play this year French Open.”

“Let’s see what will happen.”

In the women’s draw, Victoria Azarenka’s unhappy French Open campaign ended on Wednesday as the former world number one was beaten 6-2 6-2 by Slovakia’s Anna Karolina Schmiedlova in the second round.

The Belarussian 10th seed, who was criticised for moaning about the cold and damp conditions in her opening round win, capitulated in feeble fashion against her 161st-ranked opponent.

Her defeat continued an exodus of leading seeds with Johanna Konta (9), Madison Keys (12),last year’s runner-up Marketa Vondrousova (15) and another former world number one Angelique Kerber (18) having already been beaten while sixth seed Serena Williams withdrew on Wednesday with an Achilles injury.

Azarenka’s defeat means that none of the women’s semi-finalists at this month’s U.S. Open are left in the draw here, although winner Naomi Osaka did not travel to France.

“I felt like nothing really was working, but I still had to find a way to win, and I didn’t,” Azarenka, runner-up to Osaka at Flushing Meadows, told reporters.

Fifth seed Kiki Bertens narrowly avoided joining the exodus of French Open women’s favourites as she survived a match point against Italian former runner-up Sara Errani before hobbling into the third round on Wednesday.

Bertens eventually won 7-6(5) 3-6 9-7 in a claycourt duel lasting more than three hours but her prospects of continuing look bleak after she left the court in a wheelchair after struggling physically in the final set.

The 33-year-old Errani, who came through qualifying to start her first Grand Slam for two years after a doping ban, served for the match three times.

Ethiopia’s chapel in the sky