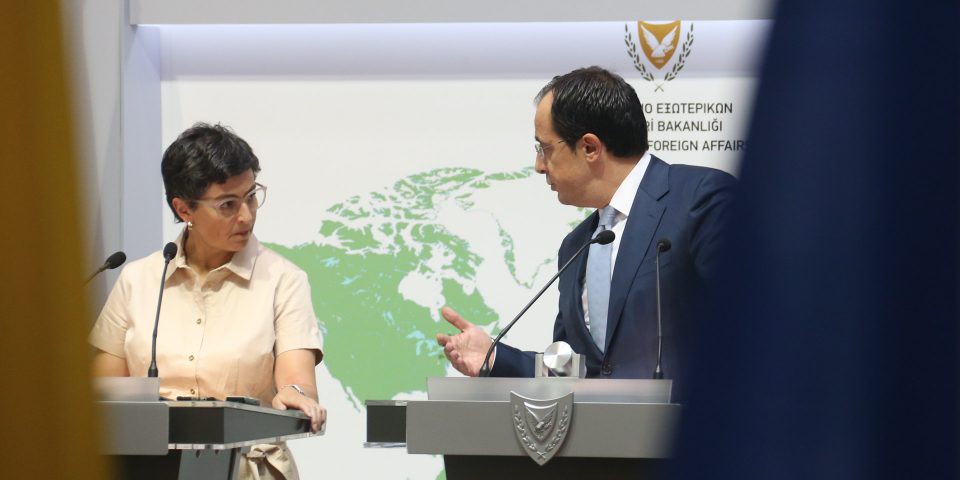 Spain’s Foreign Affairs Minister Arancha González Laya on Wednesday expressed Madrid’s solidarity and support for Cyprus in the face of tensions with Turkey in the Eastern Mediterranean and said Spain rejected unilateral moves.

A long lasting solution could only be found through dialogue, she said, following a meeting with her Cypriot counterpart Nicos Christodoulides in Nicosia.

In joint statements, the Spanish FM said that her presence in Cyprus was “very clearly meant to send a signal to you, as I told you but also the president this morning of solidarity, of support to Cyprus in the face of tensions. Tensions in the Eastern Mediterranean region. Tensions with Turkey.”

Tensions, she added, “that we believe cannot be solved through unilateral actions.”

“We do not believe that there is a unilateral solution to the problems of the Eastern Mediterranean region. Therefore we reject unilateral moves that are not helping in finding a long lasting solution. The only avenue for a long lasting solution is through negotiations, through dialogue, which is what Spain has been advocating between Greece and Turkey and which Spain advocates between Cyprus and Turkey,” she noted.

In his comments, Christodoulides said Cyprus was looking to the EU and its partners for solidarity in action. “Concretely upholding our common values and interests and implementing our own decisions is of the essence,” he said.

He said Cyprus and Spain shared a long history, dating back centuries and over the years had established a concrete relationship, at the political and economic level, as well as people to people contacts.

“During our discussion today we reaffirmed our mutual will to work with a view to further enhancing and expanding our cooperation, in fields such as trade, investment, education and tourism,” he said.

Christodoulides said the past few months had been challenging due to the pandemic “proving that only by working together we can achieve concrete results”.

He also expressed appreciation for Spain’s continued support to our efforts to reunify Cyprus, as well as for Spain’s support within the Council of Europe on the need for Turkey to fully implement all judgments of the European Court of Human Rights.

Christodoulides said he had briefed Arancha in-depth on Turkey’s escalating provocations in the region.

“Tomorrow’s European Council will hold a crucial, strategic discussion on Turkey, in light of these developments, following numerous discussions and decisions. Cyprus looks to the EU and its partners for solidarity in action,” he said. “Concretely upholding our common values and interests, and implementing our own decisions is of the essence”.