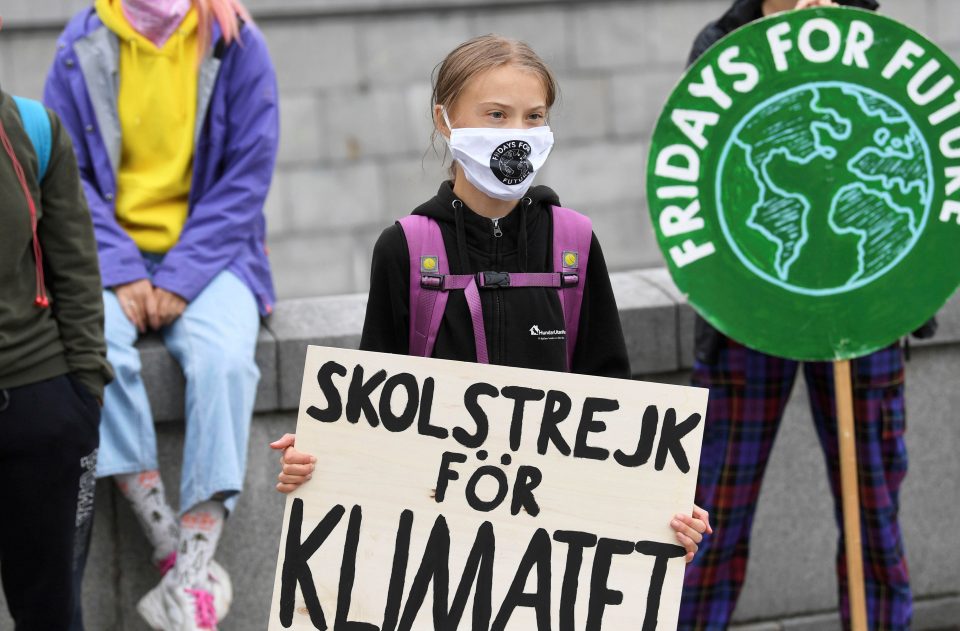 It appears that my grandchildren and friends are applying for citizenship of Greater Thunbergia (GT). GT was founded by a sour-faced, pallid young autistic with attitude. Whether or not the whole thing was a good idea to start with, regrettably GT has since been taken over by a team of hacks, international left-wing exploiters and advertising executives, the kind of ruthless people who can smell a money-making opportunity from half way across the globe.

Furthermore, the haute monde of these political free-loaders have always recently returned from Davos where lavish cocktail parties are held to underline the serious nature of world hunger and global catastrophe and to which fleets of Boeings fly in those fearlessly determined to aid the planet.

The new wannabe citizens clamouring to worship at the throne of the aforesaid school drop-out are mostly motivated by such laudable ambitions as reducing the temperature of the planet by abolishing plastic and protecting wildlife by abolishing fossil fuels. Or is it the other way round?

These prospective new citizens display certain characteristics in common. For example, they don’t swallow perfectly drinkable tap-water as it is just too yucky. They prefer to carry their obligatory replenishment electrolytes in special insulated steel bottles that cost lots of quids and energy to manufacture. This, unless, for example, they suddenly run out of this source whereupon they buy plastic bottles of water from the nearest supermarket without any apparent conflict of purpose or compunction.

These citizens frown upon gas-guzzling aircraft trips, unless, of course, it’s the easiest way to get to that stag-night in St. Andrews. They don’t like large off-roaders which, as we all know, are vital for battling across darkest Sussex. However, last week when the weather turned nippy five of them crushed into my BMW, started the engine and turned the aircon heater up to maximum while they enjoyed the cacophony of so-called music and the impenetrable lyrics of what, I understand, is called ‘Wrap’ through their headphones. Their only explanation was that it was so bloody cold out there.

These few examples really show up these save-the-planet gestures which they profess to esteem for just what they are. Planet saving is great, just as long as it does not in any way prove the least bit inconvenient to themselves in person.

How deep a philanthropic or planetary-protective motive is that, I ask you?

There is just a sprinkling of those stalwarts who are prepared to go the whole distance. They are embarking on the near cave-man way of life, all back to the forests and vegan experiments that last longer than into January. I imagine that, without any upbringing to yield them the age-old techniques of simple survival, they’re going to have a hard time building shelter, knowing which mushrooms to nosh and how to make a fire by rubbing two boy scouts together. Finding the required comestibles might need patience but once found, gathering is easy. Hunting, however, requires skill. Successful hunting and fishing, for them therefore, lie some distance in the future. Their dedication though, seems to be profound just as long as it is understood that under no conditions will they agree to be parted from their personal cell-phones.

As far as I understand it, saving the planet is regarded as most praiseworthy. Those two funny people who vacated their soft lives in the royal residences of UK and swapped the lot for a ten million quid luxury pad in LA showed that.

But let’s save a special place in the international archives for the great overweight of the western nations. An enormous display of cookery programmes during the lockdown TV schedules are predicted to result in a several per cent rise in the vast legions of the ugly, fat and medically obese nations. The obvious road to national weight reduction should make it hard for fatties to get jobs. Opprobrium for the cohorts of the overweight and selfishly indulgent should be made official. It should become difficult for these crowds of fatties to advertise their selfishness. Yet there seem to be more of them among TV personnel than in the public at large. Figures are worsening year by year but, already, a major cost to the national health services in 2050 will be the preserving the citizens who self-poisoned themselves for decades yet still expect to have their lives saved at the expense of fellow citizens.

To quote the aforementioned GT leader, ‘How dare they!’

Passport scandal, the innocent go down with the guilty

‘Politics at the precipice’

Proper use of EU funds crucial to recovery