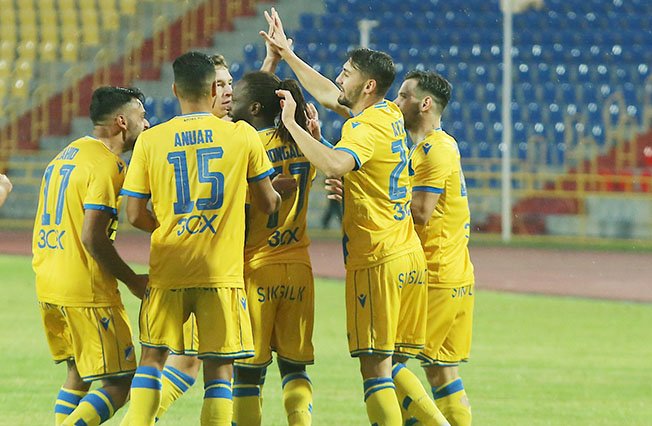 Apoel face Czech side Slovan Liberec in the Europa League playoff round on Thursday night in the Czech Republic (8pm).

Should the Nicosia giants defeat the Czechs, it would be the first time that they qualify for the competition’s group stage through a route different to the Champions’ path.

Previous instances of Europa League group stage presence were achieved after dropping down from the Champions League playoff round.

Apoel will have to contend with the unavailability of Christos Wheeler, the only experienced natural left-back at the club, with 20-year-old Konstantinos Karagiannis never having featured for the senior team before.

It is expected that manager Marinos Ouzounidis will start right-sided defender Emilio Nsue at left-back with Portuguese Andre Geraldes filling in at right-back. In response to a question on this particular selection preference after a league game using a similar setup, Ouzounidis offered a somewhat vague explanation but affirmed that he prefers Nsue on the left with Wheeler out.

“Today we didn’t have a left-back”, said Ouzounidis after Ioannou’s transfer to Nottingham Forest was confirmed and Wheeler got injured. “Andre is already a very good player and I’ve spoken to Emilio who knows he can also play as a centre-back. The good thing for me is that I have two players who can fit in the starting eleven. It is better that today Nsue played at left-back rather than Geraldes”, the Apoel manager added.

Speaking before the Slovan game, Apoel press officer Nektarios Petevinos said that the club’s goal is to “qualify to a European competition’s group stage for the ninth time”.

“Slovan are the most difficult hurdle we’ve faced so far, they are a very serious side but we are going to try to qualify”, added Petevinos.

On Apoel’s recent transfers, Petevinos said that the “addition of all new players has improved the side”.

Meanwhile, Slovan Liberec are facing Apoel after a heavy 3-0 defeat to FK Pardubice on Sunday. However, not much can be gleaned from this result as the Czech side rotated heavily before their upcoming Europa League encounter, with seven players who had been included in the team’s game against Steaua Bucharest not in the starting 11 against Pardubice.

Slovan Liberec are currently in seventh place in the Czech first division, having taken seven points from five games, winning twice, drawing once, and losing twice in the process.

Although Slovan have the 12th lowest shots per 90 minutes average in the league so far, they have the fourth highest percentage of shots on target. Further, they also have the fifth highest number of shots from outside the penalty area.

This means that while they don’t attempt a great deal of shots, the ones they do attempt are of generally good quality, although the distance factor may be in favour of Apoel, so long as goalkeeper Miguel Silva remains focused throughout the game.

Speaking before the game to Czech outlet Sport, Slovan Liberec manager Pavel Hoftych said that while Apoel are indeed a “big team”, they are not in the same “top condition” as they were a few years ago.

“They signed forward Atdhe Nuhiu who played 277 games for Sheffield Wednesday”, Hoftych said. “We have to compete with a strong side and challenge for the win”, he concluded.