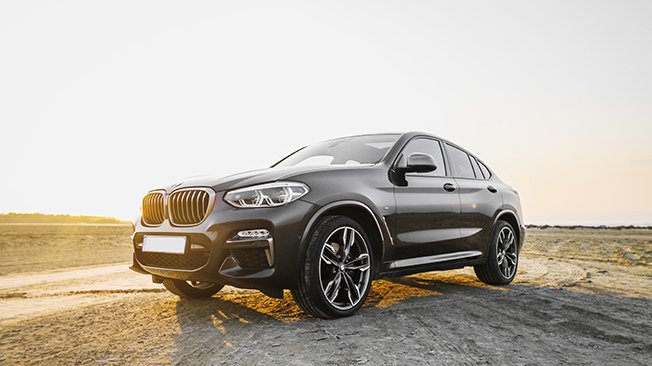 A review of the X4 without a mention of its controversial shape would be like introducing a pop-music radio listener to his first death metal track and then proceeding to critique and appraise the individual song. Much like listening to your first death-metal track, the onus when reviewing a car like this is to first step back and assess the genre as a whole. If satanic growling is not your thing, you’re probably indifferent to the melodic nuances of Cannibal Corpse’s latest single. Likewise, the ‘SUV-coupe’ body style has proved controversial since its inception just over a decade ago, with many journalists standing by the view that its arguable style advantage over a regular SUV shape is offset by its consequential shortcomings in functionality. This week, I drove the 2019 BMW X4 to see for myself what all the genre-blending fuss is about.

When BMW introduced the X6 in 2008, they were entering uncharted waters. An SUV with a sloping rear roof life? An SUV that is also a Coupe? It seemed a strange idea initially. Jeremy Clarkson reviewed it in a Top Gear episode that aired around the start of the great recession, criticising its untimely prioritization of design, saying it was ‘built by a world, for a world, that doesn’t exist anymore’. How wrong he would be. Not only did the X6 go on to sell in astonishing numbers worldwide, but in just a few years it pioneered the emergence of an entire segment. Today, ‘SUV-Coupes’ are offered by Porsche, Audi, Tesla, Mercedes, Toyota and even Lamborghini – some of which have two or even three size offerings of this strange new silhouette.

So, what do I think of it? Well, there is no denying that some functionality is lost. Where a traditional SUV will offer comfortable rear headroom and a conveniently square-shaped boot, SUV Coupes trade both rear passenger and boot space for style. Inconvenient? Maybe, but since when has it been unacceptable to prioritize style? Christian Louboutin famously admits that ‘comfort is not my focus’, and his red-bottomed shoes don’t seem to have done too badly. Similarly, if practicality was the only measure by which women chose handbags, shops would do a roaring sale on hiking rucksacks. It is not a sin to care about how you look, even if it is at the expense of your dog’s ability to sit upright in the boot. Sorry, Max.

From the outside, the X4 is a good-looking car – especially in this dark but not-too-serious grey. Not many ‘sensible’ SUVs I feel like taking a picture of when walking away from: this is one of them. The interior looks sophisticated in this choice of caramel leather, and the tech (minus the absence of adaptive cruise control) is impressive. To turn up the volume of the optional Harmon Kardon stereo, place your elbow on the centre arm rest and twiddle your index finger clockwise – a sensor under the screen will read your signal and duly make you feel like an airbender. Unfortunately, it is not responsive enough to be considered anything other than a fun gimmick, but it is a really cool feature on new BMW’s and every person I showed (usually within their first 30 seconds in the car) resoundingly agreed.

Start driving and you’ll quickly notice that this isn’t any old X4. This is an M40D. Not quite the 503hp, range topping X4M, but a semi-skimmed sporty offering that unconventionally employs a 3-litre diesel for thrust. Is it any good? Put it this way, European emissions regulations are making it diminishingly sensical to design and build diesel engines. The European car market is still recovering from the diesel-gate scandal, and road tax legislation around the world (including here in Cyprus) has been updated to penalise diesels for their high carbon monoxide emissions. Yet, despite all of this, BMW and Audi continue to put diesel engines not only in their smaller, more economical cars, but larger and more sporty ones as seen here. Why? The reason is simple. It is a brilliant motor. Nipping around town, it’s smooth and hearty power delivery makes it easy to see why BMW stand unphased by the direction of legislative wind.
Horsepower? 326. Healthy, but not amazing. What you’ll really feel is the torque – the X4 M40d produces 680Nm of the stuff. For reference, that’s more than what you get from a Ferrari 458, Lamborghini Huracan or even, astoundingly, a McLaren F1. It makes overtaking a breeze and joining traffic or roundabouts a thoughtless endeavour. If you can see the space, you’ll make it. What’s more, being a diesel, you get decent fuel economy irrespective of the performance – brim the tank and the range meter will read 850km. That’s enough for 5 round trips from Limassol to Nicosia. Quite the luxury to have to fill up so rarely.

Unfortunately, despite BMW’s best efforts, the X4 simply can’t escape the fact that diesel engines sound boring. To combat this, what they’ve done is develop a system that, when in sport mode, pumps fake engine sound through the speakers. When I first read about this in the press release, my inner purist was appalled. It just seems such a vulgar thing to do, and to make matters worse the sound it plays isn’t even that of a diesel engine. Why masquerade as something you’re not? In practice, I am ashamed to admit that I did not hate it as much as I had expected to, but I still think it’s an unnecessary falsehood.

The X4 undoubtedly claws some petrol-head points back with the way it handles. This is not something I would usually mention in the review of a midsize-luxury SUV, as it is very unlikely to ever be part of a customer’s purchasing criteria, but the steering in the X4 is delightful. BMW have always prided themselves on being ‘driving machines’, and despite the dynamic compromises of being a raised, 4WD car, the X4 is definitely not lacking for true BMW DNA. The thick steering wheel is a pleasure to handle, and it makes it easy to confidently place the car on the road.

All in all, the X4 surprised me. I don’t quite know what I expected, after all this is a pretty niche engine in a pretty niche segment of the market, but I know that at the end of my time with the M40d, I did not want to give it back. With a starting price of €68,700 and a list of options that makes adding €10,000 pretty easy, the X4 is by no means a cheap car, especially if we consider the interior and finish is

basically that of a 4 series. Would I buy one? Maybe. I really enjoyed driving the car, although I would probably wait a couple of years and let someone else take a €30,000 hit first.