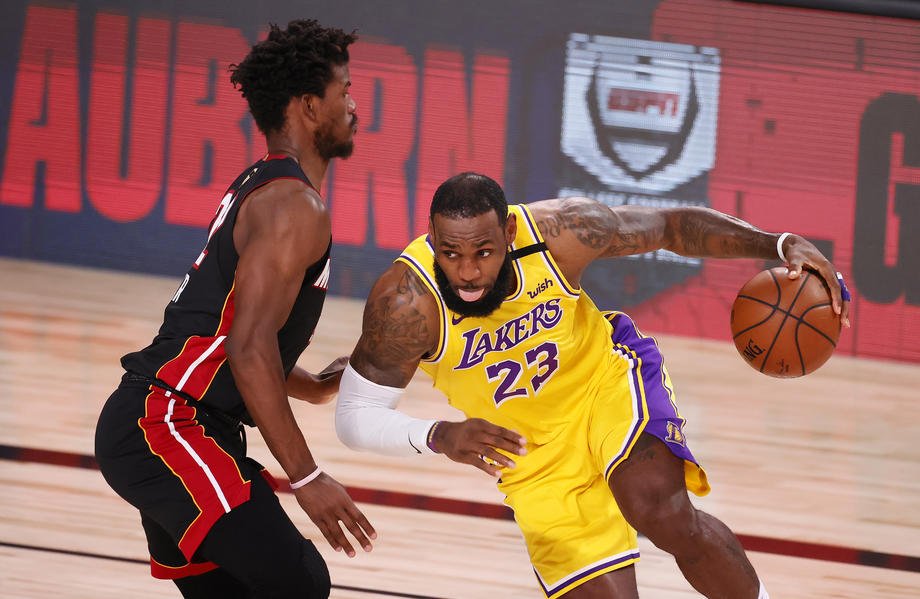 The Los Angeles Lakers being the more physical team in Game 1 of the NBA Finals was the difference in the outcome, Miami Heat Coach Erik Spoelstra said.

“The Lakers set the tenor, the force, the physicality for the majority of the game and they just took control and we weren’t able to get it back,” Spoelstra said.

Anthony Davis scored 34 points and grabbed nine rebounds, and the Lakers rolled to a 116-98 victory over the Heat on Wednesday near Orlando.

“We’ve got so much more work to do,” James said. “The job is not done and we’re not satisfied with winning one game. It’s that simple.”

Jimmy Butler had 23 points while Kendrick Nunn came off the bench to score 18 points for the Heat. Tyler Herro finished with 14 points, and Jae Crowder added 12.

“We’ve just got to be tougher,” Butler said. “We’ve got to put up more of a fight. I don’t think that we did that and then it doesn’t help when whenever we don’t make shots. It’s been that way all year long whenever we start to miss a couple of shots we don’t do what we’re supposed to on the other end.”

Game 2 of the best-of-seven series is Friday.

Injuries, in addition to the Lakers’ solid play, hurt the Heat. Miami lost guard Goran Dragic in the first half with a left foot injury, and he did not return. Center Bam Adebayo also did not come back after leaving with a strained shoulder midway through the third quarter.

Their status for Friday is unknown.

Dragic, who was averaging 20.9 points per game in the postseason entering the contest, finished with six points in 15 minutes. Adebayo, who was putting up 18.5 points and 11.4 rebounds per postseason contest, had eight points on 2-of-8 shooting in 21 minutes.

Butler tweaked his left ankle shortly before the end of the half when he rolled it on a drive to the bucket, but he continued to play.

“A little bit sore,” Butler said. “I’ll be OK. Some treatment and I get ready to go again. I got to be ready to go.”

After a slow start, the Lakers took control in the second quarter and blew the game open in the third. They began the third on 22-7 run for an 87-55 lead after a Davis dunk midway through the period. Los Angeles held a 93-67 edge heading into the fourth.

“We’re much better than we showed tonight,” Spoelstra said. “You do have to credit the Lakers, and we’ll get to work for the next one.”

The Lakers, who trailed by as much as 13 in the first quarter, used a 13-0 surge capped by a Markieff Morris 3-pointer for a 54-43 advantage with five minutes remaining in the second period. They increased the margin to 65-48 going into the break.

Los Angeles outscored Miami 34-20 in the second quarter. However, James said the Heat’s quick start got the Lakers’ attention.

“I don’t think at the beginning that we were physical enough,” James said. “You actually have to get a feel for how hard Miami plays. I think they smacked us in the mouth, and we got a sense of that.”

The Lakers also outrebounded the Heat 54-36.

Greece ‘will spare no effort’ in aiding resumption of Cyprus talks