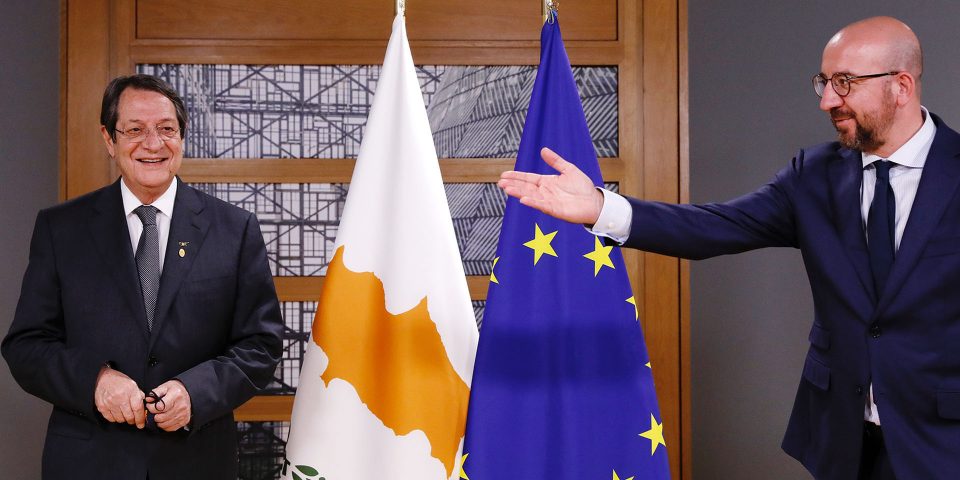 All of the people of Cyprus have the right to live in harmony and co-create in conditions of stability and peace, security, prosperity and progress, President Nicos Anastasiades said on Thursday in his address to mark the 60th anniversary of Cyprus’ independence.

The Cyprus problem and Turkey’s illegal activities off the island, the impact of the pandemic on the economy and the pending reforms were the issues Anastasiades mentions in his pre-recorded televised address.

“The 60th anniversary of the proclamation of the Republic of Cyprus finds our country facing new challenges due to the ongoing Turkish illegal actions, either by invading the economic zone of Cyprus EEZ or due to the threats for the illegal settlement of Famagusta,” Anastasiades said.

These actions, he said, are contrary to international law, resolutions of the United Nations Security Council and the UN Convention on the Law of the Sea.

Unfortunately, despite the condemnation of its actions by the UN, the EU and the international community, Turkey continues its illegal and unilateral actions, he added.

Anastasiades said he had no option but be in Brussels for the European Council summit on the day Cyprus celebrates its independence from British rule to defend what what was handed over to the Cypriot people through blood and sacrifices.

The president said this reference of his was not random, “because, unfortunately, before the leaders of the European states there will be a letter from the Turkish president in which, with excessive audacity, he claims that the Republic of Cyprus is extinct since it has been dissolved.”

Anastasiades said the EU’s principles and values do not allow relaxations or concessions on a candidate country for EU membership and that disregards its obligations to a member-state, blatantly violates the human rights of its own citizens and that has been repeatedly condemned by a plethora of UN resolutions, Security Council decisions, and the European Court of Human Rights.

“What I expect from the European Council is a more practical and effective stance to end gun diplomacy and the crisis to be followed by dialogue or referral to the international court, always on the basis of international law and the law of the sea,” he said. The president was referring to the discussion by the EU leaders on Thursday and Friday on EU-Turkey relations and the situation in the eastern Mediterranean.

He stressed, however, that this did not negate the government’s stated commitment to the resumption of the negotiations process, but, on the contrary, it would help to conduct constructive and good faith negotiations, away from any threats and intimidation.

Unfortunately, he said, “despite our determination and sincere will, Turkey’s uncompromising attitude, irrational demands and demands did not allow a functional, sustainable and lasting solution to the Cyprus problem.”

Such a solution “would lead us to a truly sovereign, independent and European state, away from anachronistic guarantees, the presence of foreign troops or any dependence on third parties,” he said.

“Today’s anniversary gives me the opportunity to address our Turkish Cypriot compatriots, assuring them that we understand their sensitivities but at the same time I want to make it clear that we do not ignore the concerns of Greek Cypriots,” he said.

All the people of Cyprus, he said, have the right to live in harmony and to co-create in conditions of stability and peace, security, prosperity and progress.

“But to achieve this, we need to understand that our country is an independent and sovereign state, a member of the EU, and that we do not have the luxury, for the sake of the aspirations of others, to lead to a solution that will not be functional and sustainable and will disregard the rights of its legal residents,” he said.

The president also gave reassurances that, in parallel with the efforts made to address the national challenges, “we do not fail to work tirelessly to create conditions for the well-being of the whole.”

Referring to the pandemic, he thanked the public for their sacrifices and the strength they exhibited.

He also thanked political parties saying that, despite their ideological differences with the government, their cooperation in difficult times was crucial.

Anastasiades urged everyone to continue following the protection measures against the coronavirus.

“The latest outbreak does not allow anyone to be complacent,” he said.

He added that, with prudent fiscal policy, the country has been able to tackle the effects of the pandemic so far. Due to the pandemic, however, the world economy is going through an unprecedented crisis, which does not leave the Cypriot economy unaffected.

He warned that the risks of an uncontrolled spread of the virus will have a negative impact on the living conditions and well-being of the whole.

The president also referred to the pending reforms, of the public service, local government, the justice system, the reform of the educational system, e-government and digital skills development, and the completion of the reform of the National Health System.

He said these reforms will further improve the quality of life of citizens but to achieve them, all political forces “need to go above and beyond.”

Anastasiades also said that the state of Cyprus does not belong to any government or to any political force. “It is a creation and property of the Cypriot people.”

“Therefore, those of us who govern, in whatever party we belong to, what we owe is the good of the whole and not the benefit of the parties,” he said.

What matters, he said, is the collective responsibility to deal with the problems, in order to take full advantage of the prospects that the people claim and deserve.

“I am absolutely convinced that through good cooperation with the political forces, the social partners and the will of the Cypriot people, we will successfully face both the existing challenges and those that will arise in the future.”