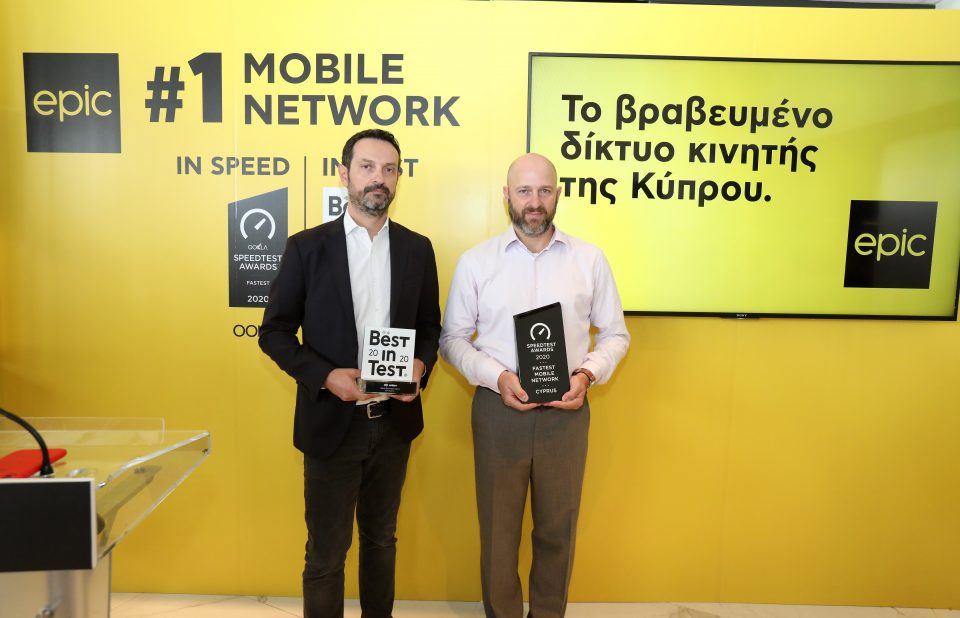 For the first time in Cyprus, a mobile network has been awarded simultaneously by two world-renowned organizations, as Epic has achieved first place twice within one year. This thrilling achievement was officially announced at a press conference organized by the company on Tuesday, September 29, 2020.

The two awards won by Epic were presented during the press conference: the “Best Mobile Network in Test” award was awarded by the independent measurements organization umlaut, which established Epic as the No.1 mobile network in Cyprus and the “Fastest Mobile Network in Cyprus” award was awarded by Ookla, the world-renowned online measurements and analysis organization.

In his speech, Mr Thanos Chronopoulos, CEO of Epic, said: “Our network awards from the two leading international measurement companies are the ultimate success story of an effort that began 2 years ago, with the acquisition of our network by Monaco Telecom. Back then, we made a promise to you and the consumers: that you will have a great network, worthy of your expectations, combined with a great value”.

Commenting on the increased demand for data that has been observed recently due to the necessary measures taken against the pandemic, Mr Chronopoulos also pointed that Epic has passed the crash test with absolute success, thanks to the commitment of the company’s personnel who “gave everything”, but also to the network investments and upgrades which were carried out in a precise and timely manner.

“We worked hard, methodically and as a team in order to reach our goal, while keeping in mind our customers, their needs and expectations. We are extremely proud that Epic has managed to bring an international distinction to our country”. In closing, Mr Chronopoulos promised that Epic will continue to play a leading role in the industry, providing a great network and great value. “We will continue to disrupt. Not only through a state-of-the-art mobile network, but also by upgrading access to fixed broadband networks with the implementation of a privately-owned fibre-optic network, in order to cover the majority of households in Cyprus”.

During the presentation, the CTIO of Epic, Mr Yiannis Michaelides, talked in detail about the network investment and development as well as the results of the credible organizations Ookla and umlaut that brought Epic to the top.

Videos from umlaut and Ookla were also shown during the press conference, in which the CEOs of these two leading organizations congratulated Epic and emphasized the importance of the two awards.

The double award is a milestone for Epic in its commercial course. For more information on the Ookla and umlaut distinctions, visit www.epic.com.cy

Art that was never finished

The Limassol Boat Show is back bigger and better