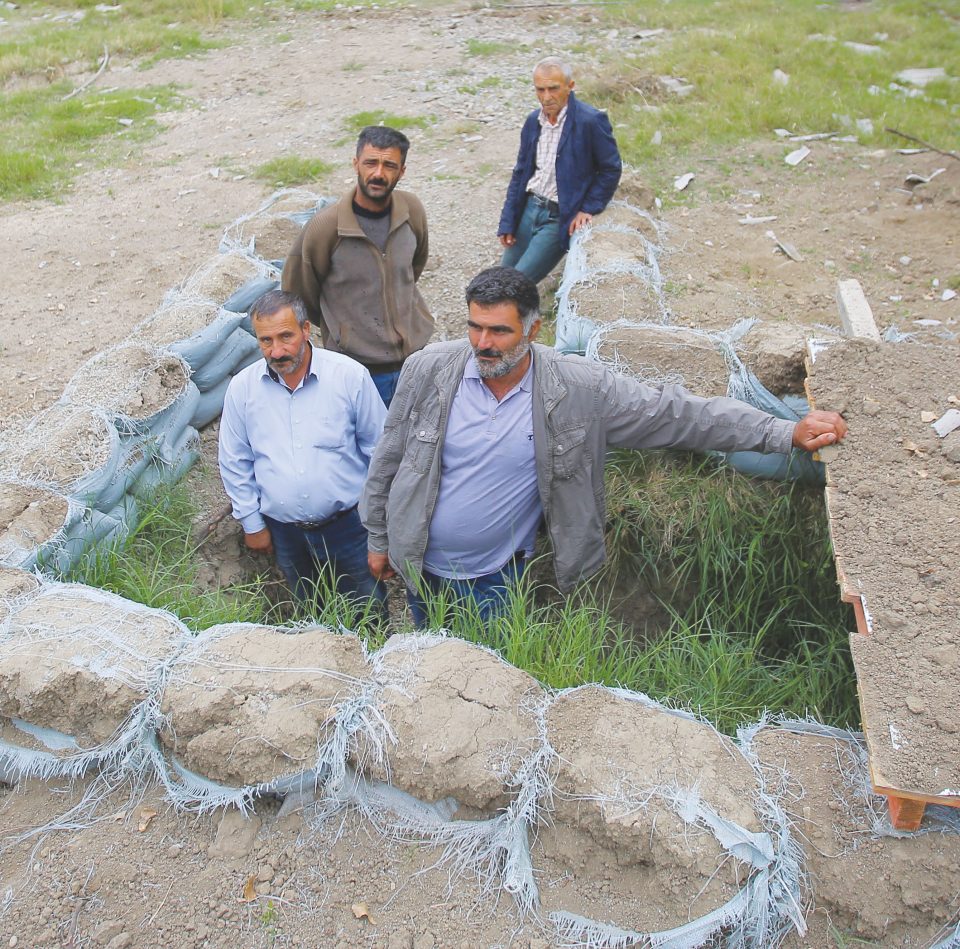 Local residents gather outside a dugout in readiness to take shelter during the fighting over the breakaway region of Nagorno-Karabakh in the city of Terter, Azerbaijan

Blood, bombs and bones as ceasefire appears elusive in Nagorno-Karabakh

Heavy fighting between Azeri and Armenian forces in and around Nagorno Karabakh hit world headlines last week, with widespread destruction and loss of life as both sides deployed warplanes, heavy artillery, tanks and drones along a 200km front.

There were calls for an immediate end to hostilities from Russian President Vladimir Putin, France’s President Emmanuel Macron and US President Donald Trump, although both sides initially rejected any return to the negotiating table.

Armenian Prime Minister Nikol Pashinyan told Russia’s Interfax news agency in Yerevan Wednesday that it was not “very appropriate” to talk of negotiations “at a time of intensive hostilities.”

Meanwhile, Azeri President Ilham Aliyev said the same day that, “We have only one condition. Armenia must leave our land. If the Armenian government complies with this, the fighting will stop.”

Aliyev was also backed up by Turkey’s President Recep Tayyip Erdogan, who rejected calls for a ceasefire until Armenia end its “occupation” of Nagorno Karabakh.

Erdogan also called for an end to the “unacceptable” involvement of France, Russia and the US in the search for a solution to the conflict.

While Turkey – and Armenia – may have subsequently taken a more moderate line, this week has undoubtedly seen “the most serious outbreak of fighting since 1993-1994,” Professor Gerard Libaridian, historian and advisor to former Armenian President Levon Ter-Petrosyan, told the Cyprus Mail.

Yet, Libaridian adds, this outbreak was also “inevitable, predictable and was predicted”.

Indeed, recent times have seen rhetoric and actions on both sides rising to a crescendo, while negotiations have been largely abandoned.

An earlier outbreak of fighting back in July saw “No diplomatic follow up to pacify the situation along the frontlines”, Olesya Vartanyan, International Crisis Group’s Senior Analyst for the South Caucasus, told Cyprus Mail.

Although Covid-19 ended opportunities for shuttle diplomacy, there were few calls of any kind on the leaderships in Baku and Yerevan, despite the fact that leaders in both capitals were engaging in “heated rhetoric and calls on the public to prepare for war,” Vartanyan says.

“When you take your eye off the ball,” Jonathan Katz, Senior Fellow with the German Marshal Fund in Washington DC, told Cyprus Mail, “the vacuum tends to get filled by those who want to keep things hot.”

Temperatures therefore look likely to continue rising in the South Caucasus, despite the approaching winter.

The seeds of the current fighting go back to when both Azerbaijan and Armenia were republics within the Soviet Union.

During that time, many Azeris lived in what is now Armenia, while largely Shiite Muslim and ethnic Turkic Azerbaijan – the larger of the two states – had a substantial ethnic Christian Armenian population.

Many of those ethnic Armenians lived in the Azeri province of Nagorno Karabakh, or ‘Mountainous Dark Garden’, where they formed a majority.

In the late 1980s, intercommunal violence between Azeris and Armenians broke out, with fighting lasting into the early 1990s, when Armenia took control of Nagorno Karabakh and seven adjacent Azeri regions.

These territories then formed the breakaway, internationally-unrecognised ‘Republic of Artsakh’, with successive UN resolutions still considering this area to be part of Azerbaijan.

The conflict also displaced many civilians, with many Armenians fleeing Azeri territory, while Azerbaijan became home to some 582,000 Internally Displaced Persons (IDPs) – one of the world’s highest numbers, proportionately, according to a 2018 report by the Geneva-based Internal Displacement Monitoring Centre.

In 1994, however, a Russian brokered ceasefire ended the shooting. This also established the Minsk Group, co-chaired by Russia, France and the US, to convene peace talks between the parties.

For the last decade, these talks have been held under a framework known as the ‘Madrid Principles’.

These would see Armenia withdraw from the seven adjacent territories, along with the right of return for all IDPs, with security guarantees for the people of Nagorno Karabakh leading to an eventual resolution of the region’s international status.

To date, though, little progress has been made on any of these issues.

Instead, “After 25 years of negotiations,” Farid Shafiyev, Chairman of the Baku-based Centre of Analysis of International Relations, told Cyprus Mail, “people here began asking, ‘How long are we going to wait? Will it be for another 25 years?’”

In September this year, then, it seems patience finally ran out.

The current fighting stands in stark contrast, however, to the hopes of a settlement that greeted Pashinyan when he came to power in Armenia, back in 2018.

Elected in a landslide, he was widely seen as a pro-Western democrat, with his triumph heralded as Armenia’s ‘Velvet Revolution’.

Pashinyan quickly met with Aliyev and agreed a hot-line with his Azeri counterpart, along with an end to sniping on the ceasefire line and other good-will gestures.

However, “Each leader had a different expectation of what would happen next,” says Libaridian.

“Armenia sent some promising messages back then,” agrees Shafiyev, “but while Pashinyan started out as a democrat, he quickly turned into a populist and started making nationalist statements that were worse than previous regimes’.”

Amongst these was Pashinyan’s August 2019 declaration in Stepanakert – the capital of the breakaway ‘Republic of Artsakh’ – that “Artsakh is Armenia, and that’s it.”

With ‘Artsakh’ recognised internationally as Azeri territory, this was read in Baku as “against international law and the whole basis of the negotiations up till then,” says Shafiyev.

In January 2020, Pashinyan then appeared to withdraw support for the ‘Madrid Principles’ by backing popular opposition to the return of the seven adjacent territories.

Encouraged by this, on September 21, the ‘president’ of the breakaway Artsakh republic, Arayik Aratyunyan, announced that he was moving the capital of his unrecognised state to Shushi, a city in the region that was historically Azeri.

This was seen as a “provocation” by Aliyev, who added, “It’s an open insult to us. Do they think we are just going to take it?”

A week later, the fighting began.

Azerbaijan “has had a plan for retaking Nagorno Karabakh for years”, says Shafiyev. “No one is denying that. So now, operations are underway to liberate our occupied territories.”

In contrast to earlier flare-ups, too, “This time Turkey is heavily involved,” says Libaridian, “which makes it all much more dangerous.”

“Armenia could easily find itself fighting on four different fronts, if Turkey gets more involved on the ground,” says Libaridian.

Just how involved it is already remains disputed, with claims and counter-claims that Ankara has sent Syrian mercenary fighters to join Azeri ranks.

Meanwhile, Armenia is allied to Russia under the Collective Security Treaty Organisation (CSTO). Yet, “It is a self-deception for Armenia to think Russia is its friend,” says Libaridian. “Russia will let Turkey squeeze us until we ‘cry uncle’ and then Russia will come in and save us, blaming Armenia for the mess and happy to get rid of the pro-Western Pashinyan.”

For Aliyev, too, though, the stakes are now high.

“Azerbaijan is not a democracy,” says Katz. “What the consequences would be for Aliyev if he fails to gain back any territory is a big question.”

For now then, the fighting looks set to continue – with the people of Armenia and Azerbaijan continuing to bleed in their deadly ‘dark garden’.

Football games in Cyprus given green light despite ongoing doubts