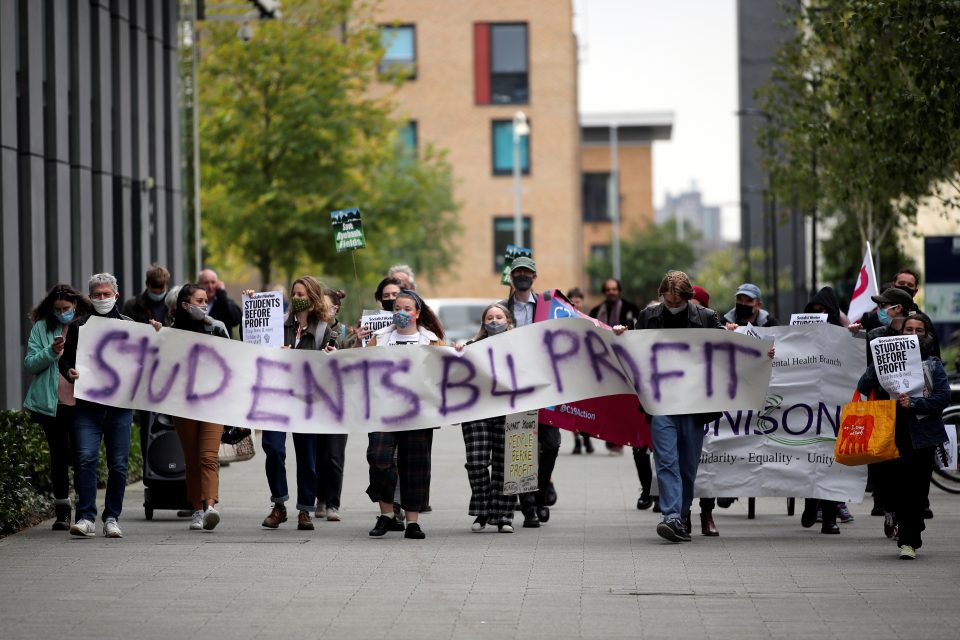 ‘They only had eight months to figure this all out, right?’

Nikolas arrived from Cyprus last Wednesday in Brighton, UK to begin his university life amid the guaranteed uncertainty of the coronavirus pandemic – a reality that came true just the following day when his flatmate tested positive.

“Apparently there was some partying, and suddenly the next day my flatmate told me that he received a message [from the NHS] in the morning saying he was positive,” Nickolas, 19, told the Sunday Mail.

He then had to go into self-isolation for 14 days along with his eight other flatmates.

Across the UK, thousands of students living in university accommodation have tested positive for the novel coronavirus – leading to prison like conditions as some students are prevented from leaving their accommodation by security guards, as was seen at Manchester Metropolitan University.

If a person develops symptoms they are told to self-isolate immediately, as well as the rest of the household. Failure to do so can result in fines of up to £10,000.

“It was very confusing at the beginning and no one had a clue what was happening, I didn’t even have time to go to the bank and get my card,” Nikolas said.

The students who do have to self-isolate are often confined to their student accommodation rooms which, on average, measure about 3x3m. To give you an idea: at Halden maximum prison in Norway each cell is 10 square metres.

Aphrodite, Nikolas’ mother described the chaotic and stressful situation after dropping off her son at university last week.

“The people at my son’s accommodation must self-isolate and he just got there so he doesn’t even know his flatmates’ names,” she told the Sunday Mail.

“It is very unlucky and unfortunate but at least I was there to be able to bring him food supplies – because otherwise what would he have done?” she asked.

Frustrated first-year Cypriot students have no choice but to sit it out in the UK. Deferring was not an option after the British government announced in June that from next September, EU students will have to pay international fees instead of the far cheaper home fees. Studying under virus conditions at 9,250 pounds a year this year is a better deal than a more typical experience next year when fees will be at least double.

But the anger is palpable. “Well, they only had eight months to figure this all out, right?” one student told the Sunday Mail.

“It’s not as if they couldn’t have seen this coming, it was entirely predictable, what did they think would happen?”

Back in May, Cambridge University announced that there would be no face-to-face lectures over the course of the next academic year.

Many are saying that universities knew full well that such a situation was likely to unfold but they pressed ahead anyway – with accusations that the lucrative profits from student accommodation was too tempting to give up.

At the end of a typical three-year undergraduate degree, the expected total cost for accommodation is £14,742 – although most only spend their first year on campus.

And that’s just the cost for accommodation: many students are saying that universities are now essentially profiteering off of a glorified streaming service.

“What’s the most expensive streaming service?” goes the joke that’s doing the rounds.

But despite mounting pressure and calls for either reductions in fees or reimbursements, it appears unlikely that students will receive such treatment.

So far, Glasgow University has been the most generous.

After an outbreak and placing their halls under lockdown, the university will refund a month’s rent, provide food parcels and clean bedding.

But what about the quality of the teaching?

Paschalis, 21, is a second-year engineering student at Edinburgh University told the Cyprus Mail that he is attending lectures on an alternating basis.

“One week we have ten lectures in-person and then next week we follow online,” he said.

But the recorded lectures posted online have a poor audio quality, Paschalis said, noting that they can be hard to follow.

“You can only socialise with people from your own accommodation and then go out to the supermarket, that’s it,” Paschalis said.

He lives in private accommodation and cannot meet with others from different households.

Many have commented that the policy effectively bans making new friends and parties – typically the lubricants which ease freshers into student life.

But not all Cypriot students have returned to Britain to continue their studies.

Natalie, 23, is a fourth-year art student at the University of Edinburgh and opted to remain in Cyprus.

“In some ways I feel lucky, for avoiding the stress and anxiety that comes with living in the UK right now,” she told the Sunday Mail.

She also cited the challenges of online meetings, however.

For others, being able to do a course entirely online has some benefits – namely saving thousands in living expenses, as they can live at home.

Constantinos, second-year psychology student at Bristol University, said that: “It is kind of unfair to pay the same prices as students in previous years since we are not receiving the full university experience.”

As his experience shows, if universities were to offer some form of discount it would be opening Pandora’s Box – as the wide variety of experiences are difficult to calculate.

As for the virus itself, he said that: “No one is really worried, you barely see people with masks on in the supermarkets even.”

Some are resigned to their fate: “We’re kind of thinking okay we’re all going to get the virus at some point and when we do it might be better so it’s all over and done with,” Nikolas said.