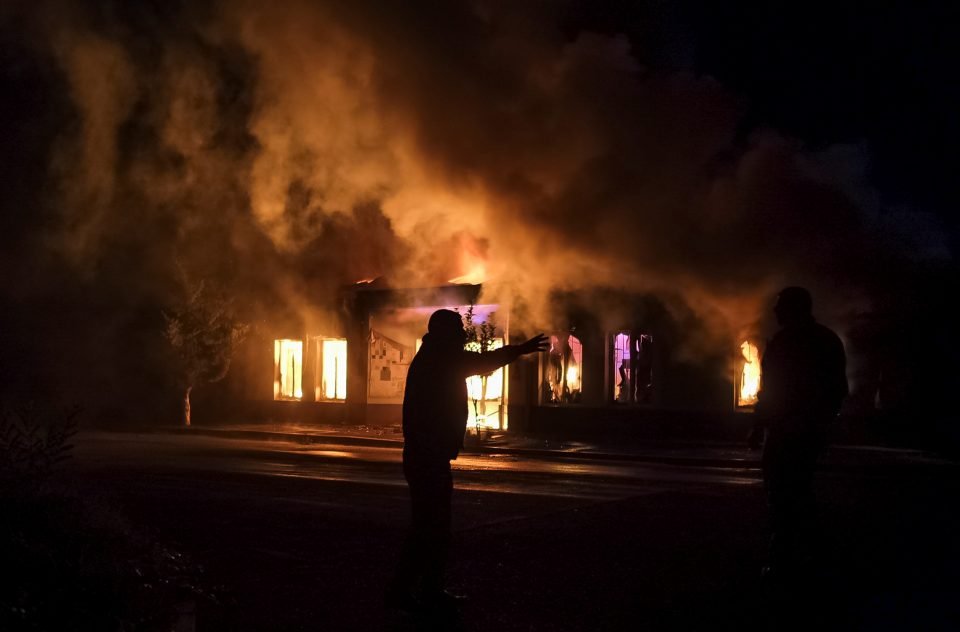 Men stand in front of a shop on fire following shelling

Azerbaijan said on Sunday that Armenian forces had fired rockets at its second city of Ganja, killing one civilian and wounding four, and threatened to retaliate by destroying military targets inside Armenia.

The developments marked a sharp escalation of the war in the South Caucasus that broke out one week ago.

Until now, the main fighting has been between Azerbaijan and Nagorno-Karabakh, an ethnic Armenian enclave inside Azerbaijan, but it now threatens to spill over into a direct war with Armenia itself.

“Azerbaijan will destroy military targets directly inside Armenia from which shelling of its population centres is taking place,” presidential aide Hikmet Hajiyev said.

He said there were also civilian casualties in another Azeri region, Beylagan, which borders Nagorno-Karabakh.

Armenia denied it had directed fire “of any kind” towards Azerbaijan. The leader of Nagorno-Karabakh said his forces had targeted a military airbase in Ganja but later stopped firing in order to avoid civilian casualties.

The conflict threatens to drag in other regional powers as Azerbaijan is supported by Turkey, while Armenia has a defence pact with Russia. Turkey’s Foreign Ministry said: “The attacks of Armenia targeting the civilians in Ganja…are a new manifestation of Armenia’s unlawful attitude. We condemn these attacks.”

Azerbaijan’s President Ilham Aliyev said on Twitter his forces had captured the town of Jabrail and several villages in what, if confirmed, would be a significant advance on the southern edge of Nagorno-Karabakh.

Armenian defence ministry spokeswoman Shushan Stepanyan dismissed the claim as “yet another fabrication”. Independent verification was not possible.

Nagorno-Karabakh reported deaths and casualties among civilians in Stepanakert and Shushi as a result of Azeri shelling.

The fighting that broke out one week ago between Azeri and ethnic Armenian forces has intensified in the past two days and spread far beyond the breakaway Karabakh region.

Ganja, with a population of 335,000, is about 100 km (60 miles) north of the Karabakh capital Stepanakert and 80 km from the Armenian city of Vardenis.

Azerbaijan has previously accused Armenia of firing into its territory from Vardenis, and Yerevan has denied it. Armenia says two civilians were killed in and near Vardenis last week by cross-border fire from Azerbaijan.

Armenia says Azerbaijan has used the airport in Ganja as a base for its warplanes to carry out bombing raids on Nagorno-Karabakh.

“Permanent military units located in the large cities of Azerbaijan from now on become the targets of the defence army,” he said.

Casualties from the past week’s fighting have run into the hundreds, although precise figures are impossible to obtain.

Armenia said the Karabakh cities of Stepanakert and Martakert were under attack by Azerbaijan’s air force and from long-range missiles. Each side accused the other of targeting civilians.

Ignoring appeals from Russia, the United States, France and the EU to call a ceasefire, the opposing sides have stepped up hostilities over the weekend, with an accompanying rise in aggressive rhetoric.

Armenia said on Saturday it would use “all necessary means” to protect ethnic Armenians from attack by Azerbaijan, and its prime minster compared the struggle with a 20th century war against Ottoman Turkey.

Azerbaijan said on Saturday its forces had captured a string of villages. Armenia acknowledged that ethnic Armenian fighters were under pressure in some places and said the situation on the ground was fluctuating.

The clashes are the worst since the 1990s, when some 30,000 people were killed. They have raised international concern about stability in the South Caucasus, where pipelines carry Azeri oil and gas to world markets