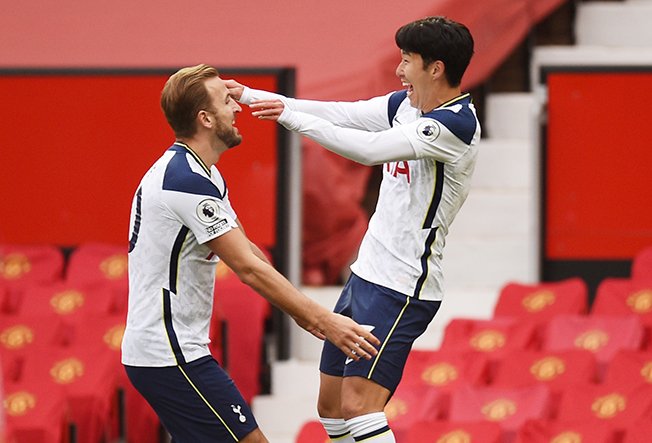 A shambolic Manchester United suffered a club record-equalling defeat in the Premier League era as they crashed to a 6-1 loss at home to Tottenham Hotspur on Sunday.

Son Heung-min and Harry Kane each scored twice for Spurs while United’s Anthony Martial was sent off in the 28th minute as Jose Mourinho celebrated a stunning victory on his return to the club which sacked him 22 months ago.

United manager Ole Gunnar Solskjaer had chosen Eric Bailly to partner Harry Maguire in the centre of defence, his first league start at Old Trafford since April 2019, but the pairing delivered a shockingly slapstick performance.

A brilliant Spurs ruthlessly exposed United’s weakness at the back and made the most of the space given to them in midfield, re-opening the question of whether Bruno Fernandes and Paul Pogba can play together for United in a three-man set-up.

Yet what will also please Mourinho is the fact that his team were simply stronger, faster and better organised than his former club.

It started well for United with Fernandes scoring a second-minute penalty after Martial was brought down by Davinson Sanchez.

The lead, however, lasted just two minutes, as Spurs took advantage of hesitant defending from United.

Maguire’s poor header went back into his own box and then Luke Shaw was bundled off the ball by Erik Lamela with Tanguy Ndombele firing home the loose ball.

Three minutes later and United were caught out again with a quick free kick from Harry Kane sending Son through and the South Korean’s pace and composed finish put Spurs into the lead.

It got much worse for United when Martial was sent off in the 28th minute after retaliating to an elbow from Lamela with a push in the Argentine’s face.

Remarkably Lamela was not also sent off by referee Anthony Taylor, who did not make use of the pitchside monitor to evaluate his decision.

It took just two minutes for Spurs to ram home their numerical advantage. Son squared to Kane and the Spurs striker slotted home with United’s defence all at sea.

Son then added his second, turning in a Serge Aurier cross at the near post. The last time United had conceded four first-half goals at home in a league match was in 1957 — also against Spurs.

Solskjaer made a double switch at the break, taking off Fernandes and Nemanja Matic and bringing on Fred and Scott McTominay but that did little to change the pattern of the game.

Serge Aurier made it 5-1, six minutes after the interval, finishing off a smart passing move with a drilled effort into the far corner after gliding past an inattentive Pogba.

Kane went close to a sixth but David De Gea did well to keep out a fierce drive at the near post before the Spurs striker wrapped up the scoring from the spot, after a wild challenge from Pogba on Ben Davies.

United lost 6-1 to Manchester City in October, 2011, their previous worst defeat in the Premier League era.

Ancient artefacts claimed to be from the future – now explained

Omonia move into second place with win over AEL, Apoel stumble against Ermis