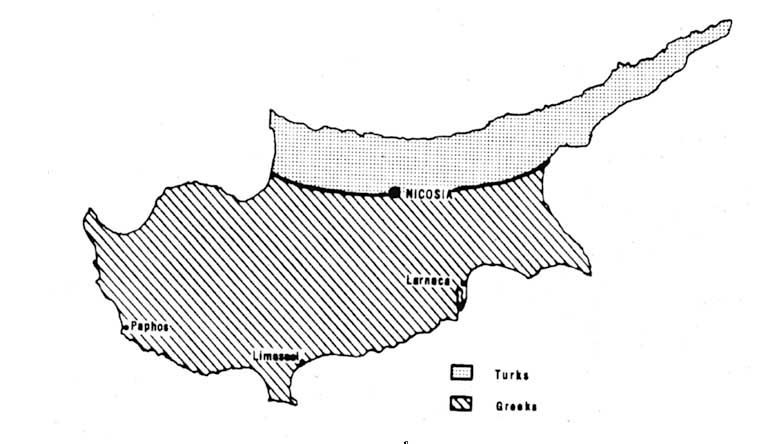 Turkey isn’t going anywhere, compromise is the only way forward

A few days ago, one of my readers sent me a classified CIA report dating back to June 1964 and declassified in 2019. The report, under the title “The Separation of the Greek Cypriot and the Turkish Cypriot Populations” simply confirmed what was already widely known: that Turkey was seeking the partition (taksim) of Cyprus ever since the Greek Cypriot leadership alienated the Turkish Cypriots with its clumsy handling of the Cyprus issue and Turkey got involved.

The map set out below depicts what was known as Turkey’s “Plan B”, which was her ideal solution of the Cyprus problem. The map has striking similarities with today’s facts on the ground, except that the land now occupied by Turkey is much larger than what it considered in 1964 as an “ideal” solution. Then it was confined to 21 per cent of the total territory.

This percentage clearly highlights the extent of the damage that was caused by certain insane, self-proclaimed “patriots”, who staged the 1974 treacherous coup d’etat and thus widely opened the door for Turkey to invade Cyprus.

Unfortunately, these same pseudo-patriots – possibly because they have a guilty conscience and refuse to acknowledge the extent of the damage they had caused – continue even now their struggle against any form of reunification, on the strength of the flimsy argument that Erdogan’s Turkey cannot be trusted to honour her commitments under an agreement that would reunite Cyprus, within the Guterres Framework and that of UN Security Council resolutions.

But what exactly are our “country-loving” compatriots trying to say? Would they prefer to negotiate a settlement with Bϋlent Ecevit, who launched the invasion of Cyprus, or with Tansu Çiller, who provoked the Imia rocks crisis in 1996? Turkey is the country it is, and there is no way it can be moved to the location currently occupied by Switzerland, in exchange for Switzerland being relocated to Turkey. Turkey is there and she will remain there, within a breathing distance of Cyprus, and so will remain all those Greek islands scattered along the Turkish coast, discouraging every sensible Greek from getting involved in a military conflict with Turkey.

We were led into such a conflict in 1974 by the “super-patriots” and we suffered the inevitable consequences: thousands of needlessly dead and missing civilians and conscripts and almost half of Cyprus under foreign occupation; a situation that remains unchanged 46 years later.

The road to reconciliation with the Turkish Cypriots, within the framework of EU guarantees, is the only road which does not lead to a dead end. Of course, it is not a road strewn with flowers. It is a process which entails compromises and, above all, a genuine commitment to communicate and cooperate, a genuine readiness to respect the diversity of each and every citizen.

The voices saying that we have had enough are multiplying. The refugee cries of anguish and despair are heartbreaking. The theory that it is a mere question of time before all the original refugees emigrate to heaven, thus solving the problem once and for all, is macabre.

As I have repeatedly stated in the past, the setting of goals is the easy task; attaining those goals is the difficult part. Unfortunately, certain vocal Greek Cypriots are confined to setting goals and leave the difficult task of attaining them to others. These are the “fathers of the nation” who in reality are full of defeatism and lack courage. They love fiestas, regularly attend national memorials and are fans of parades. They are people who flourish when given the opportunity to acquire positions of convenience that generate significant tangible benefits.

The EU leaders’ summit finished in the early hours of Friday. Sanctions were imposed on Belarus. No sanctions were imposed on Turkey. There is little doubt that Cyprus’ approach in attempting to force all the EU member states to agree to impose sanctions on Turkey by threatening to veto sanctions on Belarus, was wrong. The EU leaders have taught us a lesson: when handling matters of vital national importance, one should focus on the issues that really matter and not on trivial matters, such as getting a name or two on a list of foreigners that are unwelcome in the EU.

We are entering a critical phase in the process of seeking a resolution of the Cyprus problem. We need the maximum help and support of the European Union and this is what we should be focusing on – behind the stage and not in front of the cameras. The Europeans are ready and able to help us. We should not alienate them.

In this process, we need to convince them that we are determined and committed to achieving the reunification of Cyprus. Our president, in both his address to the UN General Assembly and in his message for the 60th anniversary of the Republic, focused almost exclusively on attacking Turkey and President Erdogan, thus conveying the impression that hitting Turkey is our primary goal.

I would respectively suggest that this is not the right message. A humble approach, transmitting the message that all we are interested in is reuniting our homeland, might have been more effective.

Yavuz drillship said to be moving out of Cyprus’ EEZ