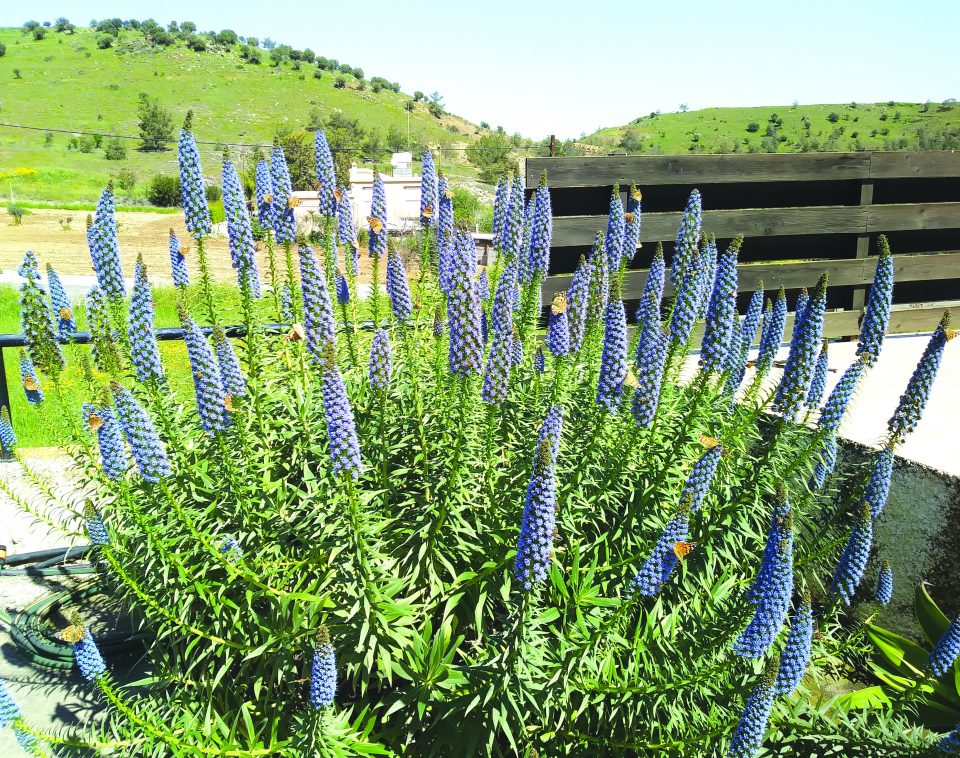 October a time to reassess after summer’s losses

Have you been waiting for October to arrive? I certainly have, as at last I can get down to some serious gardening, having pottered about for several months just weeding, dead-heading and watering. As a result of the terribly hot summer we have just had, I have had to plan some changes in the garden. Several plants and shrubs succumbed to the heat including some newish ‘Gold Crest’ trees, as well as some well-established polygala bushes which I thought should have been accustomed to the heat by now. Their demise will leave big gaps and much thought is needed for their replacements. Echium webbi has suffered in the heat too. This short-lived shrub which thrives for perhaps 4 or 5 years has shared its wonderful butterfly-attracting blooms with us for ages it seems. I always take cuttings knowing its shortish life, so thankfully have some maturing now to plant when it is cooler.

Some plants have thrived and my wisteria had bloomed and bloomed all summer, scenting the air with its lovely perfume, despite only being watered every second day and no feeding at all. I have come to the conclusion that wisteria, rather like clematis, like to have their roots in the shade and heads in the sun. Datura, sown from my own seeds earlier in the year, has surpassed all expectations and flowered and flowered. This shrub doesn’t like to be exposed to full sun and does need daily watering, but its night-scented perfume attracts the moths to fertilise the flowers.

The question on everyone’s mind must be will we have some good soaking rain this autumn and winter. The bulk of our rain begins to come from November onwards but perhaps we will have a shower or two before then, so that we can make a start in the garden. The ground is very dry deep down and it is going to take more than a few showers to do any good at all after those very hot summer temperatures. Our climate here is classified as ‘dry summer subtropical’ and if you compare our rainfall with other areas in the Med, then we are very poorly off. Cyprus as a whole is supposed to have an average 402mm (15.83 inches) but that depends on where you live of course. At the western end of the Med, rainfall can be as much 450-650mm in Majorca and 871mm in Naples. Only Egypt is worse than us with 200mm! Again depending on where you live here, October average temperatures can be between 27C-28C, so hopefully they won’t exceed them!

WHAT TO IN THE GARDEN IN OCTOBER

Whilst we wait for the rain there are all sorts of jobs to be getting on with. Choosing and planting up your spring bulbs is one job which can’t wait forever, or the best ones will have gone before you get to the garden centre. Last year I tried a narcissus called ‘Salome’ which was very attractive and I hope to plant some more this autumn. However, if the ground is dry bulbs will not make roots to stabilise themselves in order to produce the leaves and flowers for the spring. Leave planting tulips until next month as they flower later than other bulbs and can wait a while longer.

I haven’t seen chasmanthe corms in the shops, which is a crocosmia look-alike, known locally as monbretia and flowers in the spring, so you may have to beg a few corms from friends. They should be dug up every two years or so after they have flowered, cleaned and replanted at about 10cms. They look much better if planted towards the back of the border in groups. They don’t need watering during the summer when they are dormant, and once we get some rainfall their lance shaped leaves will start to emerge from beneath the soil.

You may find that any freesias that have been left in the garden or pots may be sending up new leaves long before the gorgeously perfumed flowers are due to appear. This is also a habit of ornithogalum, ‘Star of Bethlehem’, which also has a lovely perfume. By the time the flowers appear the foliage is a messy heap of leaves.

After the first drop of rain, aeoniums, which have been sustained during the summer by the moisture contained in their stems and leaves from last year’s rains, will be looking rather droopy, but should start to fill out and straighten up now that it is cooler. Come spring time their enormous yellow flower heads will burst into bloom atop the long stems, to compete with those spring bulbs that you have just planted.

Garden centres are still full of annuals, which you can plant as they will give you colour in your pots until at least Christmas. You can do the same with pelargoniums (geraniums), as well and use some of the bits you cut off for cuttings. ‘Pot Mums’ are in right now in all their various colours and will brighten any patio or flower bed. If you plant them outside they will likely come up again in the spring and you will be able to take cuttings from them too, giving you lots of new plants.

Pomegranates and pecans should be ready this month. Both are very good for you and are used for many purposes. Crows like pecans as well and know exactly when the outer shell will open just a tiny bit. They will make dawn sorties over your trees and make off with the choicest nuts prised out of the shell. Crop them as they are ready and shell them, (use latex gloves or they will stain your hands), letting them dry in time for Christmas. However much you enjoy pomegranates, take care when eating them, as the juice can stain if you spill any on your clothes.

One way of having fresh salads even if you live in an apartment is to plant up lettuce plugs in a planter or trough. They will grow quickly and you only need pick enough leaves for a meal and leave the plant to make more. If you intend to sow broad beans do make sure that the soil is damp before you plant them. Some people like to start them off in small pots but I prefer to soak them first before planting. Given some winter rainfall the beans should be ready about February or March, long before there are any blackflies about to be a nuisance.

Other winter vegetables you may like to try are kohl rabi, broccoli and cauliflowers. I don’t let mine get too big, much preferring them to be small and tender. You could just get a crop of new potatoes for Christmas if you act now, but it means that you will have to let some old potatoes sprout in your vegetable basket, as seed potatoes are not available here. It will take between about ten to twelve weeks to give you potatoes for lunch. If like mine, your herbs were burnt to death during the heat, you could replace them now. At this time of year it is better to keep them in pots, so that when winter comes along you can bring them indoors or into a more sheltered spot.

Plant of the Month: Narcissus papyraceus

These lovely early bulbs, known locally as ‘paperwhites’, are natives of the Mediterranean region and should be available in garden centres this month. Paperwhites, the strongest-scented of the narcissus family, do not require chilling to promote bloom and will begin to grow as soon as they are planted, with flowers appearing in 3-4 weeks. Bloom time is probably variable when the bulb is planted outdoors and they can flower from late autumn into spring. The mid-green stems grow upright and can bear up to 10 pure white flowers. They can reach a height of around 30cm, though this can vary according to local conditions. If you wish to grow them outdoors then plant them as you would an ordinary narcissus bulb in a sunny spot with well-drained soil about 2-3 times the height of the bulb. They look quite magnificent in great drifts. They should flower year after year once they are settled in.

Some people like to grow them indoors to give them as gifts at Christmas time. They can be grown in soil; in water or in pebbles and water and it is fun to see their roots begin to show. Choose a tall glass and pour some pebbles or glass stones into the bottom, up to between 1-2 inches. Add water to just barely reaching the top of the pebbles and put the bulb on top of them. Keep your eye on the water and make sure that it is just barely reaching the top of the pebbles but do not let the bulbs become wet! They are fast growers, so stand back and watch them grow!

Perils of wealth transfer to children