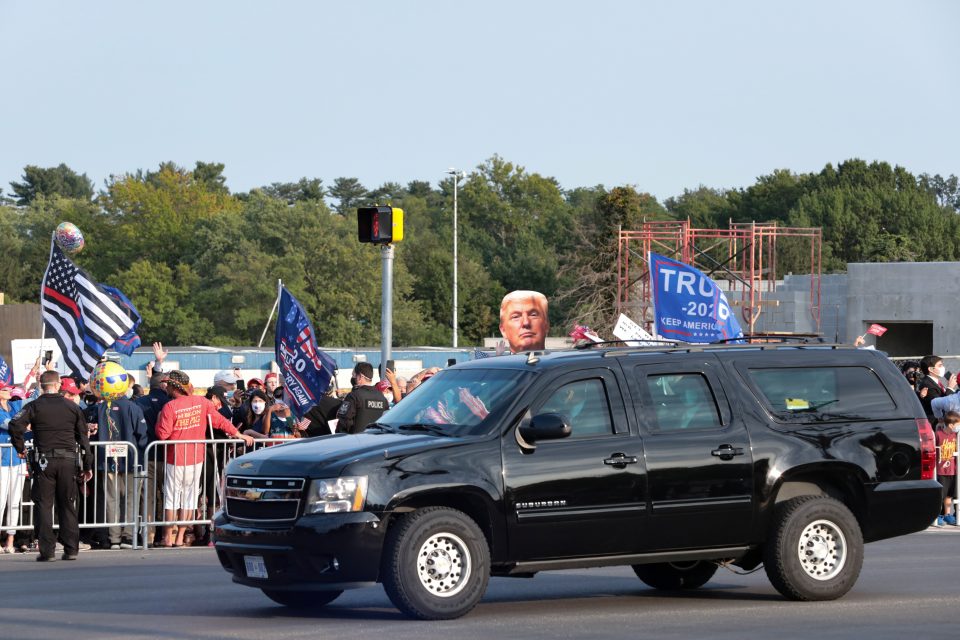 U.S. President Donald Trump rides by in the presidential motorcade in front of the Walter Reed National Military Medical Center, where he is being treated for the coronavirus disease (COVID-19) in Bethesda, Maryland, U.S. October 4, 2020. REUTERS/Cheriss May

By Steve Holland and Andrea Shalal

US President Donald Trump is due to leave the US military hospital where he is being treated for Covid-19 late on Monday night Cyprus time, adding that he felt “really good”.

“I will be leaving the great Walter Reed Medical Center today at 6:30 PM Feeling really good! Don’t be afraid of Covid. Don’t let it dominate your life. We have developed, under the Trump Administration, some really great drugs & knowledge. I feel better than I did 20 years ago!” he said on Twitter.

His physician, Dr Sean Conley told reporters that Trump has met or exceeded all standard hospital criteria to be discharged, and while he is not yet out of the woods, he was able to go home.

“Over the past 24 hours … he’s met or exceeded all standard hospital discharge criteria,” Conley told a news conference, saying it had been more than 72 hours since Trump‘s last fever and that his oxygen levels were normal.

“Though he may not entirely be out of the woods yet, the team and I agree that all our evaluations, and most importantly, his clinical status, support the president’s safe return home, where he will be surrounded by world-class medical care 24/7,” Conley said.

Trump on Monday had begun a fourth day of treatment for Covid-19 at the military hospital outside Washington.

Trump‘s announcement of his diagnosis landed like a bombshell on Friday, some 48 hours after his first presidential debate with Democratic challenger Joe Biden, highlighting the uncertainty that has marked a highly unusual campaign during a deadly pandemic.

Doctors at medical centre in Bethesda, Maryland, are treating Trump, 74, with a steroid, dexmethasone, that is normally used only in the most severe cases. Trump was running a high fever on Friday and had been given supplemental oxygen after his blood oxygen levels dropped, Conley, the White House physician, said on Sunday.

White House Chief of Staff Mark Meadows told Fox News earlier on Monday said that he was optimistic Trump would be discharged.

Meadows also defended the decision to allow Trump to leave his suite briefly on Sunday to take part in a drive by to greet supporters outside the hospital. Critics said the action put Trump‘s security officers at risk.

Trump will need to continue treatment as he is still undergoing a five-day course of an intravenous antiviral drug, remdesivir. The normal quarantine period for anyone testing positive for the novel coronavirus is 14 days.

Trump frequently downplayed the threat of the pandemic which has now infected 7.4 million Americans and killed more than 209,000. In recent days, he released a series of videos to reassure the public he is recovering from the disease caused by the virus.

On Monday, his Twitter account released a stream of more than a dozen messages encouraging Americans to vote for him in the November election, including posts that read “LAW & ORDER. VOTE!” and “RELIGIOUS LIBERTY. VOTE!”

The coronavirus outbreak around Trump grew on Monday when White House press secretary Kayleigh McEnany said in a statement she had tested positive for the virus and would begin the quarantine process. McEnany is a well-known figure at the forefront of the White House’s often combative dealings with the media.

A Reuters/Ipsos poll released on Sunday showed Trump trailing Biden nationally by 10 percentage points. About 65 per cent of Americans said Trump would not have been infected had he taken the virus more seriously.

He is under fire for a statement that he met with soldiers and first responders at the hospital – moves that potentially exposed even more people to the virus, as well as the drive-by on Sunday.

“Every single person in the vehicle during that completely unnecessary presidential ‘drive-by’ just now has to be quarantined for 14 days,” James Phillips, an attending physician at the Walter Reed facility. “They might get sick. They may die. For political theatre.”

The return to the White House might help Trump project a sense of normalcy in his difficult battle to win re-election on Nov. 3.

US stock markets were trading higher on Monday amid hints of Trump‘s potential release and signs of progress with a new fiscal stimulus bill. Wall Street’s main indexes slumped on Friday after Trump‘s announcement that he had Covid-19.

Biden, 77, has tested negative for the disease several times since sharing the debate stage with Trump. He is due to resume in-person campaigning on Monday in Florida, where polls show a tight race in a crucial election battleground.

Trump‘s wife, Melania, who also tested positive for Covid-19, said in tweet that she would continue to rest at home in the White House.

Three Republican US senators, two of whom were at a Sept. 26 White House public event where Trump introduced his Supreme Court nominee Amy Coney Barrett, have tested positive for the coronavirus as have others who work in the White House.

There is growing concern about a fundraising trip that Trump made on Thursday to his golf club in Bedminster, New Jersey, which was attended by about 100 people,

“A group of folks from out of state coming in knowingly having been exposed to someone who is Covid-positive is really, really frustrating, it’s complicated,” New Jersey Governor Phil Murphy told CBS’ “This Morning” show.

“The thing that should have happened is nobody should have come to New Jersey. That trip should have been cancelled,” said Murphy, who added that the state, which was one of the early epicentres of the US pandemic, was now conducting contact-tracing for those who attended the fundraiser.

Britain to cover COVID-19 vaccine side effects under damages scheme