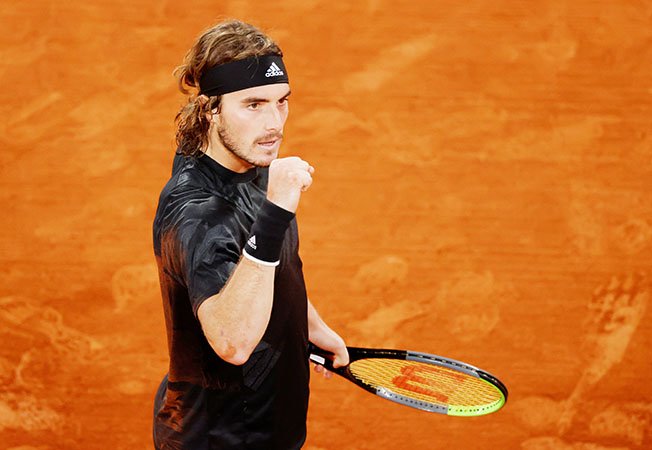 Stefanos Tsitsipas reached the quarter-finals of a Grand Slam for the second time as he brushed aside Grigor Dimitrov 6-3 7-6(9) 6-2 at the French Open on Monday.

The Greek fifth seed was solid on serve throughout and played neatly as his Bulgarian opponent lost focus at crucial times under the roof of Court Philippe Chatrier.

Last year’s ATP Finals winner Tsitsipas, whose best result at a major is reaching the Australian Open semi-finals in 2019, will next face Russian 13th seed Andrey Rublev, with a last-four clash with world number one Novak Djokovic looming.

“I felt comfortable. Playing Grigor… he can be unpredictable so coming into the match you don’t know what to expect,” said Tsitsipas.

“We have a similar style of play so I knew if I could be as aggressive as possible and use my forehand and my serve I knew my opportunities would come.

“My aggressiveness on return games and my focus on important points made the difference.”

The 22-year-old raced to a 3-0 lead in the first set. Eighteenth seed Dimitrov went up a gear at 5-3, only to see three break points saved by Tsitsipas, who served it out to take the set.

“The tiebreak was where all the money went. I tried to take it point by point, I showed a lot of discipline. It was a very responsible win in the second set,” said Tsitsipas, who had a medical time out for an irritated left eye.

Being two sets down looked too big a mountain to climb for Dimitrov, who buried a volley into the net to hand his opponent the first break in the third set.

The black-clad Greek went on to wrap up a straightforward win on Dimitrov’s serve.

In the women’s draw, Czech left-hander Petra Kvitova reached the quarter-finals for the first time in eight years as she overpowered China’s Zhang Shuai 6-2 6-4.

On yet another chilly day in the French capital, seventh seed Kvitova’s superior firepower proved decisive as she posted her fourth successive straight-sets victory.

With so many big names already out, twice Wimbledon champion Kvitova will sense a golden title opportunity as she heads into a quarter-final against unseeded German Laura Siegemund.

“It was a great one today for sure,” said Kvitova, who returned to action at the 2017 French Open following a knife attack six months earlier that left her with career-threatening hand injuries.

“To be back on the same court that I made my comeback and to make the quarter-final is something I didn’t expect. I’m trying to play faster here and play aggressive off the returns,” she told Eurosport.

Summer clings on, 38C on Tuesday