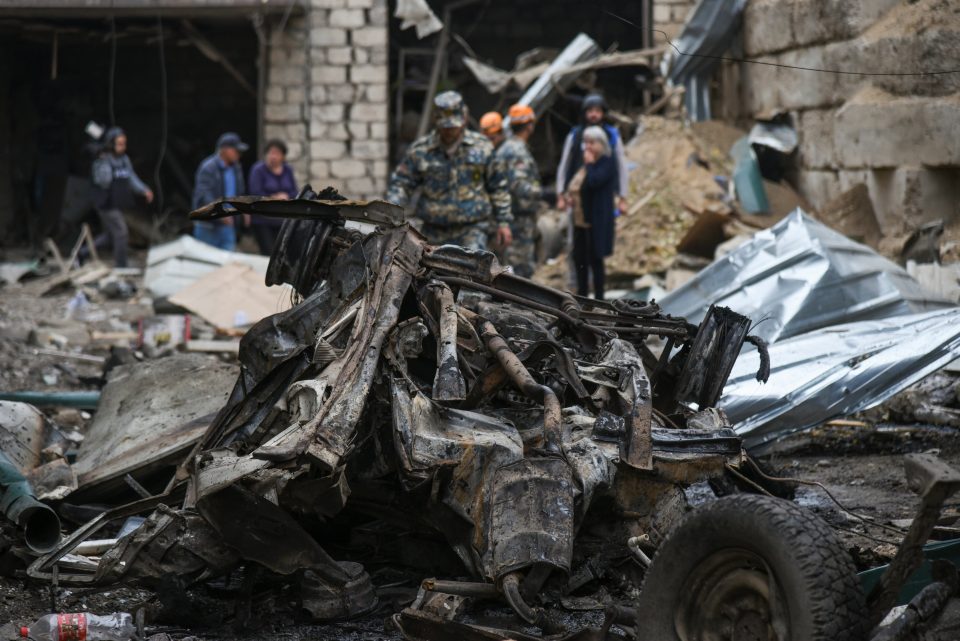 Aftermath of recent shelling during the military conflict over the breakaway region of Nagorno-Karabakh in Stepanakert October 4, 2020. David Ghahramanyan/NKR InfoCenter/PAN Photo/Handout via REUTERS ATTENTION EDITORS - THIS IMAGE HAS BEEN SUPPLIED BY A THIRD PARTY. MANDATORY CREDIT.

Syrian President Bashar al-Assad accused Turkish counterpart Tayyip Erdogan of being the main instigator in the deadliest fighting between Armenian and Azeri forces for more than 25 years.

In an interview published on Tuesday that is likely to exacerbate international frictions over the clashes in the South Caucasus region, Assad also said militants from Syria were being deployed to the conflict area.

Turkey has denied involvement in the fighting in and around Nagorno-Karabakh, a mountain enclave that belongs to Azerbaijan under international law but is governed by ethnic Armenians, and has dismissed accusations that it sent mercenaries to the area.

But Assad told Russian news agency RIA: “He (Erdogan) … was the main instigator and the initiator of the recent conflict in Nagorno-Karabakh between Azerbaijan and Armenia.”

Reiterating accusations first levelled by French President Emmanuel Macron that Turkey has sent Syrian jihadists to fight in the conflict, Assad said: “Damascus can confirm this.”

Assad appeared, however, to provide no evidence for his allegation. Ankara did not immediately respond but has described similar accusations as part of attempts by Armenia to create “dark propaganda” about Turkey.

The fighting that broke out on Sept. 27 has increased concern that a wider conflict could be triggered, dragging in Turkey, which has expressed solidarity with Azerbaijan, and Russia, which has a defence pact with Armenia.

Azerbaijan and Armenia have accused each other of starting the fighting – the latest in long-running conflict over Nagorno-Karabakh that is closely watched abroad partly because of its proximity to pipelines that carry Azeri gas and oil to Europe.

More than 250 people have been reported killed – and many more are feared dead – in clashes that have been fought with artillery, drones and tanks. The sides have also posted footage of devastated and burning buildings, and people taking cover during heavy bombardments.

Azerbaijan says Azeri cities outside Nagorno-Karabakh have been struck, and Armenia has accused Azerbaijan of targeting densely populated areas. Both deny targeting civilians.

“After the calls of the international community to immediately stop military actions in Nagorno-Karabakh conflict zone, the line of conflict was relatively calm,” Defence Ministry spokeswoman Shushan Stepanyan said.

Armenia’s foreign ministry issued a new call for an immediate ceasefire and said “any attempt of military solution will be resolutely prevented.”

Ceasefire appeals by the United States, Russia and France have failed to halt the fighting. The three countries have for years led mediation efforts in a conflict that broke out as the Soviet Union collapsed and has killed about 30,000 people. U.S. Deputy Secretary of State Stephen Biegun spoke separately to the foreign ministers of Azerbaijan and Armenia on Monday and urged the sides to agree to a ceasefire immediately and resume negotiations.

The United States, Russia and France issued a new condemnation of the violence on Monday.

Turkish Foreign Minister Mevlut Cavusoglu was due to hold talks with Azeri President Ilham Aliyev in Baku on Tuesday.

Officials in Nagorno-Karabakh said on Monday 223 of its servicemen and 19 civilians had been killed since the latest fighting began. Many more people have been wounded.

The Azeri prosecutor’s office said on Monday 25 Azeri civilians had been killed since fighting began. Azerbaijan has not provided details of military casualties.

Azerbaijan did not immediately issue an update on fighting on Tuesday. But its foreign ministry accused Canada of “double standards” over a decision to suspend exports of some military technology over allegations the equipment was used by Azeri forces in the Nagorno-Karabakh conflict.