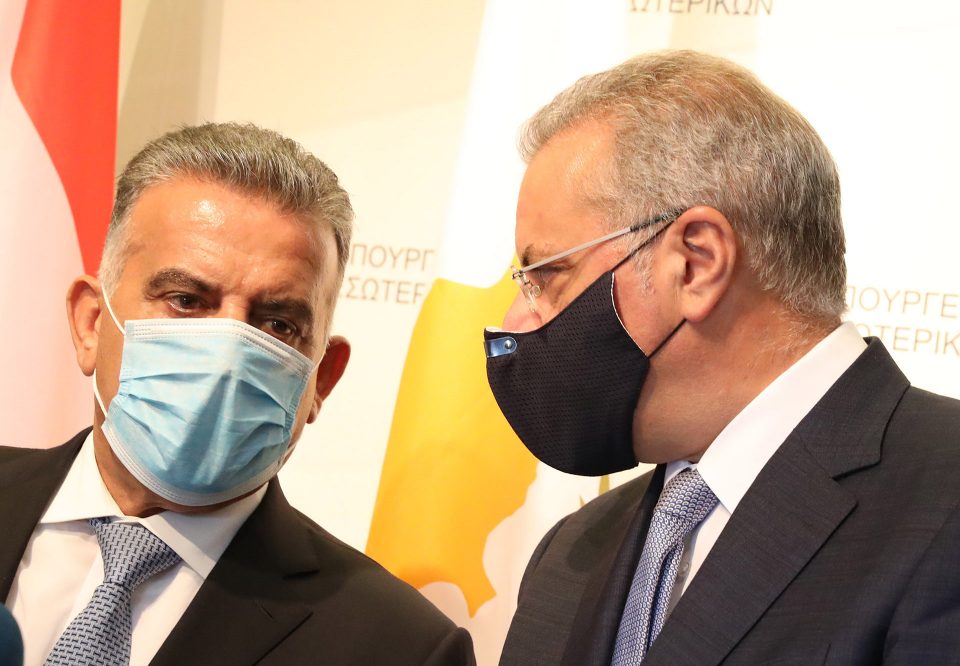 “Our countries have been cooperating for several years and we will continue doing so,” Nouris said after the meeting.

“We want to send out a clear message that we will not let traffickers exploit the current situation in Lebanon by bringing people into our country illegally.”

After a number of migrants from Lebanon who headed to Cyprus were returned the government invited Ibrahim to discuss further strategies to tackle the ongoing issue.

A blast at the port of Beirut that left hundreds of thousands homeless exacerbated a critical situation in Lebanon which has seen its economy collapse, leading to a surge in people opting to try and start a new life in Cyprus.

A report by Human Rights Watch released last week claimed that, in the first week of September migrants were threatened by coast guards, and vessels circled them at high speed, swamping their boats and abandoning them at sea without fuel and food.

The interior minister said that the allegations of violence used against the migrants are completely unfounded.

“I do not think any act of violence ever occurred. We acted in compliance with all the provisions of the law and, of course, respecting EU directives,” he said.

He added that the agreement between the two countries stipulates that boats proven to have left Lebanon illegally will be swiftly turned away and sent back to where they have departed from.

Ibrahim said Lebanese authorities will patrol all beaches in the country more closely to avoid having boats heading to Cyprus illegally.

“We will also try to identify all illegal migrants who will be returning to Lebanon and bring the traffickers to justice,” he said.

Ibrahim added that the current situation in Lebanon, a country plagued by a devastating economic crisis before the deadly blast, is forcing people to flee in search of a better future.

Lebanon also has a high population of refugees to deal with; according to the UN High Commissioner for Refugees (UNHCR), the number of illegal migrants in Lebanon stood at over one million people as of the end of last year.

The figure does not, however, include refugees who are not officially registered with the UNHCR.

In 2002, Lebanon and Cyprus signed a bilateral agreement to cooperate in combating organised crime, including illegal immigration and human trafficking.

During Tuesday’s meeting it was agreed that the two countries will now cooperate more closely to prevent illegal arrivals and, when needed, they will ask for further help from the European Border and Coast Guard Agency, Frontex.

Nouris was also formally invited to visit Beirut by Ibrahim, an invitation said he will honour as soon as conditions allow.