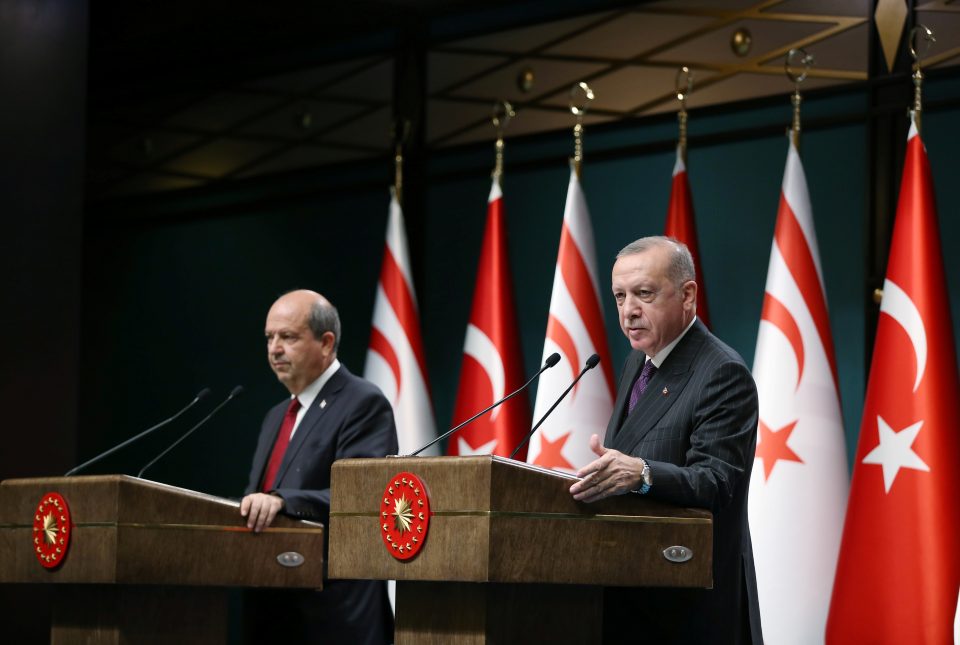 “God willing, we will start to use the Maras beach on Thursday morning together with our people,” Tatar said, using Varosha’s Turkish name.

“We hope that the whole of Maras is opened to use after ongoing work is completed by respecting property rights,” Erdogan added.

According to Turkish Cypriot media, Tatar said the opening the coastal zone was the first concrete step on their road map for Varosha.

Erdogan, congratulated all the Turkish Cypriot people “for this beautiful development.”

“We know this decision will disturb many,” Erdogan said.

Yeni Duzen reported that Erdogan also said that there is no private property in the area to be opened, therefore property rights are respected.

President Nicos Anastasiades and the government condemn the decision of Turkey and their “puppet” in the north Ersin Tatar, government spokesman Kyriacos Kousios said.

He said the decision to offer entry to the seafront of Varosha is nothing more than a “campaign fiesta” by Tatar and Turkey on the eve of elections in the north for Turkish Cypriot leader, which will be held on Sunday.

“This threatening and illegal action of Turkey and its puppets in Cyprus will be reported to the Security Council of the United Nations, the European Union, and all other international fora as an action that violates international law and the resolutions of the UNSC, and is against the latest conclusions of the EU Council,” he said.

Following a National Council meeting with the leaders of other parties and previous presidents, Kousios said they all unanimously condemned Turkey’s decision, “in the harshest of manners.”

The council also reiterated the Greek Cypriot side’s readiness to enter a dialogue for a solution to the Cyprus problem, but not under threat or with faits accomplis.

Criticism also came from all of Tatar’s opponents in the upcoming election, with Turkish Cypriot leader Mustafa Akinci saying the decision on Varosha is a campaign ploy, “which puts the Turkish Cypriot people in a difficult position on the international stage.

“I have a duty to clarify that to make an important issue, such as Varosha – which is included in the responsibilities of the presidency – a campaign subject shortly before the elections, is very wrong,” he said.

He said the agreement does not open Varosha under Turkish-Cypriot administration as had been agreed at ‘cabinet’ sessions in the north, nor does it deal with the property issue.

“I had stated many times in the past that such a serious issue to be the subject of an election campaign would only bring harm and that is exactly what happened,” he said.

UN Secretary-General Antonio Guterres said there is a need to avoid any unilateral actions that could trigger tension in Cyprus.

“The Secretary General is concerned by the announcement made today on the opening of the beach/coast line of Varosha and recalls that the position of the United Nations on Varosha remains unchanged and is guided by relevant Security Council resolutions,” UN spokesman Stephane Dujarric said.

“The Secretary-General stresses the need to avoid any unilateral actions that could trigger tensions on the island and undermine the return to dialogue or the future success of talks. He calls on all parties to engage in dialogue in order to resolve their differences and reiterates his readiness to bring the parties together,” Dujarric said.

The EU’s top diplomat Josep Borrell also condemned the decision to open part of Varosha just a week after the EU called on Turkey to respect international law and calm tensions in the area.

“The EU is deeply concerned about today’s announcements and developments related to Varosha,” he said.

“What is urgent now is to rebuild trust and not to create greater divisions,” Borrell said.

Kibris Postasi reported that Tatar, prior to his departure told close associates that he had a great surprise in store.

According to reports, the Cyprus government was anticipating such a move and has already taken a series of steps.

UN Security Council resolution 550 (1984) considers any attempts to settle any part of Varosha by people other than its inhabitants as inadmissible and calls for the transfer of this area to the administration of the UN.