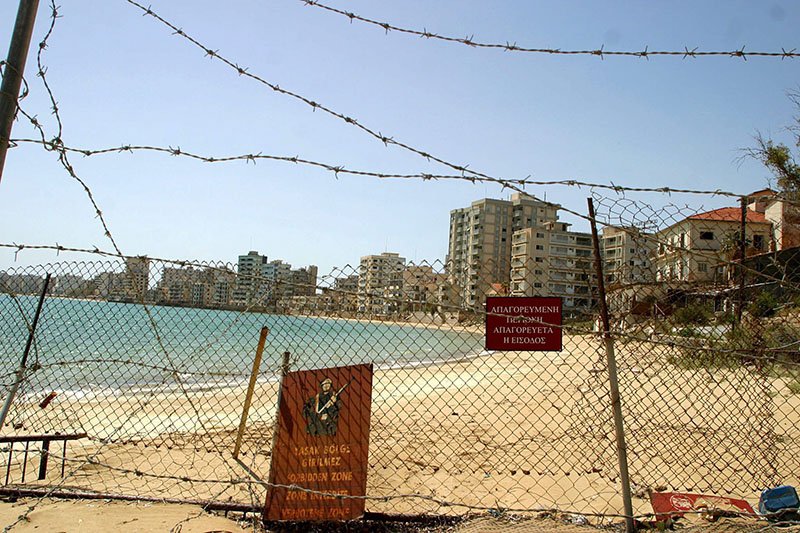 Turkish Cypriot workmen have set up an entry point to Varosha seafront in the fenced-off part of the ghost town, Turkish media reported on Wednesday, posting a video of the work being carried out.

It is from that point people will be granted entry into the area. Bayrak reported that access will be permitted from 11am on Thursday.

Kibris Postasi posted a video on social media, showing a crane placing a portable cabin by a gate which reportedly would act as a checkpoint. Police officers were present.

The Turkish Cypriot regime announced on Tuesday it would open the seafront to the public on Thursday, sparking protests by the Cyprus government which has taken the issue to the UN Security Council.

The EU’s foreign policy chief, Josep Borrell, has said that reopening of the area, which is closed under the UN ceasefire agreement, was “a serious violation”.

“It will increase tensions and make it more difficult to reach an agreement on a particularly difficult situation for all of us in the Eastern Mediterranean,” he said.

The Russian foreign ministry also said it was seriously concerned by the plans to reopen the Varosha beach, calling the decision to do so unacceptable.

EU leaders are expected to review Turkey’s actions on Varosha in December.

“We are watching the facts and we are stating what we think it is going on,” he said, adding that the EU’s position was very clear, both in Tuesday’s statement and in the European Council conclusions from last week.

“What the EU is now waiting for are signs that would allow the leaders, when they return to the issue of relations with Turkey in December, to evaluate the situation and to say: Was there progress, a constructive approach or was there something against the constructive spirit and dialogue? And based on this review they will decide what the next steps will be.”

Manfred Weber, head of the European People’s Party, which is the largest grouping in the European Parliament, also denounced the planned reopening of parts of Varosha.

“Erdogan intends to open and illegally settle the fenced off town of Varosha, a town taken from Cyprus in 1974,” he wrote on Twitter on Wednesday. “It would be a blatant violation of UN security council resolutions and simply illegal. Varosha should be returned to its rightful owners now!”

The only hope of preventing further provocative actions and violations in Varosha would be through resuming the Cyprus talks, Famagusta mayor Simos Ioannou said on Wednesday.

Speaking to the Cyprus News Agency, Ioannou also said that the move, approved by Turkish President Erdogan and announced by Turkish Cypriot ‘prime minister’ Ersin Tatar in Turkey, was done to aid Tatar in his election campaign.

But Ioannou stressed that the move was taken, in part, to tank the Cyprus talks. He also stated that reopening the beach is a step towards the complete resettlement of Varosha.

“In the case where Turkey’s favoured candidate is ‘elected’, then there will certainly be a continuation of such [resettlement] moves,” he said.

“They will proceed with opening larger areas of the beach, creating infrastructure and facilities while finding further excuses to keep on expanding,” Ioannou said.

Some had hoped that the Cyprus talks would resume soon after the ‘elections’ in the north on Sunday, however many see the latest move as a major obstacle towards renewing such efforts.

“If talks do not take place either now or in the near future there will certainly be a division and in such a case then the whole of Varosha will be lost,” Ioannou said.

There are also plans for demonstrations to be held at the Dheryneia checkpoint on Thursday afternoon.

Government Spokesman Kyriacos Kousios said that Anastasiades will also raise the Varosha issue at the next European Council meeting.

He also noted that government has already reached out to the five permanent members of the UN Security Council.