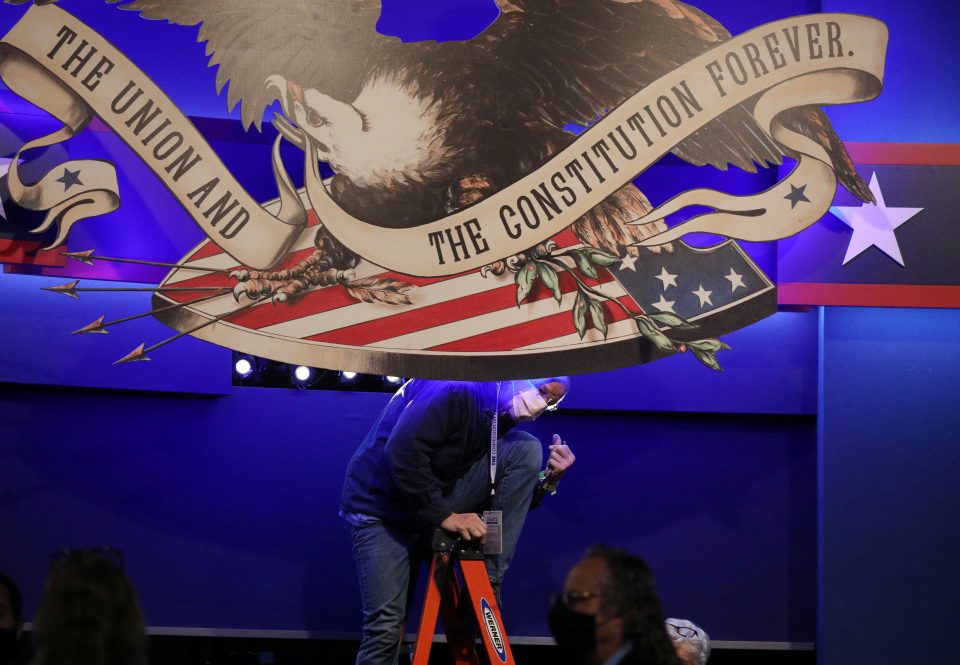 Crew members work on the set-up of the debate facility, a day ahead of the vice presidential debate

Vice President Mike Pence and Democratic vice presidential nominee Kamala Harris were set to face off on Wednesday in their only debate, as President Donald Trump’s coronavirus diagnosis and the pandemic continue to roil the U.S. presidential contest.

The televised encounter in Salt Lake City, Utah, comes after the Republican president announced last Friday that he had tested positive for the coronarivus amid a White House outbreak.

Former Vice President Joe Biden, the Democratic presidential nominee, is leading Trump in national polls, including an advantage of 12 percentage points in the latest Reuters/Ipsos survey of likely voters, with less than four weeks until the Nov. 3 election. Polls show the race to be closer in some of the election battleground states that could determine the winner.

The two campaigns have squabbled over installing barriers on stage between Pence and Harris to guard against infection. Early on Wednesday, television images of the debate stage showed two plexiglass barriers, one adjoining each lectern.

Harris had requested plexiglass shielding. Pence spokeswoman Katie Miller on Monday mocked Harris, saying if she “wants to use a fortress around herself, have at it.”

Both Pence and Harris, a U.S. senator from California picked by Biden in August as his running mate, tested negative for the coronavirus on Tuesday. Current U.S. government guidelines call for anyone exposed to a person with COVID-19 to quarantine for 14 days regardless of test results.

In a statement, Harris spokeswoman Sabrina Singh said, “If the Trump administration’s war on masks has now become a war on safety shields, that tells you everything you need to know about why their COVID response is a failure.”

With two septuagenarians at the top of the ballot – Trump is 74 and Biden is 77 – the debate could take on greater importance. Pence, 61, and Harris, 55, will seek to demonstrate that they could step into the Oval Office if necessary to lead the country. Pence has been an ardent defender of Trump during his tumultuous presidency.

Trump returned to the White House on Monday after three days at Walter Reed National Military Medical Center in Maryland. It is unclear when he will again be able to campaign. Trump on Tuesday said he looked forward to the Oct. 15 presidential debate, the second of three scheduled encounters with Biden.

The pandemic is likely to dominate the Pence-Harris debate. Biden and Harris have made Trump’s handling of the public health crisis a central theme of their campaign, blaming Trump for downplaying the health risks and failing to endorse mask-wearing to combat the spread of the pathogen.

Pence, who has headed up the administration’s coronavirus task force, can be expected to defend Trump’s response to the pandemic, which has killed more than 210,000 Americans and battered the U.S. economy even as other wealthy nations have managed to get it under better control.

Viewers will have a constant reminder of the pandemic’s effect on daily life. Pence and Harris will be placed more than 12 feet (3.6 meters) apart on stage at the University of Utah, in addition to the plexiglass barrier.

In preparation for the debate, Harris received help from former Democratic presidential primary rival Pete Buttigieg, a former mayor of South Bend, Indiana, who is familiar with Pence’s past record when he was governor of the Midwestern state.

The debate is unlikely to match the chaos of the first presidential debate last week in which Trump repeatedly interrupted Biden and the two traded insults. Pence, who once hosted a radio show, and Harris, a former prosecutor known for sharp questioning during Senate hearings, are seen as polished communicators.

A Biden campaign official said Harris has prepared for Pence to attack her as too liberal, which would echo Trump’s assertion that the moderate Biden would advance a “radical left-wing” agenda if elected president.

Kvitova and Kenin through to French Open semis

Coronavirus: Travel agents urged to ‘roll up sleeves’ and get to work for 2021