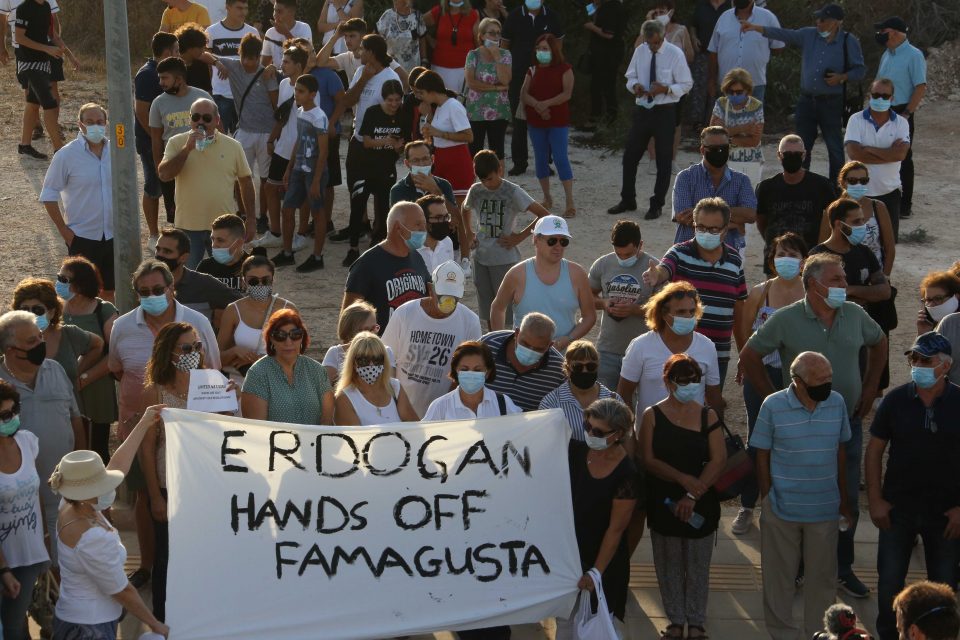 Hundreds of people gathered Thursday at the crossing point in Dherynia to protest the opening by authorities in the north of a stretch of the coast in Varosha, with the government saying it’s high time the European Union demonstrate its support for Cyprus with concrete actions.

Holding banners reading “Turkey – hands off Famagusta” and “We are the lawful owners,” refugees from Famagusta chanted slogans and sang patriotic songs as they demanded Turkey cease its illegal actions in the fenced-off area of Famagusta.

Also in attendance were a number of politicians.

In a statement, Famagusta municipality denounced the Turkish action.

“With all our might, we shout that Famagusta belongs to her rightful owners, not to Ankara’s placemen.”

Speaking at the gathering, Famagusta mayor Simos Ioannou called for a resumption of reunification talks as soon as possible, otherwise “we will lose Famagusta.”

“We cannot rely on foreigners, as it’s been proved that [Turkish president Tayyip] Erdogan can flout international law and do whatever he wants.”

Government spokesman Kyriacos Kousios, who happens to hail from Famagusta, told reporters there that the Republic of Cyprus would take all possible responses.

“The government shall not remain idle. On the contrary, from the first moment we have been active on all levels and we continue to be so,” he said.

Kousios said President Nicos Anastasiades would be raising the matter of Varosha at the upcoming summit of EU leaders, where he would be posing some “raw questions” to his counterparts.

“How has the grace period given for diplomacy, worked out? Can Turkey be tamed with words alone? Our partners must realise that appeals will not make Mr Erdogan come to his senses.”

He was alluding to the outcome of the previous week’s EU summit, which – to Nicosia’s disappointment – amounted to a promise to review Turkey’s behaviour come December and only then consider sanctions against Ankara.