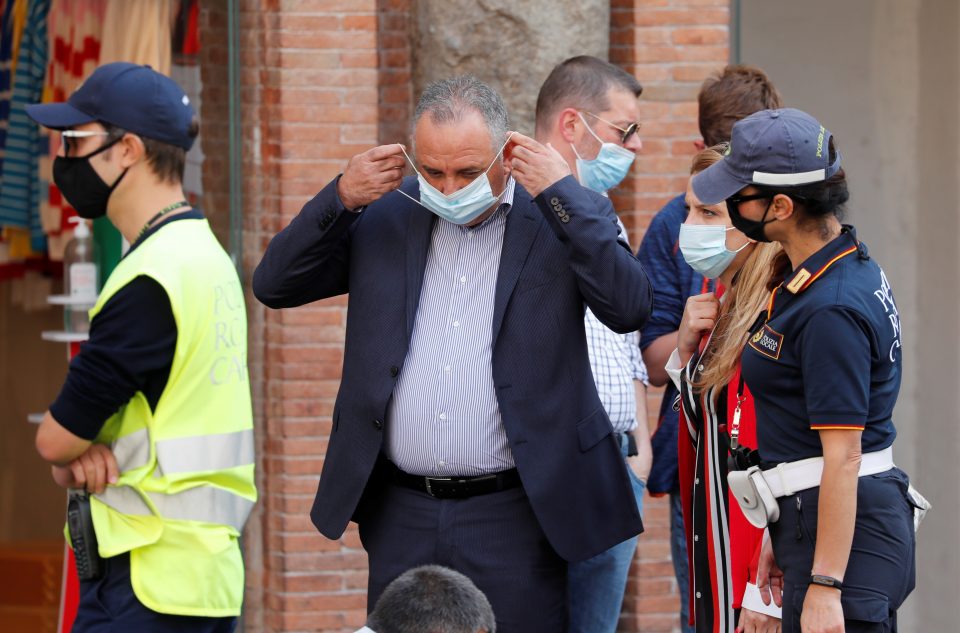 Police checks if people wear masks, as local authorities in the Italian capital Rome order face coverings to be worn at all times out of doors in an effort to counter rising coronavirus disease (COVID-19) infections, at Trevi fountain in Rome, Italy October 6, 2020. REUTERS/Remo Casilli

Italy  made it mandatory to wear face masks outdoors nationwide in an effort to curb the spread of the coronavirus, as new infections jumped to the highest daily tally since April.

The decree was approved at a cabinet meeting after a steady increase in cases over the last two months. It will probably be effective from today Thursday, a government source said.

Several Italian regions including Lazio, around the capital Rome, had already made face masks mandatory.

Italy is still recording far fewer daily cases than other large European countries such as France, Spain and Britain.

As a part of Rome’s effort to curb contagion, Health Minister Roberto Speranza on Wednesday ordered compulsory testing on travellers from the United Kingdom, Belgium, the Netherlands and Czech Republic.

Italy was the first country in Europe to be hard-hit by COVID-19 and has the second highest death toll in the continent after Britain, with 36,061 dying since the outbreak flared in February, according to official figures.

Thanks to one of the strictest lockdowns in the world, the government managed to get the contagion under control by the summer but infections are now rising fast.

However, daily COVID-related deaths remain far lower than during the first wave of Italy‘s epidemic six months ago.

Some 31 people died of the virus on Wednesday, the Health Ministry said, while April 24, the last day with more than 3,000 cases, saw 420 deaths.

The cabinet on Wednesday also approved a decree to extend the COVID-19 state of emergency to Jan. 31.

The state of emergency, originally due to expire in mid-October, gives greater powers to central government, making it easier for officials to bypass the bureaucracy that smothers much decision-making in Italy.