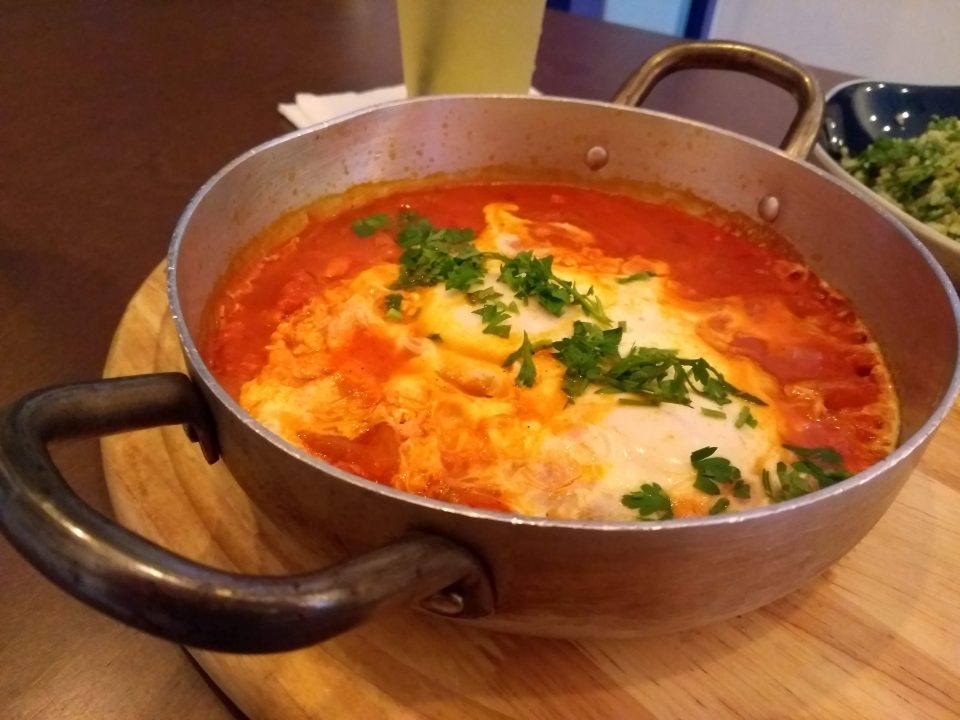 Most people have a distorted perception of national cuisines beyond their own, often possessing a somewhat warped idea of what comprises a nation’s eating habits.

Having not had a great deal of experience with Israeli cooking myself, I was intrigued by the prospect of visiting Mitbah, just off Anexartisias in Limassol, at the Tepak end of the street.

Mitbah, founded by Israeli Masterchef winner Erez Einav, describes itself as a ‘family israeli kitchen’ and that’s a fair description. The restaurant is a fairly compact establishment with simple, clean decoration. Its white walls are adorned with images from Israel, with street signs directing you to Tel Aviv, or Rehov Jean Jaures, named after the French socialist who was assassinated by a nationalist in Paris in 1914.

Mitbah has tall tables, seating around six at most, and wooden stools. It also has a shelf-like plank of wood fixed on its West-facing outer wall serving as an outside table of sorts. It’s a casual place, where you can pop in for a quick bite or grab some food on the way home after a night in the old town. While they don’t take reservations, they politely told me “call us twenty minutes before you get here and we’ll sort something out for you”. There was no need as there was ample seating available upon my arrival.

Israeli cuisine has its staple items, of course, but it is also an amalgamation of influences, incorporating the influence of an evolving culture, as well as the tastes of Jewish people from around the world. The menu includes chicken schnitzel, an Ashkenazi addition, shakshuka, a Mizrahi addition, and Tabbouleh, a Levantine dish. Suffice to say that our East Mediterranean corner of the world has a lot of culinary overlap.

We started with a main dish of Lamb and Hummus, which came with pitta bread, falafel and pickled vegetables, including onions and chilli peppers. The lamb mince is served over the hummus and also comes with chickpeas and is garnished with olive oil, parsley and spices.

The hummus was very creamy and served as a nice accompaniment to other dishes as well, including the falafel that came with the meal, which was crispy on the outside and soft and fresh on the inside. I was pleasantly surprised at the spices used on the hummus, including cayenne pepper if I’m not mistaken, which packed an above-average kick I hadn’t experienced with other hummus dishes before.

Their tabbouleh salad was quite distinctive, with zesty lime flavours mixed with fresh mint giving it a wonderful flavour. This flavour profile was also found in their homemade lemonade, which they serve by the cup.

We also tried the shakshuka, which was wonderful, especially when dipping the pitta bread in its tomato sauce. However, I was expecting a little bit more spice here, something akin to that used in the hummus. I will say though the mildness would make the shakshuka an ideal breakfast item, so I can see the reasoning in keeping the flavour profile on the timid side. The eggs were cooked perfectly, with the yolk still runny.

Last but unquestionably not least, we tried the Arais, which I had never heard of before. Arais looks like a combination of a burger and a turnover, or perhaps a folded and significantly improved Lahmajun. It’s essentially crispy pitta bread, stuffed with spiced lamb and beef mince, cut in triangles, and served with tomato salsa and tahini sauce. It is very simple and one of Mitbah’s nicest dishes, at least in my limited experience.

I would definitely eat there again, although I am tempted to utilise the online ordering service in the future, perhaps ordering the shakshuka on a Sunday morning and the Arais and hummus dish at night. Their dessert menu contains one item, muhallebi, which is firmly on my agenda for next time.

HOW MUCH €7 for a main dish, €4-6 starters and smaller items

Hopefully, the above information has clarified things for you. As it was previously mentioned, if you are not sure whether you want to allow the cookies or not, it is usually safer to leave cookies enabled in case it interacts with one of the features you use on our Site. However, if you are still looking for more information, then feel free to contact us via email at [email protected]l.com